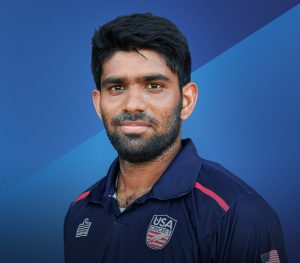 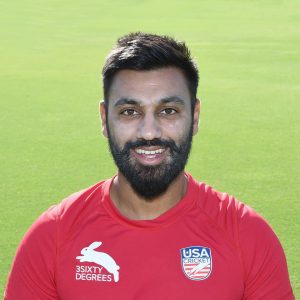 He took 2 catches behind the wicket, effected 2 sharp stumpings behind the stumps, and yet that was not the best he did in the game! Jaskaran Malhotra saved his best for the last, scored a steady, unbeaten 66 to anchor the USA juggernaut and ride it to the ‘for-long-been-elusive’ harbor called “WCL Division Two”. And before Malhotra showed his heroics, the captain, the man-of-the-match, led from the front. Saurabh Netravalkar was impeccable to say the least as he ended the game with figures to envy for – 8.1 overs 1 maiden 19 runs and 3 wickets.

It was a day history was going to be written for USA Cricket. And it turned out a day when Saurabh Netravalkar finally won the toss for the first time (when it mattered the most) in the tournament. USA made the canny decision of bowling first in a game where the opposition was worried about the Net Run-Rate (NRR) Math. Captain Netravalkar led from the front, bowled a maiden to start the Singapore innings and ended his first spell at 4 overs 1 maiden 8 runs – inside the Powerplay to set the tone for the spinners to capitalize on.

Roy Silva, coming in as the second change, was the ‘man with a golden-arm’ as he broke a dangerous looking 47-run opening stand between Arjun Mutreja (century scorer against USA the last time these 2 teams faced-off) and Aritra Dutta. Silva induced a slog from Mutreja who tried to force the issue in pursuit of a large target but ended up top-edging to Malhotra behind the stumps. Noshtush Kenjige kept it tight from the other end. With Timil Patel bowling in tandem, they tightened the screws as Singapore were 114 for the loss of 4 wickets at the half way stage of their innings. The highlight was Malhotra’s sharp glove work to get rid of Suryawanshi as he plucked the ball out of thin air and whipped the bails in a flash! With the top 3 and the captain Surywanshi back in the pavilion, Singapore were in a very delicate space and some “method to madness” was the need of the hour. In the quest for a hefty total to bat USA out on NRR, Singapore were going a little too hard than necessary and kept losing wickets at regular intervals.

With spinners getting considerable assistance from the pitch and the Singapore batsmen, Netravalkar made some smart bowling changes as he took off Timil and introduced Hayden Walsh. That was a good move in the context of the game as USA wanted to make it even more difficult for the Singapore batsmen who were going hard at every other ball. A new bowler at this point meant that the set batsmen Gaznavi, who had seen enough of Timil, was disturbed as he faced a different kind of leg spinner in Hayden Walsh. And Walsh did not disappoint as he trapped Gaznavi right in front of the stumps in the 29th over to rock back Singapore even further. The spinners continued tightening the grip over the game and Singapore batsmen, Manpreet Singh in particular, helped by not rotating the strike enough. By the end of 35 overs, Singapore were already 6 down for only 140 runs on the board. The spinners by then had combined figures of 25 overs 4 maiden 93 runs and 5 wickets – primary triggers for the Singapore collapse.

With game well and in control, Netravalkar brought himself on – yet another inspired bowling change of the day. Singapore batsmen had no answer to Walsh’s spin, nor to Netravalkar’s immaculate bowling. Finally, in the 40th over, Saurabh got reward for his brilliant bowling as he poached 2 wickets to send Singapore reeling at 151 for the loss of 8 wickets. The formalities were then completed as Timil got his 2nd wicket and Netravalkar scalped a 3rd one to seal his man-of-the-match award.

Chasing 162, USA were the favorites and they batted like one. Targets like these can be tricky, especially if you lose early wickets. But USA could not have asked for a better start. Both Monank and Jaskaran came out positive and USA raced off to 34 off the first 4 overs with each batsmen scoring a trio of boundaries in a single over each. Singapore introduce spin in the fifth over and get the reward almost immediately as Monank sliced Abhiraj Singh to be caught at short-third man. Steven Taylor came in at 3 and continued from where Monank left as he cut the very first ball he faced to the ropes. Taylor scored a quick-fire 23 before he flat-batted Janak Prakash to a leaping Paraam at mid-on, who safely pouched the catch. USA 63 for the loss of 2 wickets at the end of 7 overs – still going strong.

If Singapore were to win, their only bet was to get USA all out and so, wickets meant everything to them. However, Aaron Jones and Malhotra had different ideas as they strung together a 40-run stand to take the USA total past the 97-run mark which guaranteed USA the promotion to WCL Division 2 based on NRR. Soon after, Jones was unfortunately run-out in a terrible mix-up with Malhotra. Hayden Walsh came in next but did not last long as USA slumped from 103 for 2, to 105 for 4.

The promotion was clinched, but the game was still at stake. Another wicket here and Singapore would be leading the “who will win this game” poll. But it was not to be. Hero from the game against Oman, Jan Nisar Khan strutted out to the wicket and batted with no fuss – batted with dominance, just the way USA dominated Singapore in this game. Jaskaran Malhotra, at the other end, notched up a 63-ball half century with an array of fours and sixes all around the park. Jan Nisar levelled the scores with a six and fell off the very next ball. Roy Silva came out to score the winning run with a loft over cover and Malhotra had an unbeaten 66 to his name.

Celebrations began as USA’s drought of making it to the WCL Division 2 was finally overcome. Thus, USA Cricket’s remarkable journey from Division 5 to the verge of the ODI Status was propelled this morning in Oman courtesy an amazing batting display by wicket-keeper opening batsman Jaskaran Malhotra and the skipper Netravalkar leading from the front.