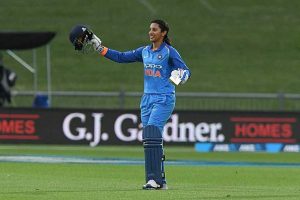 The Indian cricket is having a gala time in New Zealand, thanks to the stupendous show put up by both, the men’s team and the women’s team. Where Virat Kohli and his men have taken an indisputable lead of 3-0 in the five match ODI series, Mithali Raj and co. are left not too far behind as they quietly take an unassailable lead of 2-0 in the three-match ODI series against the White Ferns.

India’s dashing opener Smriti Mandhana was at her supreme best in the first two ODIs as the Maharashtra player scored an aggregate of 195 runs. The southpaw deservingly bagged the Player of the Match award for her scintillating knocks at the top of the order. First with Jemimah Rodrigues (81 not out) and then with Mithali Raj (63 not out), Mandhana has had a wonderful outing so far.

Batting first in both the matches, New Zealand could not go past 200. This shows that the visitors bowled really well in tandem and tamed the White Ferns from scoring freely. The senior-most bowler in the Indian line-up went wicketless in the first game but made a strong comeback in the second ODI as she struck with 3-23 in her 8.2 overs. Jhulan Goswami was ably supported by the spin quarter of Ekta Bisht, Poonam Yadav, Deepti Sharma, and Dayalan Hemalatha. Shikha Pandey was the other pacer who kept things tight at the other end with Goswami. In the first game, the spinning duo of Ekta Bisht and Pooman Yadav wrecked havoc as they scalped three wickets each, swiftly running through the New Zealand batting.

The Women in Blue have won both the matches comprehensively, giving no chance to the hosts to make a comeback in the series. The White Ferns will look to redeem themselves on Friday as the two sides meet for the one last time in the 50 over format, before they take off for the three-match T20 series.