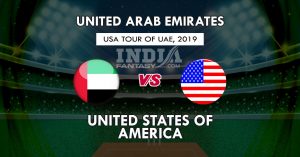 A famous Afghan poem says – “Pull up your sleeves, come onto the streets and start dancing, because happiness is rare in a poor man’s life”.

From the very first report of cricket in the US in 1751 (when they played Zimbabwe) to making their T20 International debut against UAE tomorrow (March 15, 2019) at the ICC Academy in Dubai – this has been a dream long wished for. USA will become the 28th nation to play T20 International cricket and this marks a historic day in the chronicle of USA Cricket.

The T20 series comprises of two Twenty20s to be played on consecutive days (March 15 and March 16, 2019). The T20 series would provide a blueprint for USA cricket for the upcoming T20 World Cup Qualifiers towards the end of 2019.
USA Cricket has also confirmed that Team USA and UAE will face off in three 50-Over clashes, and a further three 50-Over matches between a UAE XI and Team USA. Team USA will also play a game against county side, Lancashire, on Tuesday (19th March, 2019) at the ICC Academy in a 50 Overs match.

All these matches would serve as a manifesto for USA to build up to the much anticipated and imperative World Cricket League (WCL) Division Two in Namibia next month.

The USA squad looks pretty settled to start with. USA would be banking on solid starts up the order from Monank Patel and wicketkeeper, vice-captain Jaskaran Malhotra. The top order has been bolstered with the inclusion of former West Indian Test cricketer – Xavier Marshall. The middle-order seems to be in safe hands of the Jamaica-contracted batsman Steven Taylor and the Barbados-contracted pair of Aaron Jones and Hayden Walsh. The bowling department would have services of Timil Patel and Nosthush Kenjige with (captain) Saurabh Netravalkar, Ali Khan, Elmore Hutchinson and Jessy Singh taking care of the pace department.  Jannisar Khan and Roy Silva are the all-rounders in the 14-man squad.

The biggest beneficiary of this T20 series in the UAE could be Jannisar Khan. This series can be used to serve out the 2-match ban that he received during USA’s match against Singapore during the WCL Division Three in Oman. What it then means is, Jannisar Khan will be fully available for the WCL Division Two, and would reinforce his side in the race to secure ODI status through 2021.

The T20 debut against UAE will be a moment of history when the USA players get their debut caps and walk on to the field in Dubai tomorrow. While nerves would run high for USA players, words of Norman Mailer could be the lighthouse – “It’s not the sentiments of men that make history, but their actions.”