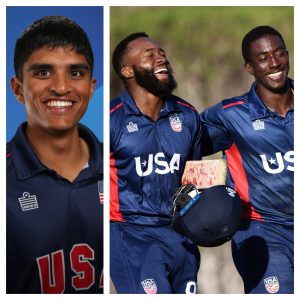 3000 km away from where the “Nomads went above and beyond for Test Cricket” to create history and script Afghanistan’s maiden Test Cricket win, USA Cricket team scripted (arguably) their biggest ODI win beating Lancashire by 6 wickets with 18 balls to spare!

“History repeats itself” is not just a cliché. 116 years since their forefathers (Gentlemen of Philadelphia) beat Lancashire in 1903, the current USA Cricket team beat Lancashire convincingly to announce themselves well and truly on the world stage. With the upcoming WCL Division Two in Namibia next month, this win over the English County side serves as a profound groundwork and spells it out to the opponents that USA are here to come out and win!

It is a batsmen’s game (especially limited overs cricket), but it is often the bowlers who will win you games. Slow left-arm orthodox, Nosthush Kenjige, proved this with career-best figures of 10 overs 4 maidens 27 runs and 5 wickets – ripping through the Lancashire top-order which comprised of English International openers Keaton Jennings and Haseeb Hameed.  Twin-fifties from opening batsman Xavier Marshall and middle-order champion Aaron Mac Jones sealed a comfortable win for USA as they won their second 50-over game in as many days at the ICC Academy in Dubai.

USA Captain Saurabh Netravalkar finally called it right and USA won their first toss of the UAE tour. On a dry track with sun beating down, Saurabh put Lancashire into bat with Timil Patel replacing Roy Silva. Jennings and Hameed opened the innings for Lancashire, while Steven Taylor shared the new ball with captain Netravalkar. Taylor, Netravalkar and Jessy Singh kept it tight but were unable to make any inroads with Lancashire steadying at 34 for no loss at the end of 9 overs. An inspired bowling change and there was a Lancashire top-order collapse – as Lancashire slipped from 37 for no loss to 85 for 6 – courtesy Nosthush Kenjige’s guile, accuracy and patience.

Kenjige got the priced wicket of out-of-form Keaton Jennings – bowling over the wicket and angling the ball across Jennings who played for spin to an arm-ball which went straight and kissed his bat into Jaskaran’s gloves, who took a smart catch. Josh Bohannon came in at number 3 and strung together a good partnership with Hameed who scored freely off Jessy Singh and Timil Patel at the other end while Kenjige kept it tight on one end. However, the party did not last long for Lancashire as the wily Kenjige pulled his length a little, slowed down the pace, got the ball to stick in the wicket and induced a leading edge off Bohannon who scooped a simple catch to Singh at mid-wicket. And that was the trigger to a major collapse as Lancashire then lost 5 wickets for just 14 runs with Kenjige picking his career-best figures. Among the collapse was the big wicket of Hameed (46 off 53 balls) courtesy a sharp run-out inflicted by Hayden Walsh Jr. from backward point and a smart collect by wicketkeeper Malhotra. The importance of fielding in modern day cricket is no longer a mystery and the amount of value that leg-spinning all-rounder Hayden Walsh Jr. brings to this USA team is a no-brainer either.

The repair work was then upon 20-year old Tom Hartley and 18-year old George Lavelle. They saw off Kenjige and stayed steady at the crease to take the score to 122 for 6 before Steven Taylor produced an edge taken superbly at first-slip by Xavier Marshall, diving low to his wrong-side, to send Lavelle back. Hayden Walsh was bowling well in tandem from the other end and got just reward for some tight bowling as he got Liam Hurt clean bowled to a skidder that stayed low. Hartley realized he was running out of partners and began to cut loose, playing beautifully with the tail (well supported by Toby Lester who lasted 24 balls). Hartley was brilliant as he picked the right balls to hit, rotated the strike beautifully and shielded his partner against the USA bowling attack. Since the wicket of Hurt, Hartley played 50 off the next 84 balls played in the Lancashire innings and scored 63 runs from it – quite a remarkable effort giving the Lancs something to bowl at. Jessy Singh ended with 2 wickets while Taylor and Walsh ended with a wicket apiece.

Chasing a target of 222 (double nelson), USA got off to the worst possible start losing opening batsman Monank Patel who tried to pull a short ball from Liam Hurt but was beaten for pace and holed out at mid-off for a first-ball duck. The star batsman from the T20 series, Steven Taylor, came in at number 3. He did not last long either and was dismissed by Hurt for 7 and USA were in trouble at 24 for 2 in 5 overs. Man-of-the-match from the first game, Aaron Mac Jones came in at number 4 and joined forces with the Jamaican, Xavier Marshall, and they put on a stellar 116-run stand to not only take USA out of trouble but to also kill any momentum and hope for a win that the Lancs had. The rotation of strike was perfect, and so was the caution-to-aggression approach with singles galore and an odd boundary somewhere in the mix. Xavier Marshall reached his fifty off just 63 balls with minimal risk while Jones was going his own merry way at the other looking in no mood to gift his wicket to the opposition. While the 2 batted, it seemed there was no teeth in the Lancashire bowling nor any demons in the wicket that were on show while Kenjige bowled his man-of-the-match spell. Now, if this reflects whether Kenjige was extraordinary with the ball or if Marshall-Jones duo were better than the Lancashire batsman is a question up for endless discussion!

A beautiful leg-spinner from Parkinson sent Marshall back to the pavilion for a well made 75. Maybe a century was up for the grabs, but you know it does not always work that way in cricket! Jaskaran Malhotra came in next and USA had a clear plan to finish the game as soon and as safely as possible. And that was clear as Jaskaran smashed Bohannon for mighty six over long-on to get his innings underway. He tried to replicate the same against Parkinson, this time over extra cover – but failed and was caught at wide long-off – trying to force the issue, on occasions one too many. Lancashire might be thinking of a sniff here. But, in came Hayden Walsh and came with him the calm that USA batting needed to see off the remaining 64 runs required. Jones completed his half-century and finished with an unbeaten 84 off 138 balls while Hayden Walsh scored a no-nonsense and crisp 31-ball 33* to drive USA home to their biggest 50-over win.

Two dominating wins in two days and the USA team will have nice rest day tomorrow before they take the field again on March 21, 2019 against the UAE XI. While there were plenty positives to take from this game, USA would like to improve on their ability to clean up the tail so that they don’t end up chasing scores like 222 (which can be tricky) instead of what could well have been around the 150 mark.

Special mention to the ‘Dubai Sports City’ for streaming this game LIVE for fans across the world!