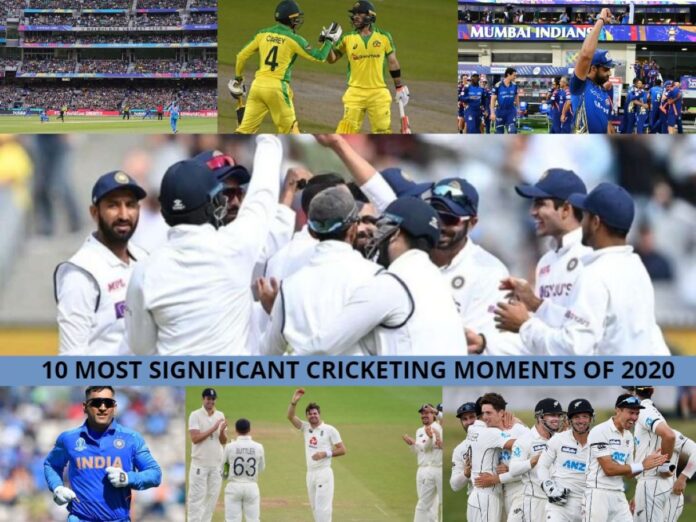 Cricket in 2020 began and ended with a bang. Quite contrasting to how the year was to unfold in the middle, the first and the last quarter witnessed ample cricketing action. The year-ending Test series down under in Australia and New Zealand also saw a return of spectators to the stadium, paving way for an even more cricketing start to 2021. Here’s a look at the 10 most significant cricketing moments from the year gone by.

2020 marked the beginning of well-deserved fame and attention to Women’s cricket. On the eve of the Women’s T20 World Cup Final in Australia, as many as 86,174 people gathered at the iconic MCG to witness the defending champions and hosts, Australia take on the mighty Indians. The entire stadium seemed to erupt in joy and excitement as it would in a crunch men’s game. Yes, there was also a Katy Perry concert preceding the sport, but the exhilarating atmosphere was a testament to women’s cricket consistently yielding riches around the globe.

Courtesy of Alyssa Healy’s squash-buckling hundred, the Australians completed an easy win and a hat-trick of titles. The day though went down in the history as the best day Women’s cricket has ever witnessed.

In recent years, we all have often associated England, and England Cricket, with swing bowling. The one player to make this association so strong is the man from Lancashire himself, James Anderson. The right-hand fast bowler created history this year against Pakistan as he went onto become the first-ever seam bowler to take 600+ wickets.

Anderson’s fast bowling, especially with the red ball, has been formidable right since the start of his career, but the most astonishing aspect of his journey has been his fitness, endurance, and the sheer passion and confidence in his game to play for so long. Interestingly, he’s only improved with time and age, scalping more wickets, at an even better average and strike-rate in the last six years than before. He, alongside Stuart Broad, has almost single-handedly lent spine to the English bowling with an epitome of consistency, accuracy, and wicket-taking ability. Anderson, only the fourth bowler to reach 600 wickets, achieved the feat by dismissing Pakistan skipper Azhar Ali – caught at slip, a trademark Anderson has proudly held for 17 years now.

The return of cricket on the international stage came as late as July with England hosting West Indies in a 3-match Test series at home. Beginning at Southampton, one expected England to complete three cruising wins against a comparatively lesser West Indies. However, the underdogs, often spoken about for their passion and love for the game, began with a bank winning the first Test by 4 wickets. Shannon Gabriel, Kraig Brathwaite, Jason Holder, and Jermaine Blackwood starred with sound performances with the bat and ball respectively. Led by a calm, composed, and flamboyant captain, and also arguably one of the most under-rated cricketers in the world, Holder’s West Indies renounced their belongingness to the sport with the win.

England remained the epicenter of all the cricketing action this year sporting their busiest summer in ages. The English team hosted neighbors Ireland for a 3-match ODI series, also marking a kick-off to their World Cup Super League campaign. As predicted, England had it easy in the first two games but the moment of the year came in the third, where the Irish batsmen fought valiantly to win the Third ODI. Massive tons from Paul Stirling and captain, Andrew Balbirnie and a finishing flare from Ireland’s lucky-charm, Kevin O’Brien took Ireland home. The 326-run chase is sure to go down in the history books, establishing an Irish seat back at the world cricket’s center table.

Was it the biggest set-back of 2020? Maybe not, given how Dhoni had himself smartly planned it over. The maestro, who played no cricket at all since the 2019 World Cup, quietly hung up the boots at 7:29 pm on August 19th. 2020. Incidentally, it was the exact time when Guptill had caught him short of the crease in that heart-breaking World Cup semifinal loss.

MS Dhoni came into the Indian team quietly but left even quieter. Throughout the 16 years of his career, he was resourceful, intuitive, supportive to the young, and confident with his plans. Even as a wicket-keeper, Dhoni was quick, smart, and at times, even innovative. He had the fastest hands and the quickest hand-eye co-ordination against anyone in the cricketing circuit. He knew the best of the team and always played for the interest of it, his retirement, be it from Tests or from white-ball cricket, being proof. Simon Taufel, the legendary umpire had said, “MS Dhoni is the best cricketing mind I have ever seen.” It would only be fair to go even further and quote, “He newly taught cricket to many of us fans.” Such was the aura, impact, and influence of MSD on cricket. MSD, you’ll be missed!

Australia toured England for only a brief 3-match ODI and T20I series before the beginning of the IPL in the UAE. Tied 1-1 in the ODI series, the Australians pulled off one of their most crucial wins in recent times. Struggling 73/5 on a Manchester wicket, chasing a mammoth 303-run total, Australia was all but out of the context. With virtually the last of the recognized batting pair of the crease, the only question raised in the empty stadium was how close could the visitors get to the total. As it turned out, the Aussies not only got close but also found themselves on the winning side, courtesy of a match-winning 212-run partnership for the 6th wicket between Glenn Maxwell and Alex Carey. The stand, full of intent, positivity, extra-ordinary hitting, and calculated risks snatched victory from the jaws of defeat against the reigning World Champions. Incidentally, it was Maxwell’s first series returning to cricket after a mental breakdown, and the all-rounder trumped against all odds winning the Man of the Series award.

One of the biggest challenges cricket faced in 2020 was the scheduling and consequent execution of the bio-bubble. While England set up the example by being the first country to host an international cricket match, other countries followed. There were a number of domestic T20 leagues that were played, also with an intention of attaining financial stability.

The Indian Premier League (IPL) was hosted in the UAE after the cancellation of the T20 World Cup. Bio-bubble established across Dubai, Sharjah and Abu Dhabi ensured all the safety and strictness but importantly, gave the players as well as the fans to witness the live sport. The league saw stalwarts of the game compete at the highest franchise level. As it turned out, IPL 2020 was the closest and the most competitive iteration, the tournament ever witnessed. Though Mumbai Indians eventually won it with ease, IPL 2020 included the world’s first double super over, numerous close finishes, some jaw-dropping catches, fielding efforts, a few scintillating knock with the bat, and many insane performances with the ball. The quality of cricket played in the IPL 2020, set up a benchmark, even for itself, to match in the future.

It was much easy to shut it off by blaming it on the year 2020, but India’s performance in the second innings of the Adelaide Test was their worst ever. With a slender lead in the first innings, Indians went in to bat in the last session of Day 2. However, the entire team bundled up in space of an hour, the next morning. They fell like hairpins and Shami’s forearm fracture paved the most suited end to India’s innings at the score of 36. All of India’s efforts to stay on top after the first 2 days had gone in vain and there remained no explanation to the happenings on that Saturday morning in Adelaide. India’s previous lowest total of 42, came in and against England in 1974 to what was referred to as India’s dreadful Summer of 42. Safe to say this one against Australia is India’s freezing Winter of 36.

There is no more fitting reply to a drubbing loss than a clinical win. The Indians moved on from the horrors of Adelaide and void of Virat Kohli and Mohammad Shami to construct their most clinical overseas win ever in the Boxing Day Test at Adelaide. The team literally completed an entire circle, first building the team, then instilling the confidence, and finally sealing the win with a rather ease and finesse. The contribution from the bowlers, the might of the batsmen, and a well-thought and executed planning from the stand-in captain Ajinkya Rahane remained the highlight of the win. Rahane’s century in the first innings was also a delight to watch helping India gain a strong lead in excess of 100. Indian team’s gritty and determined batting display on the second day of the Test was perhaps most pivotal, given the kind of hardships, threats, and disciplines the Indian batters negated. It was arguably the best day of play in Test for India this decade.

The win also set up the series 1-1 with all to play for in the remaining two games. But more importantly, devoid of most of their key players, it stamped a statement emphasizing the stature and ability of Indian cricket.

Should Tests be made a 4-day affair? Is a discussion that has seen the light of the day in the latter half of this decade. Pakistan and New Zealand towards the end of the year played one such match justifying the need for a 5th day. Often the struggle to survive, play through, and to sneak out of a loss is what drives Test cricket forward. The same was on display as Pakistan, nowhere near their target, tried to play out overs against New Zealand in the fourth innings.

8 overs to survive for Pakistan in Mount Maunganui. Good to see a test match going the distance and an old-fashioned battle of defiance to deny the opposition a win

Despite a couple of well-worked fifties and also a Fawad Alam hundred, the Kiwis had the better of Pakistani batsmen most times on a lush green Mt. Maunganui wicket. They were reduced to their last wicket with more than an hour to go. Shaheen Afridi and Naseem Shah, the two bowlers tried all that they could to keep the hosts at bay. In fact, they were successful in playing out as many as 8 overs with relatively no discomfort. Their sound defenses and the grit to stay at the crease also put some pressure back onto the Kiwis. New Zealand players were seen engaging in multiple discussions to pick up that elusive last wicket. The wicket finally came in, just 4 overs from the end of the day’s play as Mitchell Santner plucked one of thin air off his own bowling. The Test match was proof of the need for the fifth day of the Test and was arguably one of the most entertaining Tests to watch this year.