The 2020 edition of the Indian Premier League has been indefinitely postponed until further notice due to coronavirus pandemics which created so much damage to human life. It will be a big loss for those Indian players who were looking to return for the World T20 tournament to be held in October- November this year.

The 2019 IPL season was an amazing season with some sensational matches which went right down the wire and entertained the crowd to the fullest. In the 60 matches last season, there were some great individual performances from both bat and ball.

Here we look at the 5 Best matches of Indian Premier League 2019.

Before the finals, Mumbai Indians won all the 3 matches in league stages. The match was played at Rajiv Gandhi International Stadium, Hyderabad on 12th May.

Mumbai Indians captain Rohit Sharma won the toss and decided to bat first. Quinton de Kock and Rohit Sharma got the team off to a flying start putting pressure on CSK bowlers. Shardul Thakur got the breakthrough dismissing de Kock for a quickfire 29 off 17 balls with 4 sixes. Mumbai openers added 45 runs in 4.5 overs.  Deepak Chahar dismissed the other opener, Rohit Sharma. At the end of six overs, Mumbai Indians were 45 for 2.

Chennai Super Kings bowlers were superb as Imran Tahir 2 for 23, Deepak Chahar 3 for 26 and Shardul Thakur 2 for 37 restricted the run flow. Kieron Pollard hit some lusty blows to remain not out on 41 off 25 balls to help Mumbai Indians posted 149 for 8.

Chasing 150 runs to win, Shane Watson and Faf du Plessis got CSK off to a flying start. Krunal Pandya made the breakthrough dismissing du Plessis for a quickfire 26 off 13 balls.  Watson looked in great touch as CSK scored 53 for 1 at the end of six overs.

CSK were dealt major blows as Suresh Raina, Ambati Rayudu and captain MS Dhoni went in quick succession to be in big trouble at 82 for 4. Shane Watson was simply in great touch taking on Mumbai Indians bowlers as he reached his fifty off 44 balls. The Australian batsman carted Malinga for 20 runs in the 16th over to bring back the situation in favour of CSK. He then smashed 3 big sixes off Krunal Pandya in the 18th over to bring the situation in favor of CSK.

Jasprit Bumrah bowled a brilliant over giving away just 9 runs in the 19th over. With 9 runs needed off final over, Shane Watson was run out by a brilliant throw by Krunal Pandya for superb 80 off 59 balls. Lasith Malinga held his nerves off the final bowl as he dismissed Shardul Thakur to give Mumbai Indians a thrilling 1 run win to register their fourth title in IPL history.

The decision paid off for the hosts as Lammichhane dismissed Nikhil Naik cheaply. Chris Lynn looked in fluent touch while Uthappa played some good strokes before being dismissed by Harshal Patel. At the end of six overs, KKR were 36 for 2.

After the first six overs, Delhi Capitals bowlers kept a tight line and reduced KKR to 61 for 5. Andre Russell came to the crease and showed his power-hitting right from word go. It was an amazing display of batting by Russell and Karthik who kept the scoreboard ticking. Russell reached his fifty off just 23 balls which rescued KKR innings. Dinesh Karthik also completed his fifty off 35 balls. Chris Morris provided the much-needed breakthrough getting the wicket of Russell for a breathtaking 62 off 28 balls with 4 fours and 6 sixes. Russell and Karthik added 95 runs for the 6th wicket.

Piyush Chawla and Kuldeep Yadav added quick-fire 15 runs as KKR posted 185 for 8 in 20 overs.  Kagiso Rabada, Lammichhane, Amit Mishra and Chris Morris took 1 wicket each while Harshal Patel was the pick of bowlers with 2 for 40.

KKR bowlers kept a tight line and length which made life tough Shaw and Iyer. At the end of six overs, Delhi Capitals were 45 for 1.

Shaw and Iyer were simply sensational with their big-hitting which made life tough for KKR captain Dinesh Karthik.  Andre Russell provided the breakthrough dismissing Iyer for a superb 43 off 32 balls. Shaw and Iyer added 89 runs for the 2nd wicket. Shaw increased the scoring rate to reach his fifty off 30 balls.

After completing his half-century, Shaw made the batting look easy and kept Delhi Capitals in the hunt. Rishabh Pant struggled with his timing. Kuldeep Yadav struck for KKR getting the wicket of Pant for 11. Pant and Shaw added 54 runs for the 3rd wicket. Shaw fell in the next over for a superb 99. With 6 runs required off 6 balls, Kuldeep Yadav dismissed Hanuma Vihari to make the equation as 2 needed off 1 ball. Colin Ingram was run out which resulted in the Super Over.

Batting first, Rishabh Pant and Shreyas Iyer came to bat. Delhi Capitals were able to post just 10 runs with the loss of Iyer wicket. With 11 runs needed to win, Andre Russell smashed a boundary off the first ball. Kagiso Rabada bowled a brilliant yorker to get the wicket of Russell. Rabada held his nerves as Delhi Capitals gave away just 7 runs. For his superb 99, Prithvi Shaw was awarded the man of the match. 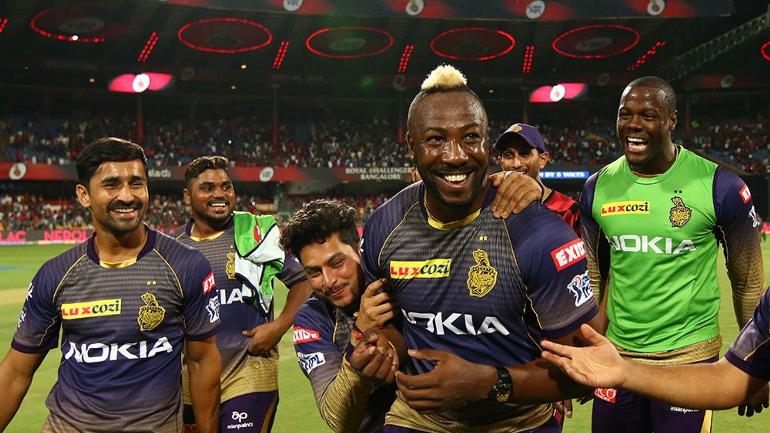 Kolkata Knight Riders played out of their skins to defeat Royal Challengers Bangalore by 5 wickets in the 17th match played at M Chinnaswamy Stadium, Bangalore on 5th April 2019. In that match, KKR captain Dinesh Karthik won the toss and decided to field first.

The experienced duo made the life tough for KKR bowlers be it spinner or pace bowler. Kuldeep Yadav finally got the breakthrough dismissing Kohli with a sharp return catch for 84 off 49 balls with 9 fours and 2 sixes. Kohli and de Villers added 108 runs for the 2nd wicket. Narine got the wicket of dangerous AB de Villiers for a superb 63 off 32 balls. Marcus Stoinis came to the crease and hit a quickfire 28 off 13 balls to help Royal Challengers Bangalore post 205 for 3 in 20 overs. Nitish Rana, Kuldeep Yadav and, Sunil Narine took 1 wicket each.

Chasing 206 runs to win, Chris Lynn and Sunil Narine got KKR off to a flying start putting 28 runs in just 11 balls. Navdeep Saini dismissed Narine for 10. Robin Uthappa came to the crease and put the pressure on RCB bowlers along with Lynn. At the end of six overs, KKR were 59 for 1.

Pawan Negi was bought into the attack and got the wicket of Uthappa. Uthappa and Lynn added 65 runs for the 2nd wicket. Nitish Rana joined in the party with some lusty blows. KKR captain Dinesh Karthik struggled as he scored 19 off 15 balls. With 53 runs required off 18 balls, Russell scored 23 runs in the 18th over. He then smashed 3 sixes and 1 boundary off Tim Southee in the next over. The hard-hitting batsman remained not out on 48 off 13 balls with 1 four and 7 sixes to help KKR register a memorable 5 wicket win with 5 balls to spare. For his sensational knock, Andre Russell was awarded the man of the match.

Thanks to a special knock by Kieron Pollard, Mumbai Indians defeated Kings XI Punjab in a last-ball thriller played at Wankhede Stadium, Mumbai played on 10th April. In the absence of Rohit Sharma, stand-in captain Kieron Pollard won the toss and decided to field first.

Kings XI Punjab openers KL Rahul and Chris Gayle got the team off to a cautious start. At the end of six overs, they scored 50. After the power play overs, they took on Mumbai Indians bowlers which put the pressure back on the hosts. The explosive left-handed batsman from West Indies, Gayle reached his fifty off just 31 balls while KL Rahul completed his half-century off 41 balls. Gayle was struggling with cramps and was finally dismissed by Jason Behrendroff for a superb 63 off 36 balls with 3 fours and 7 sixes. Kings XI Punjab openers added 116 runs in 12.5 overs. Mumbai Indians bowlers made a strong comeback by picking wickets of David Miller, Karun Nair and, Sam Curran.  KL Rahul took the charge, reaching his century off 63 balls to remain not out. Kings XI Punjab posted 197 for 4 in 20 overs. Hardik Pandya took 2 for 57, Bumrah and Behrendroff took 1 wicket each.

Chasing 198 runs to win, Quinton de Kock looked positive with his stroke play. At the end of six overs, Mumbai Indians were 50 for 1. Kieron Pollard promoted himself to number 4 and looked in sensational form right from word go. The West Indies hard-hitting batsman created panic among Kings XI Punjab bowlers and smashed his fifty off 22 balls. He then took on Sam Curran, Ravichandran Ashwin. Hardik Pandya contributed 19 off 13 balls. Pollard and Pandya added 41 runs for the 5th wicket. Krunal Pandya failed to contribute any runs.

Pollard teed off against the Kings XI Punjab bowlers and made life easy for Mumbai Indians. With 15 runs required off last over, Pollard hit a no-ball six and on the free hit smashed four runs.  He was then dismissed by Ankit Rajpoot off the next ball. With 2 runs required off the final ball, Alzaari Joseph hit 2 runs to give Mumbai Indians a 3-wicket win. Mohammed Shami was the pick of bowlers for Kings XI Punjab with 3 for 21. For his superb 83 off 31 balls, Kieron Pollard got man of the match award. 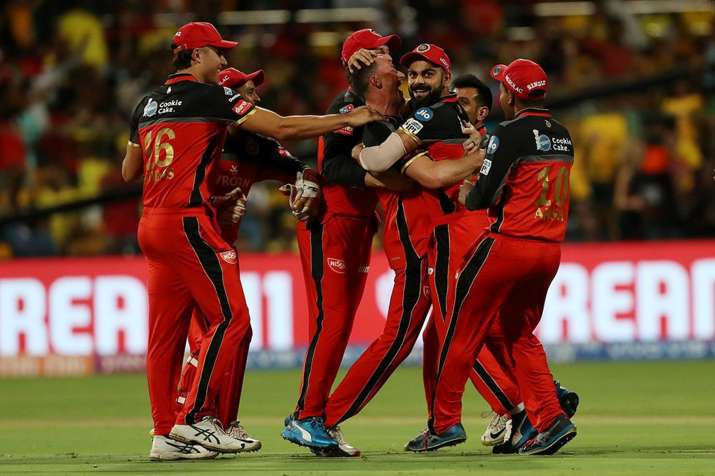 It was an ideal start for the visitors as Deepak Chahar dismissed Kohli cheaply for 9. AB de Villers and Parthiv Patel kept the scoreboard ticking with big strokes. At the end of six overs, RCB were 49 for 1.

After the power play overs, Ravindra Jadeja got the big wicket of AB de Villers. De Villiers and Patel added 47 runs for the 2nd wicket. Parthiv Patel looked in fluent touch while CSK bowlers kept picking wickets at regular intervals. Patel reached his fifty off 36 balls. Moeen Ali came to the crease and hit a quickfire 26 off 16 balls. RCB posted 161 for 7 in 20 overs. For CSK, Dwayne Bravo, Ravindra Jadeja and, Deepak Chahar took 2 wickets each.

Chasing 162 runs to win, it was not an ideal start as they lost wickets of Shane Watson, Suresh Raina, Faf du Plessis and, Kedar Jadhav. At the end of six overs, CSK were tottering at 32 for 4.

MS Dhoni came to the crease and looked in brilliant touch. He and Ambati Rayudu put the pressure back on RCB bowlers putting on 55 runs for the 5th wicket. While other batsman struggled, Dhoni created pressure to reach his fifty off 35 balls. With 26 runs required off final over, Dhoni hit 24 off first five balls. He was not able to put a bat as Patel ran out Shardul Thakur to give RCB a thrilling 1 run win. For his knock, Parthiv Patel was awarded the man of the match.