The number 1 ranked Test side in the world, India produced a dominating performance beating South Africa by 203 runs played at Vizag. It was a team performance by Virat Kohli led side who posted a massive total of 502 for 7. Rohit Sharma, Mayank Agarwal were the stars for Team India in the first innings.

Despite Quinton de Kock and Dean Elgar centuries, it was a great bowling effort to bowl out South Africa for 431. Again, the Indian batsmen scored at quick pace and declared their innings on 323 for 4.

The Indian bowlers did a great job in the 2nd innings too as they did not allow South African batsmen to score runs easily and bowled them out for 191 to take a 1-0 lead in the series.

There were some great individual performances from Team India side in the first side that led them to a big win. 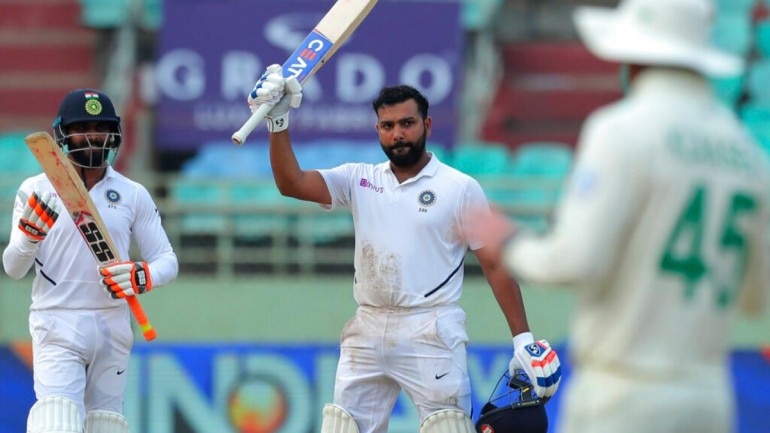 After succeeding in the limited overs as a opener, Rohit Sharma was given a chance to open the innings with Mayank Agarwal in the first Test match against South Africa at Vizag. He took time to settle against Vernon Philander and Kagiso Rabada at the start.

It was an amazing batting display by Rohit who reached his fifty off 84 balls. After reaching his fifty, Rohit changed his gears and took on South African spinners. His batting put the South African team under pressure. Rohit reached his century off 154 balls. At the end of day 1, the explosive right-handed remained not out on 115. On the 2nd day, Rohit continued his aggressive approach and was finally dismissed for a brilliant 176 off 254 balls with 23 fours and 6 sixes. The Indian openers had added 317 runs for the opening wicket.

In the second innings also, Rohit again played aggressive against the South African bowlers and showed his class. He reached his fifty off 72 balls. After reaching his fifty, Rohit never looked back and scored a quick fire 127 off 149 balls with 10 fours and 7 sixes. He became the 6th Indian to score two centuries in an innings of the Test match. For his brilliance at the top, Rohit was awarded as the man of the match. After a disappointing West Indies Test series, Mayank Agarwal was playing his first Test match at home. He struggled little bit against the new ball. After going past the new ball, the explosive right-handed opener from Karnataka played with positive intent and reached his fifty off 114 balls. As Rohit Sharma was going great guns, Mayank showed his class to end day 1 on 84 not out.

On the 2nd day, Mayank Agarwal played with aggressive intent against the South African spinners and made the batting look easy on a good batting pitch. He continued to show his class and scored his maiden double century. He was finally dismissed for a brilliant 215 off 371 balls with 23 fours and 6 sixes. Rohit and Mayank added 317 runs for the opening wicket. In the second innings, Mayank was dismissed cheaply by Keshav Maharaj.

Mayank made his Test debut for India during the third Test match against Australia at Melbourne Cricket Ground, MCG in the 2018/19 tour of Australia. He would be looking to continue his impressive performance in the 2nd Test starting from 10th October at Pune. Ravichandran Ashwin 7 wickets for 146 in the first innings.

The best-off spinner Ravichandran Ashwin bowled brilliantly well in the first Test match against South Africa. Before the previous Test match, Ashwin played his last match against Australia at Adelaide Oval. He struggled with injuries off late and Virat Kohli sometimes ignored him in the playing XI.

After declaring their innings on 502 for 7, Ravichandran Ashwin provided the breakthrough for India dismissing Aiden Markram with a beauty of delivery. He then got wicket of Theunis de Bryun on the 2nd day.

As the partnership between Dean Elgar and Faf du Plessis was going on, Ashwin again made the breakthrough dismissing South African captain. He then dismissed the centurion de Kock, Vernon Philander on the 3rd day. At the start of 4th day, Ashwin got wickets of Keshav Maharaj and Kagiso Rabada to finish with figures of 7/146 in 46.2 overs. His spell helped India gain the lead of 71 runs.

In the second innings, Ashwin got the wicket of Theunis de Bryun cheaply. He finished with figures of 1/44 in 20 overs.

He will play a big role in the 2nd Test match at Pune and would love to continue his impressive performance. Ravindra Jadeja all-round performance with the bat and ball in the first Test.

Ravindra Jadeja proved his worth as an all-rounder in the first Test match against South Africa. In the first innings, Jadeja remained not out on 30 and helped India declare their innings on 502 for 7. With the ball, he was not impressive as took the wicket of Dean Elgar for 160. He finished with figures of 2 for 124 in 40 overs going at a run rate of 3.10 runs per over.

The all-rounder was promoted to number 4 in the second innings. He showed his worth by scoring 40 off 32 balls and helped India to score quick runs. It was an amazing bowling spell by Jadeja who took the wicket of centurion from the first innings Dean Elgar in the final stages of 4th day.

On the fifth day, he took wickets of Aiden Markram, Vernon Philander and Keshav Maharaj to derail the South Africa innings. He finished with figures of 4 for 87 in 25 overs. Due to his all-round performance, Jadeja has moved to number 2 spot in the ICC all-rounders rankings in Test matches.

He has improved his batting in recent times and would be looking to continue his all-round abilities to win the series at Pune. Mohammed Shami was another star in India’s win over South Africa during the first Test match at Vizag. He was not utilised properly in the first innings by Virat Kohli. Ravichandran Ashwin and Ravindra Jadeja did most of the bowling. Shami went wicket less giving away 47 runs in 18 overs.

Shami was at his best in the 2nd innings on the final day. He grabbed wickets of Temba Bavuma, Faf du Plessis, Quinton de Kock in quick succession to leave South Africa in big trouble. It was an amazing display of reverse swing bowling by Mohammed Shami who created havoc among South African batsmen.

He took the wicket of Dane Piedt and then Kagiso Rabada to help India register a 203-run win. Shami finished with figures of 5 for 35 in 10.5 overs. It was an all-round performance by India who clinched the first Test match. The expressive fast bowler would be looking to continue his impressive form in the 2nd Test and help Team India win the series.