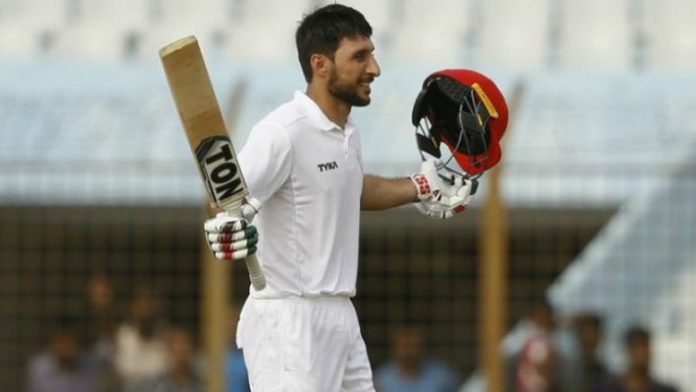 It was a great day for Afghanistan team as they ended the first day of one-off Test against Bangladesh in a strong position played at Zahur Chaudhary Stadium, Chattogram on Thursday. Rahmat Shah brilliant century, Asghar Afghan and Zazai brilliance ensured a superb day for the visitors.

Afghanistan newly appointed captain Rashid Khan won the toss and decided to bat first. It was a cautious start by Ibhraim Zadran and Ihsanullah who looked solid with their defensive approach. Taijul Islam got the breakthrough dismissing Ihsanullah for 93. Both openers added 19 runs for the opening wicket. Rahmat Shah came to the crease and played with positive intent. Ibrahim showed his potential with solid batting before playing a poor stroke. Taijul Islam got his 2nd wicket to dismiss Ibhraim Zadran for 21. Rahmat and Zadran added 29 runs for the 2nd wicket.

Rahmat Shah and Hashmatullah Shahidi hit the bad balls away for boundaries. At the stroke of lunch break, Mahmudullah got the wicket of Shahidi for 14. Afghanistan went into the lunch break at 77 for 3.

Soon after the tea break, Rahmat Shah became the first Afghanistan batsman to score a century in Test cricket off 186 balls. Nayeem Islam dismissed Shah off the next ball. Asghar Afghan and Rahmat Shah added 120 runs for the 4th wicket. In the same over, Islam got the wicket of Mohammad Nabi to put Afghanistan under pressure at 197 for 5.

Asghar Afghan reached his fifty 96 balls. Zazai and Afghan steadied the innings with aggressive stroke play. Bangladesh took the new ball after 80 overs but could not make a breakthrough. Afghanistan ended the 1st day on 271 for 5 with Asghar Afghan on 88 and Zazai on 35. Zazai and Asghar have added so far 74 runs for the 6th wicket. Taijul Islam and Nayeem Islam took 2 wickets each for Bangladesh.