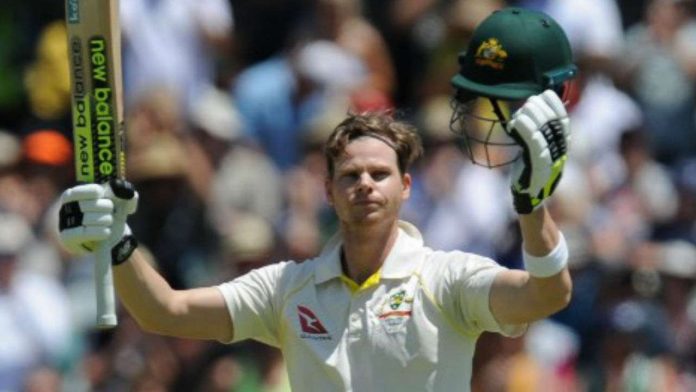 Thanks to a majestic 211 runs from Steve Smith, Australia have ended the 2nd day in a strong position of the 4th Test played at Old Trafford, Manchester on Thursday.
Starting on the overnight score of 170 for 3, Stuart Broad got the early wicket dismissing Travis Head with a beauty of a ball. England missed the chance of getting the wicket of Steve Smith as Jofra Archer dropped a return catch.

Rain again arrived at the score of 214 for 4. Wade tried to hit a big shot and was dismissed by Jack Leach for 16. Smith reached his century off 160 balls. Australia went into lunch at a score of 245 for 5.

After the lunch break, Steve Smith got a reprieve as Jack Leach overstepped. Smith took the advantage of the chance and continued to pile on the misery on England bowlers. Australian captain Tim Paine also was dropped by England players. Smith continued to take on England bowlers and reached his 150 off 237 balls. On the other hand, Paine also completed his fifty off 113 balls. Australia went into the tea break in a strong position at 369 for 5.

Craig Overton got the breakthrough off the 1st ball after the tea break dismissing Tim Paine. Paine and Smith added 145 runs for the 6th wicket. Jack Leach dismissed Pat Cummins cheaply. Mitchell Starc joined in the party with some quick-fire runs. Smith, on the other hand, reached his double century off 310 balls. He was eventually got out for a brilliant 211. Mitchell Starc and Nathan Lyon enjoyed their batting to add unbeaten 59 runs for the 9th wicket. Mitchell reached his fifty off 49 balls. Australia declared their innings on 497 for 8.

Australia got an early wicket as Pat Cummins dismissed Joe Denly with a brilliant catch by Matthew Wade. Craig Overton looked solid and took England to 23 for 1 at the end of day 2.