Pakistan Cricket Board named Babar Azam as their new ODI captain on Tuesday, replacing Sarfaraz Ahmed. The board had already Sarfaraz off T20 and Test captaincy last year. Babar Azam will be seen handling the T20 and the ODIs while Azhar Ali will lead the side in Tests.

Announcing the annual contracts list, the Chief selector and Head Coach Misbah-ul-Haq  congratulated Azhar Ali and Babar Azam for getting extensions. He also expressed his belief and confidence over the decision. Both Pakistani fans and experts have welcomed the split in captaincy. Many believe that Babar will blossom under Ali as a Test cricketer. Being around Pakistan’s domestic as well as international Test circuit for long, Ali has shown a great promise in recent past. It will be interseting to see if he is manages to do both, shoulder responsibilities and overcome his personal dip of form at the same time. 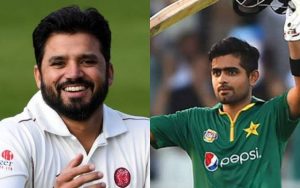 Babar Azam though, has taken massive strides in international cricket in the last couple of years. He has been highly rated by the legends of the game and is often seen in comparisons with the world famous Fab 4 of Kohli, Williamson, Smith and Root. Especially in the limited-overs format, he has emerged to be Pakistan go-to-man in most situations. He has gone on to beat multiple records for Pakistan cricket and has been immovable across formats ever since arrival. Playing with a steady head and a composed mind, Azam has a naturally sound technique and enjoys hitting crisply through the gaps. His ability to access the situation and absorb pressure is impeccable and perhaps, has paved his way to a well-deserved captaincy even at a young age.

PCB dropped the likes of Sarfaraz Khan, Wahab Riaz, Mohammad Aamir and Fakhar Zaman from its list of central contracts. It tried giving the team a new look by signing players like Naseem Shah, Abid Ali and Mohammad Hasnain. The recent emergence of these young and talented pacers from the country has made the world take notice. Therefore this refurbished Pakistan, under Azam and Ali, promises to come out of its transitioning phase soon. Other than the two multinational tournaments, Pakistan’s schedule includes nine Tests, six ODIs and 20 T20s this season. But given the COVID19 pandemic, it wouldn’t be a surprise to see the number reduce drastically.