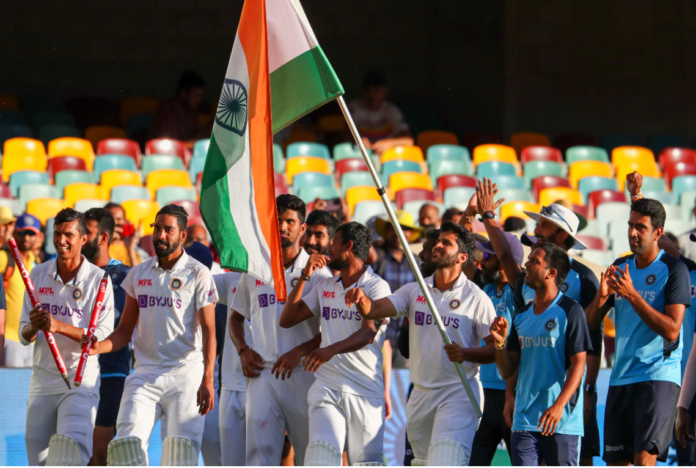 Rishabh Pant drives one past the bowler to win the Test match. As trivial as it may sound, the win has unprecedented importance in itself. ‘The Gabbatoir’, ‘The Fortress Gabba’ was finally breached. Australia’s 33-year unbeaten record was finally broken. But more importantly, the Indian team found a renewed identity with that straight drive. Down and out in the First Test at Adelaide, and with consistently losing one player after the other to injuries, to come back and win in this fashion was exemplary to the character, the mettle, and the undying spirit that Indian cricket is made up of.

As our dear Harsha Bhogle would put it, “I want to be a fly on the walls of the Indian dressing room,” only to experience the atmosphere and the vibe around. Through the thick and thin, this Indian set-up has scaled multiple highs in the past decade and needless to say, this one is the best of them all. Perhaps, even the best performance India’s ever produced overseas in their 88-year history. To witness the kind of dedication, intent, and never-say-die attitude that Indian players had on and off the field was surreal. The series will go down as a template defining Test cricket for generations to come. “Bruised and Beaten but never Broken.” India showed serious character to construct a turnaround like never before.

The departure of Virat Kohli was in itself the biggest loss for the Indian team to digest. But to be further forced with replacements due to injuries made it even tougher. As many as 8 Indian players were injured replenishing all the available resources. The SOS replacements in form of net bowlers were then inducted to the side for the fifth Test and my word, did they deliver! Right from the word go, be it Gill, Siraj, Sundar, or Shardul, the kind of cricket they put on display almost gave an impression of long, untouched belongingness. The emergence of Siraj as a leader even with an experience of a couple of Test matches was pleasing to see. Each and every bowler of the attack, that together had only 11 Test matches before the Gabba Test, was keen on making a mark. And not only did they manage to take all 20 wickets, but made sure that they didn’t leak many runs and bowled to a well-thought and well-executed plan.

“Never ever, ever underestimate the Indians, 1.5 billion [people in India] and you play in the senior team, you have to be really tough.” When was the last time you heard an Aussie, as aggressive and as fierce as Justin Langer, talk about a visiting team in that high regard? Especially after being all-out for 36 at Adelaide, India was written off with ease, some even predicting a 4-0 whitewash. However, the upliftment of the team, spearheaded by stand-in skipper Ajinkya Rahane, Ravi Shastri, and the entire support staff instilled back the belief and confidence within the team. The captain also led from the front in the Melbourne Boxing Day Test and courtesy of a solid performance from the senior players, completed one of India’s most clinical wins. The team also managed to rally through to a draw playing out an entire Day at Sydney in the subsequent New Year’s Test at Sydney. It was baffling to see that at every point of time where the Indian team found themselves in trouble, they found a new hero from those available.

EVERY SESSION WE DISCOVERED A NEW HERO.
Every time we got hit, we stayed put & stood taller. We pushed boundaries of belief to play fearless but not careless cricket. Injuries & uncertainties were countered with poise & confidence. One of the greatest series wins!
Congrats India. pic.twitter.com/ZtCChUURLV

Rahane with the bat on Day 3 of the Melbourne Test, Bumrah with the ball in the second innings, Ashwin being fairly consistent with wickets throughout the series, Jadeja with an all-round performance, Pujara with his unimaginable grit and patience, Vihari with his pain-conquering defenses at Sydney, Pant with his unconventional hitting and the debutants in Siraj and Gill playing their part as well, if any of India’s performances at Melbourne and Sydney were an indication, the win at Brisbane does not come in as a surprise.

For subcontinental teams, Australia, with its hard pitches, big grounds, tall and muscular fast bowlers, hostile crowds, and the aura of intimidation in the air, is the hardest land. And nothing motivates and invigorate Australian confidence as much as Gabba does; where Australia never lost a Test match since 1988. The stat was even reminded to by the Aussie media and the players when India was reluctant to travel to Brisbane due to the stricter lockdown. To add on, losing the toss for the consecutive third time could have potentially proven decisive.

Woven in a little bunch of 20-25 days, a fitting win at the Gabba was only apt given the number of fairytales the series had hosted. “We were here to win the series, but we have just been outplayed by a disciplined and tough Indian side who fully deserve the series win. Have to look back over a lot of things, and we’ll go through it as a group. We have been outplayed by a better side this series,” said a distraught Tim Paine in the post-match presentation.

And he had all the more reasons to do so. On the fifth day of the Gabba Test, with 324 runs to win, India was never expected to even come close to the target, let alone winning. India even lost the wicket of Rohit Sharma early to make things even worse. The spectacle showcase later though was one of the greatest learnings to take from Test cricket. Every individual approaches every situation differently and in the end, the one with a better belief and better ability prevails. Pujara’s sound defense, which also consisted of many mighty blows to the body looked impossible to be breached. Meanwhile, young Shubhman Gill seemed at ease playing his shots on the front-foot and the back, to the spinners as well as the pacers. A few of his pull-shots off the pacers and cover-drives of Nathon Lyon reminded one of Sehwag calmly going about his mundane.

Sunil Gavaskar about Pujara : “See, whatever I say about him will be very, very less. He put his body on the line for Indian cricket, for the Indian cricket team. He took blows on gloves, body, helmet but he didn’t deter. His presence at the other end also gives confidence to young stroke players that there is someone holding the other end.”

The rock of Pujara remained immovable and unscathed through most of the Indian innings. On one end, where he reached his slowest ever Test match half-century, the young-blood of Rishabh Pant seemed to take off from where he left at Sydney. This time with a sole motive to complete the unfinished business, Pant began to play his shots, albeit watchfully. The difficult phases, the Australian body-line bowling as well as the periodic spin threat was all well-negotiated but India managed to keep themselves in the hunt throughout.

Tim Paine in the post-match said: “They (India) allowed us to poke holes in their heads, their chests, but also kept soldering them on”

After Pujra’s dismissal, Pant let himself free and was supported ably by the hero from the first innings Washington Sundar. A pull-shot for six off Cummins in the second innings, much identical in flair to the sweep off Lyon in the first, were perhaps the two moments that defined Sundar with the bat. His dismissal to Lyon was followed by his partner-in-crime from the first innings, Thakur’s dismissal to Hazlewood. Both Sundar and Thakur with the bat in the first innings were the only reason why India could survive through till Day 5 in the first place but was an irony to not have them at the crease to celebrate the winning moment. Having said, it took Rishabh Pant only one ball post-Thakur’s dismissal to drive past the bowler securing a well-compiled series win.

This is young India at work. Give them a stage and move out. Our generation thinks: don't lose. This one inhabits a different world. They see victory, opportunity.

There were also a few moments that talked about the team spirit within the Indian team. It would be unfair to not credit the missing Virat Kohli for the kind of camaraderie, culture, and values he’s imparted to the team over the last 5 years. Ones quite evidently on the field but importantly, also off it. Sundar being welcomed by Ashwin after his tremendous innings with the bat, Bumrah welcoming Siraj with a bear-hug after his 5-wicket haul, or even Ajinkya Rahane presenting a signed jersey to the milestone-man Nathon Lyon post-match helped a sneak-peak into the emotional side of the Indian team.

Effectively, India played with one paternity leave, a couple of hamstrings, one forehand fracture, a dislocated thumb, an injured wrist, a side-strain, a sore back, a stretched abdomen, a torn calf, and a pulled groin. They even encountered some unfortunate racial abuse for that matter. All it took though, was the intent, the belief, and the never-say-die attitude to win yet another series down under. Yes, there were, are, and will always be things to scrutinize upon, but the 2020-21 Tour win right here is arguably India’s best overseas win ever.