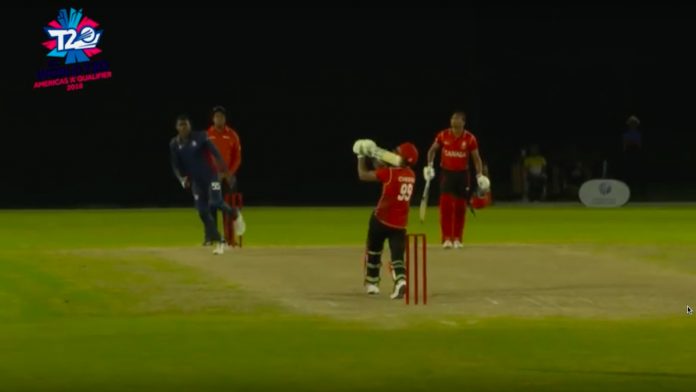 Cheema hit Elmore Hutchinson for a six over mid-wicket off the last ball of Canada’s regulation 20 overs to set a landmark in the 174-year-old cricketing history between the 2 countries. In cricket, we don’t allow for the spoils to be shared – the ‘Super Over’ was upon us, and so was more drama.

The stark difference between the two sides was the way they read the pitch and the conditions, in addition to USA’s untidy fielding. Canada trusted their slow bowlers on a wicket that was slow and spun a web around the USA batsmen to restrict them to a meagre 140 total. USA on the other hand underused their slow bowlers and shockingly took off Steven Taylor after his 2-wicket 12th over. Had he bowled the 14th over, other bowling combinations would have fallen in place and Khaleel would have an option to bowl his best death bowler, Ali Khan, in the 20th over instead of Hutchinson, who is not well known for his death bowling abilities to say the least.

Ali Khan – who made the world his own stage at the CPL 2018, was handed the responsibility to bowl, what is probably the toughest over in the game at this level. It wasn’t his night as Navneet Dhaliwal smacked him for a six and a boundary off the first 2 balls to get Canada off to a flier. Ali’s intent was good as he tried for the wide yorkers, however the execution was a little too wide giving Dhaliwal enough width to free his arms and take him to the cleaners. Ali made a good comeback, to give only 6 runs off the next 4 balls as he got his yorkers on target, amidst some sloppy fielding from USA.

Chasing 17 runs in the Super Over, USA batsmen had clear focus as Jaskaran Malhotra hammered the 2nd ball for a huge six over square-leg. Cecil Pervez held his nerve and got Canada back in the game with a dot ball and a single off the 3rd and 4th balls. With 7 needed off the last ball, Pervez missed his yorker to offer a juicy full toss, Taylor went hard over point, but this was Cheema’s night and USA fell 3 runs short.

The day began with Ibrahim Khaleel winning the toss and opting to bat first. USA started steady with Malhotra looking in ominous touch but ran out of his partner in the 3rd over – Monank Patel, centurion from the other day nicking a Pervez delivery to a good low catch by Tariq behind the wickets. Taylor and Malhotra scored briskly to build a good partnership as they took USA to 52 for 1 at the end of the Powerplay. Then came the moment of the match, when Canadian captain Nitish Kumar brought himself on and scalped 2 in one over to send back both the set batsmen. It was all catch up for USA then as they could not build any substantial partnerships and the hosts found the lack of pace tough to conquer with Canadian spinners tightening the grip on the game.

Chasing a target of 141, courtesy couple of maximums by Saurabh Netravalkar in the last over, Canada got off to a poor start as they lost opener Wijeratne to a disciplined Saurabh who had a great outing on the day. But the real highlight was how Navneet Dhaliwal took apart Ali Khan as Canada amassed 24 runs off the 3rd over of the game and then steadied the ship. However, as they say “cricket is a funny game”; Canada slipped from 69 for 2 to 74 for 6 in a span of 10 balls and USA were right back in it. It was USA’s game to wrap up then – but for the nerveless batting by Rizwan Cheema who was ably supported by the ‘young veteran’ Nikhil Dutta as Canada took it deep and ended on the right side of things.

Seldom has the fickleness of Twenty20 been more evident.  In the end though, those wickets in the middle overs by captain Nitish Kumar made all the difference to a game that was a great advertisement for cricket’s most exciting format.

Canada celebrated to the fullest, but when preparing the ground for the next match, the groundsmen would have to deal with pieces of broken US hearts.