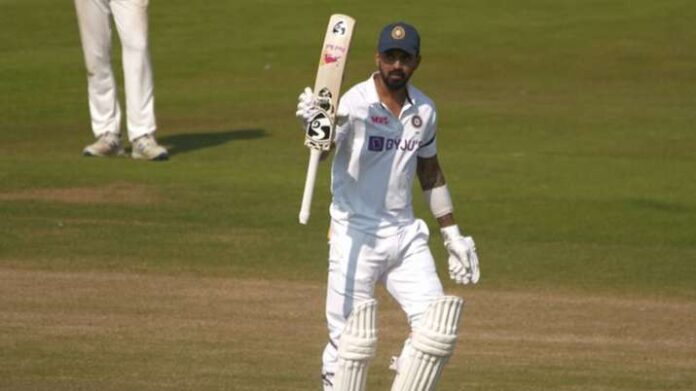 The Indian cricket team is currently in Durham playing a 3-day practice game against the County XI. With a few answers to be found in regards to India’s team combination next month, the two scheduled practice games are set to have a lot of importance. Moreover, the injury to Shubhman Gill and Mayank Agarwal’s loss of form of late could well prove a potential chance for the likes of KL Rahul in the England series.

The last time KL Rahul played against England, in the 5th Test of 2018, he top-scored for India with 149 opening the batting. His inning of 101 in the ongoing practice game has added weight to his bid to partner Rohit Sharma. KL has also looked the most comfortable against the swinging Duke ball, cautiously leaving the balls out of the stumps. His timing and temperament as well have been pretty much on point throughout. He was India’s only mainstay in the team void of Test veterans – Virat Kohli and Ajinkya Rahane. Supported ably by Ravindra Jadeja in the middle, KL Rahul propelled India to beyond 300 in the first innings at Durham.

The return of KL Rahul back into the form will please the selectors as the multi-dimensional player also adds a wicket-keeping option in case the likes of Rishabh Pant and Wriddhiman Saha aren’t fit for the First Test given their Covid19 and isolation worries. What his inclusion in the team could also do is help India play an extra batter in Hanuma Vihari in the lower order alongside Jadeja as well as Ashwin.

While one still awaits the nature of the pitch and the overhead conditions forecast, India’s prime concern would be to get the team balance right. If they are to play with the only spinner with the addition of a Shardul Thakur at 8, KL Rahul at the top order could well be the right choice. Not to forget, Rahul is also a terrific slip fielder, the last Indian tour being a testament to the same.

As far as the bowlers are concerned, Umesh Yadav was the pick of the bowlers in the first practice game against the County Select XI with three wickets. Mohd. Siraj was the other bowler to have impressed one and all with his discipline and consistency. In all likelihood, it would be a toss-up between the two bowlers to claim India’s third fast bowler slot.

England announces their 17-man squad for the Test series:

England Cricket Board meanwhile, announced the 17-man squad for the First 2 Tests of the series. The announcement marked a return of the Jos Buttler and Ben Stokes to the English side after injury had forced them out early on. Haseeb Hameed, riding on his brilliant domestic and first-class performance made it to the squad as well as a backup opener.

Jofra Archer, the English pacer recovering from elbow surgery, however, has been rested with the T20 World Cup in mind and is unlikely to be available throughout the summer. Ben Foakes, who is also injured on the other hand made way for Jonny Bairstow for the reserved wicket-keeper slot.