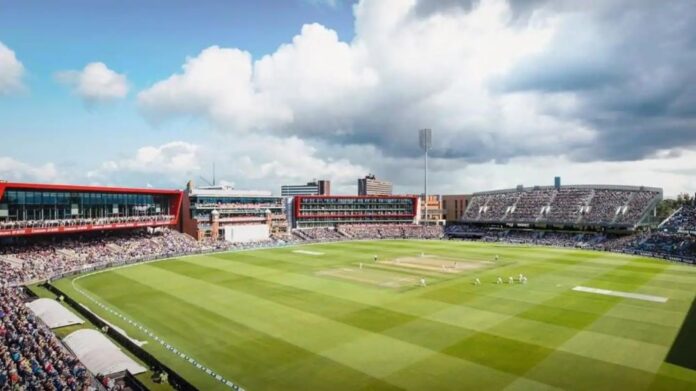 In light of the increasing pandemic in India, the Indian Premier League (IPL) was suspended this week. The emergence of multiple cases across both the IPL bio-bubbles led the BCCI to postpone the IPL for the time being. While Sourav Ganguly confirmed that India will look to contact other cricket boards for a possible window in September to complete the games, the future of this season is still uncertain. However, India’s had help pouring in from all across the globe post the postponement. A group of England counties as well have reportedly offered to host the remainder of the IPL 2021 season in September this year.

The MCC, Surrey, and Warwickshire, who are based at Lord’s, The Kia Oval (both London), and Edgbaston (Birmingham), respectively are said to be a part of the group that has reached out to ECB to approach the BCCI. Their plan suggests that the pending half of the IPL could be completed in around a couple of weeks in September, post India’s Tour of England.

Old Trafford in Manchester, Lancashire’s home ground, and one of the prime cricket locations in the pandemic can also be included in the venues if the offer comes through. The subject was likely to come up at the virtual ICC meeting of the national chief executives scheduled for Thursday.

The proposal will not only help India expand the IPL market in the UK but will also help the UAE pitches fresh for the T20 World Cup, also likely to be shifted out of the subcontinent. Moreover, it will be an enriching experience for everyone to play in English conditions and possibly even in front of LIVE spectators, given the improvement in the UK. However, the ECB has not had any official statement over the same. They said: “We speak to the BCCI regularly about tours and other matters and we’ll continue doing so, but we have received no indication that they are looking for alternative hosts for the IPL at the moment.”

The number of obstacles in the course for the plan to be executed cannot be neglected either. With the pandemic taking an unpredictable route throughout the last year and a half, one will also need to have on the quarantine rules and the travel management in and out of the United Kingdom. Scheduling will also be problematic and will play a key role in deciding the distribution of matches. Though the English counties have shown readiness to play two (or even possibly three) games in a day, the BCCI would be reluctant to go ahead with the plan. The number of international commitments during the said window, not only for India but for teams around the globe will also be a hurdle for BCCI to overcome.

Having said that, the kind gesture from the English counties deserves praise and admiration and as cricket fans we would only want the Indian Premier League (IPL) to resume and be completed in a safe and sound environment.