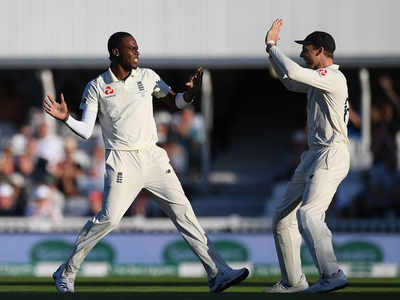 England is in a strong position with a lead of 79 runs on the 2nd day of the 5th Test match played at Kennington Oval, London on Friday. Despite Smith brilliance, it was a brilliant performance by England bowlers who did not allow Australia to score runs with ease.

Starting on the overnight score of 271 for 8,  Jos Buttler played a great knock and was dismissed by Pat Cummins for 70. In the next over Mitchell Marsh picked his maiden 5 wicket haul in Test matches getting the wicket of Jack Leach. England added 23 runs and was bowled out for 294.

It was a perfect start for the England team as Jofra Archer got the wicket of David Warner cheaply with a review. Archer got another opener, Marcus Harris, to put Australia under pressure at 14 for 2. Marnus Labuschagne and Steve Smith steadied the innings with aggressive stroke play. Australia went into lunch break at 55 for 2.

After the lunch break, Smith and Labuschagne continued to play with positive intent. Archer broke the partnership getting the wicket of Labuschagne for 48. Both these two Australian batsmen added 69 runs for the 3rd wicket. Smith continued to pile on runs for Australia and made the batting look easy. Wade struggled against the England bowling line up. Sam Curran dismissed Wade cheaply for 193. Wade and Smith added 35 runs for the 4th wicket. Smith, on the other hand, reached his 50 off 91 balls. Australia went into tea break at 147 for 4.

The England bowlers just showed their class with top quality bowling from Jofra Archer, Sam Curran, and Chris Woakes. Archer got the wicket of Mitchell Marsh. Sam Curran was brilliant with the ball taking wickets of Tim Paine and Pat Cummins in successive balls which put Australia under immense pressure. Steve Smith was given chances but played with positive intent. Chris Woakes dismissed Smith for 80. Nathan Lyon and Peter Siddle counter-attacked to add 39 runs for the 9th wicket. Jofra Archer took wickets of Lyon and Peter Siddle of successive balls. England bowled out Australia for 225 with a lead of 69 runs.

England ended the 2nd day at 9 for 0. Pat Cummins and Josh Hazlewood put the openers under Test but Burns and Denly survived.