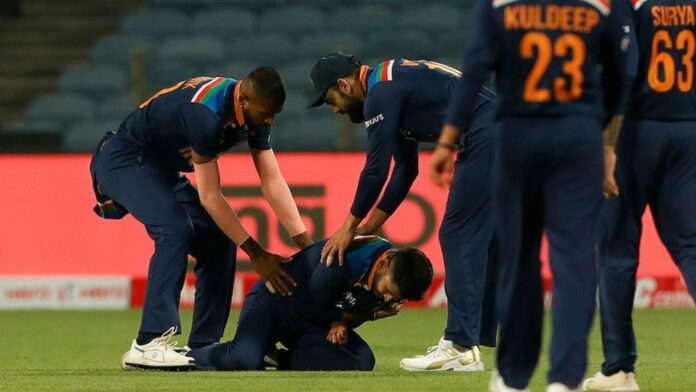 The 2021 edition of the Indian Premier League is set to get underway from April 9th under home conditions. Largely seen as a preparation tournament for the 2021 T20 World Cup by teams from all around the world, IPL’s return to the country this year is a welcome one. Though the majority of the tournament is still likely to be played behind closed doors, cricket fans from the country are guaranteed a heck of a contest. Players from around the globe, from the best of T20 teams, are likely to land in India by the first week of April. However, this season of the Indian Premier League (IPL) will also miss out on a few key players. Here’s a look at 4 players who are confirmed to be unavailable for the tournament.

The Delhi Capitals skipper was injured in the first ODI while diving to stop the ball. Dislocating his shoulder, Shreyas seemed to be in excruciating pain. His reactions were only an indication of the seriousness of his injury and it was soon after that Delhi Capitals officially declared that Iyer will no longer take part in the IPL 2021. The youngster, who made a mark as a captain in the last few years, was replaced by Rishabh Pant last week. Iyer himself took it to press, stating that it was he who suggested Pant as his replacement, given the stupendous form that the left-hander is in. Meanwhile, though Iyer will also be replaced in the batting department, his absence on the cricket field is sure to be felt.

“When I sustained the shoulder injury, and Delhi Capitals needed a leader for this edition of the IPL, I had no doubt that Rishabh would be the best man for the job. He has all my good wishes to make amazing things happen with our absolutely incredible team. I’m going to miss the team tremendously, and will be cheering for them throughout,” Iyer has said in a release from DC.

Shreyas has taken DC to newer heights ever since he took on the role of captain, leading the team to its very first final last year. The franchise will always be there for any assistance and support he may require at any step.#YehHaiNayiDilli pic.twitter.com/0GoDKIQKqp

Australian pacer and the Chennai Super Kings recruit Josh Hazlewood also made himself unavailable just a few days before the tournament. While his late call was also criticized and questioned by many, Hazlewood explained that it was the expectations of the bio-bubble and the prolonged Australian domestic season that prompted him for the decision. Though Hazlewood’s replacement for the season isn’t known yet, it is said that his teammate Alex Carey is in pipeline for a CSK call-up. In either case, Hazlewood’s absence is unlikely to affect CSK’s preferred XI combination. The Australian pacer played only 3 games in the UAE edition last year picking up only 1 wicket.

Completely understand players being uncertain, even sceptical, of more days in a bubble. But to pull out so close to the #IPL, when you could have done it earlier, makes it hard on teams that have made plans around these players. If I was a team owner, I would be disappointed.

The Australian young wicket-keeper had a fairytale ride through the KFC Big Bash to the IPL last year, and then into the Australian national T20I team. Though the youngster did not fit into RCB’s squad balance last year and featured only in limited games, he was retained ahead of the IPL 2021 auction. However, soon after, he announced his unavailability for the tournament citing personal reasons. It is believed that Phillipe decided against joining IPL 2021 in order to be a part of Australia’s domestic circuit, helping his team, New South Wales to a Sheffield Shield as well as a Marsh Cup title.

Phillipe has been replaced by New Zealand’s latest sensation Finn Allen. The top-scorer from the Super Smash competition was approached by RCB director Mike Hesson to which he explains to be a “dream come true” moment.

Allen said in a chat with ESPNCricInfo:

“For me, there are no expectations. It has kind of always been that way for me – I’m just going out there and enjoying what I am doing. Just trying to win the title for Wellington, and if more than that comes out of it, it would be awesome. Obviously going to the IPL would be pretty amazing – that’s almost my dream for a long time now, so yeah hopefully get lucky and get picked up. But, obviously no expectations, and if it doesn’t happen, there’s always the future.”

Another Australian to pull out of the IPL 2021 edition at the very last moment is the all-rounder Mitchell Marsh. Marsh had missed the UAE edition of the tournament as well after injuring himself in the very first game for the Sunrisers Hyderabad. He was then replaced by West Indian Jason Holder for the rest of the season.

However this year, citing personal reasons, Marsh hinted that the hectic Australian domestic schedule had taken a toll and that a prolonged bio-bubble was not his preferred choice at the moment. Sunrisers team also confirmed the same but were quick to name his replacement in the Englishman Jason Roy. With Warner, Bairstow, and Williamson already a part of the team, it will be interesting whether Roy starts for Hyderabad.

Due to personal reasons, Mitchell Marsh will be opting out of #IPL2021.