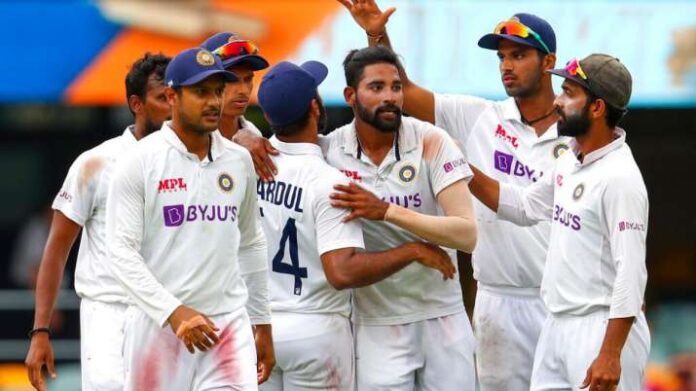 A lot was talked about Australia’s defensive tactics, made to look so courtesy of the rains pelting down on Day 4 of the Brisbane Test against India. India ended the day at 4/0 chasing a target of 328 on an uneven fifth-day Gabba wicket.

Who would have thought at the start of the series, after the disastrous Adelaide Test that India would come back with such a miracle? Going into the Day 5, morning session, India will begin pursuit of the 328-run target while Australia will bowl to cash their last chance to win the series. Though the Australian bowling attack walks in as favorites, one can never under-estimate the strength of Indian batting, especially after the previous two Test matches. India, in their day-ending conference, have already mentioned their intent to win and with Gill and Sharma at the crease, are expected to begin with aggression and control. The approach of the mainstays, Rahane, and Pujara to follow, will then depend on the opening stand, dictating the direction of the game.

Throughout the entire series, India has come up with one stellar performance after the other. Ridden by so many injuries, Indian youngsters have fought back valiantly to prove a point, more so to also prove the character of the Indian Test team. The emergence of Siraj and Gill all along, T Natarajan’s discipline with the ball, and the impressive all-round display from Sundar and Thakur this match has been one of the most pleasing things to watch. Siraj in fact has transformed from a debutant to a leader due course of this Test series. The responsibilities taken by the senior players, right from Pujara and Rahane with the bat to Bumrah, Ashwin, and Jadeja with the ball have been commendable. In-fact the two spinners have also gone on to save India a Test match each before being left out for the last Test.

It is certain to be one of the best finishes to a series, well-deserved of a photographic end. However, the weather forecast for the day isn’t the most ideal. With rain expected to play hide and seek throughout, the teams might not be able to complete the allotted 98 overs. Even on Day 4, they fell 23 overs short of the target. The importance of a win for Australia is more than that for India given that they are ought to win the Test match to regain the Border-Gavaskar Trophy 2020-21 as well as to stay alive in the ICC World Test Championship.

At Brisbane, originally known to be an Australian fortress – ‘Gabbatoir’, the wicket has already begun to play a cruel game. The uneven bounce witnessed through the Australian second innings and the widening of cracks with time will also be a thing to look out for. The late declaration from Aussie-captain, Tim Paine on Day 4 has also raised diverse opinion. While a few like Shane Warne, Glenn McGrath, etc. believe that Australia should have put India to bat much earlier, a few others feel that Paine did the right thing ensuring minimal chances of a loss. The experiences and the riches of Australian bowling will run onto the young, impulsive, and a renewed structure of Indian batting. With a draw, either outright wins and a tie, all possible, the exciting end to the Brisbane Test, as also the series, remains to be seen. All of it, if the rain gods are to be lenient and helpful.