The Indian Cricket Team will take on Bangladesh in the historic pink ball Test match to be played at Eden Gardens, Kolkata starting from 22nd November 2019. This will be the first time that both countries would feature in Day night Test matches.

It will be an historic occasion for all the Indian players and fans to see the Indian play their maiden day night Test match in full jam-packed stadium at the iconic venue.

In order to revive Test cricket, the first day night Test match was played between Australia and New Zealand from 27th November 2015 at Adelaide Oval. Since then there have been 11 matches that have taken place. Every country has played the day night Test cricket.

Here we look at the history of Pink ball Test matches 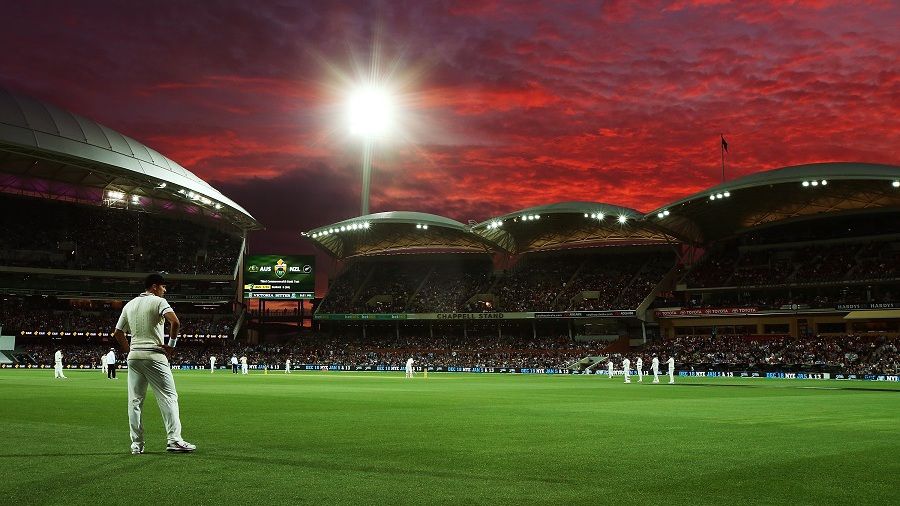 The first ever day night Test match was played between Australia and New Zealand at Adelaide Oval from 27th November 2015. New Zealand captain Brendon McCullum won the toss and decided to bat first. The Australian bowlers utilised the conditions and bowled out the visitors for 202. Tom Latham was the top scorer with 50. Mitchell Starc, Josh Hazlewood took 3 wickets each, while Peter Siddle and Nathan Lyon picked 2 wickets each. Australia ended the first day on 54 for 2.

The 2nd day saw the New Zealand coming back brilliantly reducing Australia to 116 for 8. Peter Nevil and Nathan Lyon added 74 runs for the 9th wicket. Smith scored 53 runs while Nevil was the top scorer for Australia with 66 runs. Doug Bracewell took 3 for 18 while Trent Boult, Mark Craig took 2 wickets each. Australia scored 224 in the first innings. Australia took a slender lead of 22 runs.

At the end of day 2, New Zealand were 116 for 5. Josh Hazlewood broke the backbone of New Zealand batting line up taking 6 for 70. Australia bowled out New Zealand for 208. With a target of 187 runs to win, a good batting display helped the hosts win the match by 3 wickets. Shaun Marsh was the top scorer with 48. Josh Hazlewood was the named man of the series. 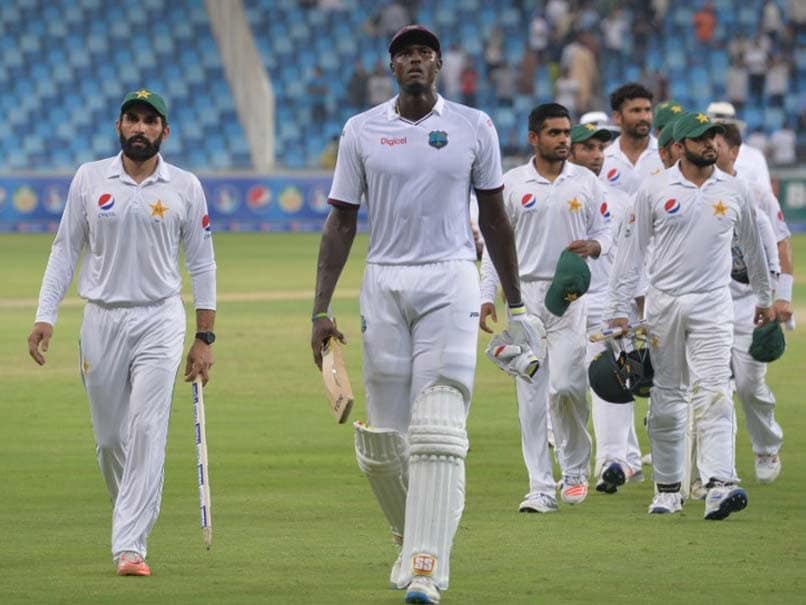 On the 2nd day, Azhar Ali smashed the West Indies bowlers and remained not out on 302. Babar Azam 69 and Asad Shafiq 67 contributed to Pakistan total of 579 for 3 declare. In reply, West Indies ended day 2 on 69 for 1.

A superb batting performance by Marlon Samuels, Darren Bravo, Blackwood helped West Indies reach 315 for 6. On the fourth day, West Indies were bowled out for 357. Yasir Shah took 5 for 121 in the 1st innings.

It was an amazing bowling performance by Devandra Bishoo who took 8 for 49 to bowl out Pakistan for 123. Chasing the target of 346 runs to win, West Indies ended day 4 on 95 for 2.

Despite a brilliant 116 runs by Darren Bravo, Roston Chase 35 and Jason Holder 40* was not enough as Pakistan won the match by 56 runs. Azhar Ali was named the man of the match for his marathon innings. Australia played its 2nd Day night Test match against South Africa from 24th November 2016 at Adelaide Oval. South Africa captain Faf du Plessis won the toss and decided to bat first. A superb captain knocks by Faf du Plessis with 118 not out and Simon Cook 40 helped South Africa declare their innings on 259 for 9. Australia ended the first day on 14 for 0.

Needing 127 runs to win in the 2nd innings, Warner and Renshaw added 64 runs for the opening which helped Australia win match by 7 wickets. Usman Khawaja was awarded man of the match for his 145. 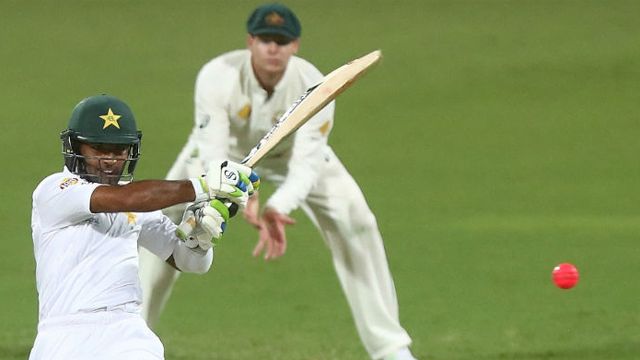 On the 2nd day, Smith and Handscomb scored centuries, Lyon quickfire 29 helped Australia 429 runs in the 1st innings. Mohammad Aamir and Wahab Riaz took 4 wickets each. In reply, Pakistan were struggling big time at 97 for 8 at the end of day 2.

Sarfaraz Ahmed remained not out on 59 as Pakistan were bowled out for 142 in 55 overs. Hazlewood, Starc and Bird took 3 wickets each. In their second innings, thanks to Usman Khawaja 74, Smith 63 and Handscomb 35 not out helped Australia declared their innings on 202 for 5.

On the fifth and final day, Shafiq tried his best to put the magic but was finally dismissed for a sensational 137. Australia won the match by 39 runs as they bowled out Pakistan for 450 which was a remarkable effort by the visitors. 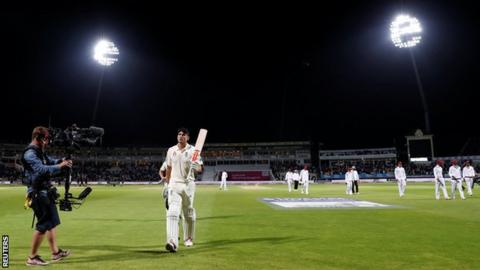 The first day night Test match on England soil was played between England and West Indies from 17th August at Edgbaston Cricket Ground, Birmingham. The hosts proved too much for the visitors as they won the match by an innings and 209 runs.

In that match, England captain Joe Root won the toss and decided to bat first. Despite a shaky start losing 2 early wickets, Sir Alistair Cook and Joe Root steadied the innings for the hosts as they ended day 1 on a commanding 348 for 3.

On the 2nd day, Cook continued to march on and scored a marathon 243. Dawid Malan also scored 65 runs to help England post a massive total of 514 for 8 declare. In reply, West Indies ended day 2 on 44 for 1. Roston Chase was pick of bowlers with 4 for 113.

The third day saw England bowlers creating a big impact dismissing West Indies for 168 runs in the first innings. Jeremie Blackwood remained not out on 79. For England, James Anderson took 3 for 34, Stuart Broad and Toby Roland Jones took 2 wickets each.

Deciding to enforce the follow on, England bowlers did the job again and bowled out West Indies for 137. Kraigg Braithwaite was the top scorer for West Indies in 2nd innings with 40. Stuart Broad took 3 for 34, while Moeen Ali, Jones and James Anderson took 2 wickets each. Ben Stokes also picked 1 wicket in 2nd innings.

Sir Alistair Cook was the named the man of the match for his marathon knock. 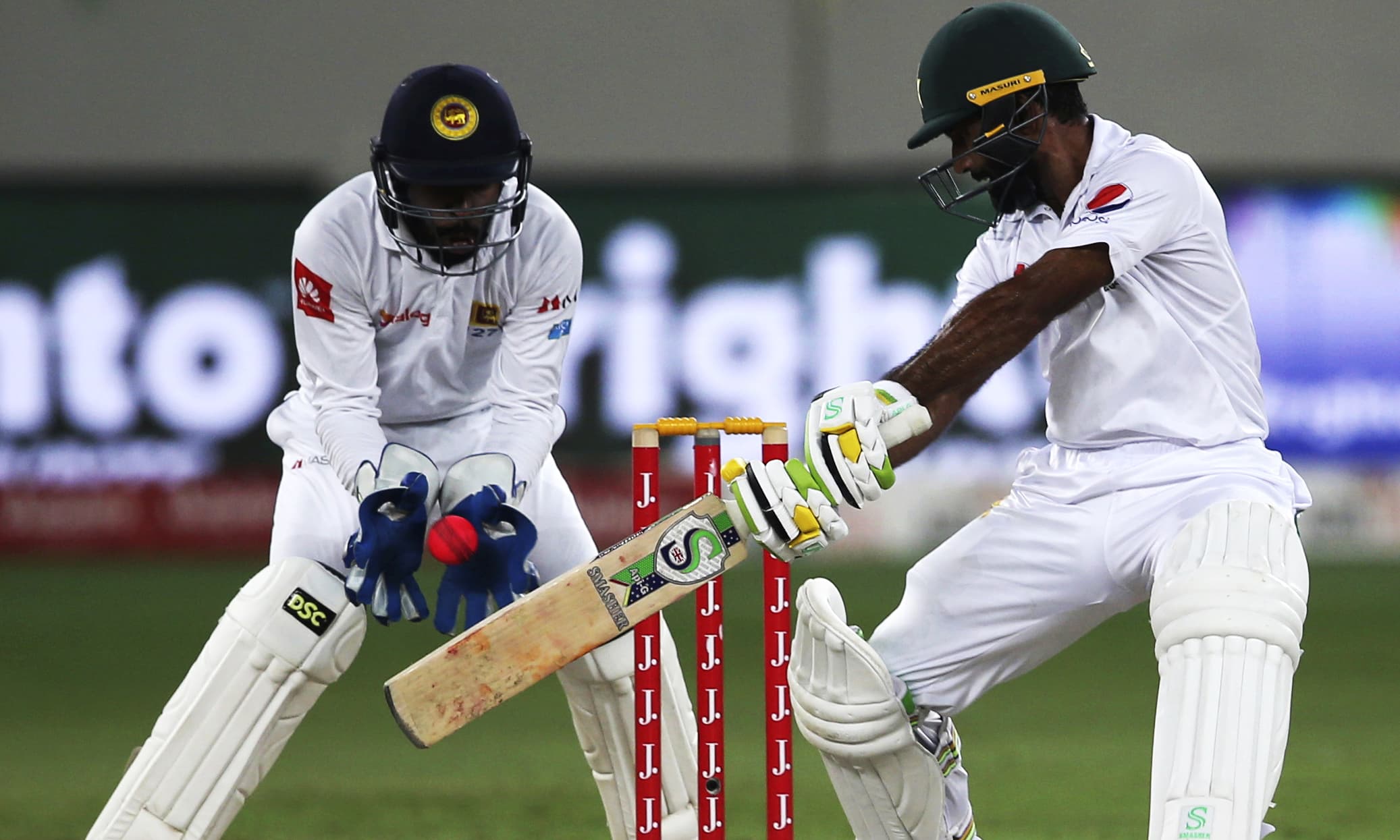 The decision paid off as Dimuth Karunaratne brilliant 196, Dinesh Chandimal 62, Niroshan Dickwella 52, Diluwran Perera 58 helped Sri Lanka post a massive total of 482 runs in the 1st innings. Yasir Shah was the pick of bowlers for Pakistan with figures of 6/184.

Pakistan ended the 2nd day at 51 for 0. It was a superb bowling performance by the Sri Lankan bowlers as they bowled out Pakistan for 262 runs in the first innings. Azhar Ali was the top scorer with 59, Haris Sohail scored 56. For Sri Lanka, Diluwran Perera and Rangana Herath took 3 wickets each, Gamage and Lakmal took 2 wickets each.

On the fifth and final day, Shafiq 112 and Sarfaraz Ahmed 68 could not save Pakistan losing the match. Sri Lanka bowled out Pakistan for 248 to win the match by 68 runs. Dilurwan Perera was the pick of bowlers with 5 for 98. Dimuth Karurante won the man of the match award for his brilliant 196. 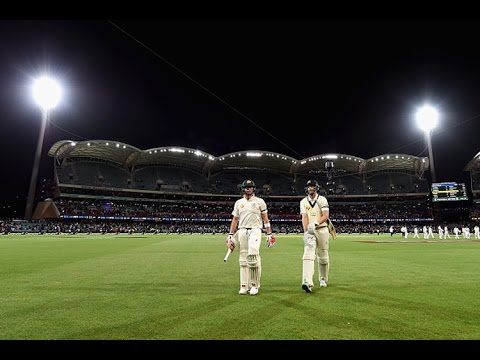 Australia faced England in 2nd Ashes Test match played at Adelaide Oval from 2nd December 2017. England captain Joe Root won the toss and decided to field first. It was a superb batting effort by the Aussies as Shaun Marsh 126*, contributions from Usman Khawaja 53, Tim Paine 57, Steve Smith 40, Pat Cummins helped Australia declare their innings on 442 for 8. Craig Overton took 3 for 105 in the first innings for England.

England ended the 2nd day on 29 for 1. A superb bowling effort by the Australian bowlers helped them to bowl England out for 227. Nathan Lyon took 4 for 60, Mitchell Starc 3 for 49, Pat Cummins 2 for 47, Hazlewood 1 for 56. England created pressure on the Australian batsmen as they took 4 wickets for 53 at the end of day 3.

England bowled out Australia for 138 runs in the 2nd innings. James Anderson 5 for 43, Chris Woakes 4 for 36 did the job for England. Joe Root led from the front as England scored 176 for 4 at end of day 4.

Australia bowled out England for 233 runs in their 2nd innings to win the match by a massive 120 runs. Mitchell Starc was the pick of bowlers with 5 for 88. In reply, Zimbabwe were reduced to 30 for 4 at the end of day 1. Morne Morkel 5 for 21, 2 for 12 each by Rabada and Phehlukawyo bowled out Zimbabwe for 68 runs in their first innings. Kyle Jarvis was the top scorer for Zimbabwe with 23.

Deciding to enforce the follow-on mark, the South African bowlers did the job again to bowl out Zimbabwe for 121 in their 2nd innings. Craig Ervine was the top scorer with 23 for Zimbabwe. Keshav Maharaj took 5 for 59 while Phehluwayo took 3 for 13. South Africa won the match on 2nd day by an innings and 120 runs. Markram was awarded the man of the match.

New Zealand played their first day night Test match on home soil against England played at Eden Park, Auckland from 22nd March 2018. New Zealand captain Kane Williamson won the toss and decided to field first. Trent Boult 6 for 32 and Tim Southee 4 for 25 helped the hosts bowled out England for a paltry total of 58 runs in the first session of Test match.

In reply, Kane Williamson 91* and Henry Nicholls 24* helped New Zealand end day 1 in a strong position at 175 for 3. There was little play on the 2nd and 3rd day as hosts ended on 233 for 4 at end of day 3. On the fourth day, Kane Williamson reached his century and was dismissed for 102.

Henry Nicholls 145* and contributions from lower down the order helped NZ declare their innings on 427 for 8. James Anderson and Stuart Broad took 3 wickets each for England. England ended day 4 on 132 for 3.

Despite a resilient effort by Ben Stokes, Jonny Bairstow, Moeen Ali, Chris Woakes, New Zealand defeated England by an innings and 49 runs on the final hour of 5th day. Trent Boult was awarded the man of the match for his 9-wicket haul in the match. West Indies captain Jason Holder won the toss and decided to bat first. Apart from Jason Holder 74, Shane Dowrich 71, none of West Indies batsmen could not score runs as Sri Lanka bowled out the hosts for 204. Lahiru Kumara took 4 for 58, Kasun Rajitha 3 for 68, Lakmal 2 for 52.

Sri Lanka also struggled with their batting with Niroshan Dickwella the top scorer with 42. Jason Holder was superb taking 4 for 19, Shanon Gabriel 3 for 52, Kemar Roach 2 for 30 helped bowled out Sri Lanka for 154.

The Sri Lankan bowlers showed their class in the 2nd innings dismissing West Indies for just 93 runs. Kemar Roach was the top scorer for West Indies with 23*. Kasun Rajitha and Lakmal took 3 wickets each for Sri Lanka.

Chasing 144 runs to win, Sri Lanka ended day 3 on 81 for 5. A superb partnership between Kusal Perera and Diluwran Perera helped Sri Lanka win the match by 4 wickets to level the series at 1-1. Jason Holder was awarded the man of the match. Holder took 5 for 41 in the 2nd innings. 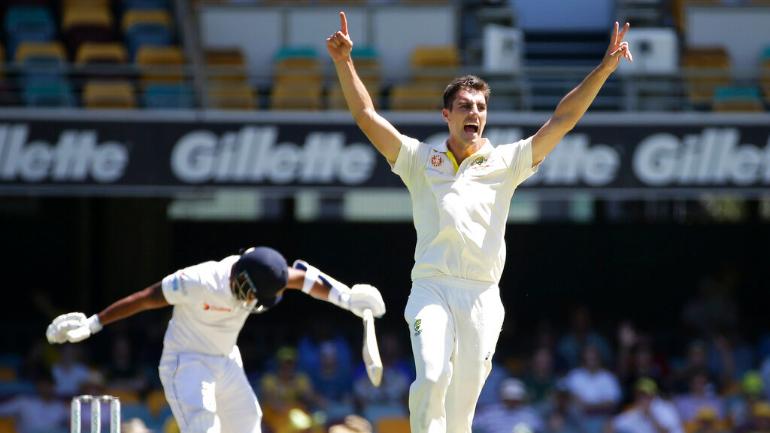 It was a superb bowling performance by the Australian pace bowlers as they bowled out Sri Lanka for 144 in their first innings. Pat Cummins took 4 for 39, Jhye Richardson 3 for 26, Starc 2 for 41. Australia ended the first day on 72 for 2.

Sri Lanka ended the 2nd day on 17 for 1. Pat Cummins 6 for 23, Jhye Richardson 2 for 19 was enough for Australia to bowl out Sri Lanka for 139 on third day. Thirimanne was the top scorer for Sri Lanka with 32.