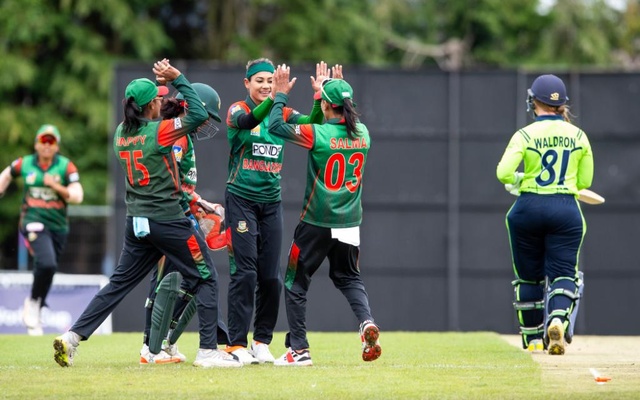 Ireland captain L Delany won the toss and decided to bat first. The Bangladeshi bowlers kept a tight lid on the Ireland batters. Jahanara Alam got the breakthrough dismissing Waldron for 1. In the next over, Nahida Akter got the wicket of another opener GH Lewis for 5. At the end of 6 overs, Ireland was struggling at 15 for 3.

After the power play overs, Bangladeshi bowlers continued to control the run flow and picked wickets at regular intervals. Delany made 25 off 39 balls. Richardson scored a quickfire 25 off 17. Ireland women were bowled out for 85 in the allocated 20 overs. Fahima Khatun was the pick o0f bowlers with 3 wickets for 18 runs. Jahanara Alam, Akter, Salma Khatun and Ritu Moni took 1 wicket each.

Chasing the modest target of 87 runs to win, Murshida Khatun and Ayasha Rahman got the team off to a steady start adding 21 runs for the opening wicket. Garth got the breakthrough dismissing Khatun for 13. At the end of 6 overs, Bangladesh women were 24 for 2.

Ireland bowlers reduced Bangladesh to 30 for 4. Sanjinda Islam and Ritu Moni steadied the innings adding 38 runs for the 5th wicket. Despite 2 quick wickets fell, Islam ensured that Bangladesh won the match by 4 wickets with 9 to spare. Islam remained not out on 32. Prendergast was the pick of bowlers for Ireland with 2 for 11. Garth and MacMahon took 1 wicket each. Bangladesh has been grouped with India, New Zealand, Australia, and Sri Lanka in Pool A.

It was a historic day for Thailand cricket as they defeated Papa New Guniea in the 2nd semi-finals played at Forthill, Dundee on Thursday. PNG captain R Oa won the toss and decided to bat first.

Thailand bowlers created so much pressure on PNG batters. K Arua was the top scorer for PNG with 16 not out. Thailand restricted PNG to 67 for 7 in 20 overs. Sutthiruang took 2 for 15 while Laomi, Kamchomphu, and Padunglerd took 1 wicket each.

Chasing the target of 68 runs to win, Nattakan Chantam and Chaiwai got the team added 31 runs for the opening which laid the foundation. Thailand won the match by 8 wickets with 15 balls to spare. With this win, Thailand women booked their maiden berth in major tournament.

Thailand has been placed with top teams like England, South Africa, West Indies, and Pakistan in Pool B.