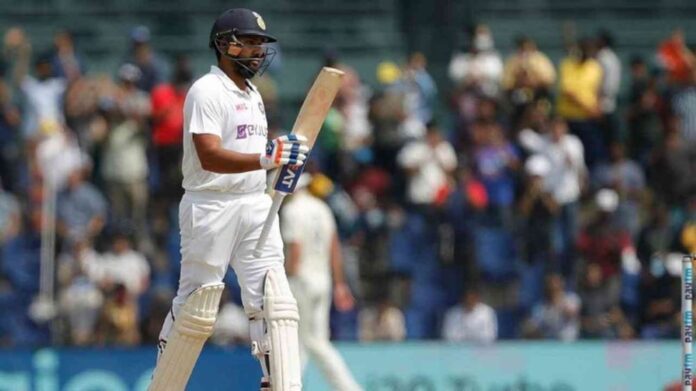 At the end of Day 1 of the Second Test at Chennai, India finished with 300/6 against a seemingly sub-standard English bowling attack. Rohit Sharma, leading the Indian batting from front scored the bulk of the team’s runs, only to be caught playing his most lethal weapon of the innings – the sweep shot. Almost as if to suggest to everyone the way to play on this ‘rank turner’, Sharma was quick on his feet and did not shy away from attacking the spinners.

Especially after Virat Kohli’s dismissal to a classical off-spinner from Moeen Ali, Rohit did not bulge away from playing his natural game. If anything, he settled himself into a more perfect groove to convert the half-century to a mega hundred. He set the tone for the day. All other Indian batters accompanying him, and especially Rahane, revolved their game around Rohit’s hitting. Due process, Rahane himself reached his much elusive half-century in his knock of 67. Incidentally, both Rahane and Rohit Sharma departed playing the same sweep shot, whose employment had amassed them most runs.

However, the 162-run stand between the two also set the game up for the hosts. The pitch remained a subject of discussion throughout the day, rather an interesting fascination in itself. A complete contrast to what the same ground laid up for the First Test, there was something for the bowlers consistently. The relative ease with which Rohit played on the track though, created an illusion that batting on this track could be easy if planned well. This illusion might well do wonders for India moving forward.

Yes, there was a proper plan in place. Yes, the English bowlers had built their squad given the nature of the surface, but the rebellion from Rohit Sharma remained too much to contain for the visitors. Coming off 47 balls, this was also Rohit’s fastest fifty and his fourth consecutive conversion to a big hundred. Another exciting aspect of Rohit’s batting was his alertness and the eagerness to rotate strike continuously. He would play a couple of dots, then go for a big one and quietly nudge around for a single the next ball. And the template seemed constant across his entire span of the innings.

In hindsight, we all might understand the importance of Rohit’s innings much better. His execution is certain to encourage the English batters to play across the line, in the process, giving a healthy chance to more experienced Indian spin bowlers. The likes of Ashwin, Axar, and Kuldeep will play a crucial role with the ball in the second innings. There was a minimal hint of reverse swing with the old ball, urging the faster bowlers to expect a quiet day. At 300/6, the Indian lower-middle order would look to score quick 50-60 runs on Day 2, morning and thereby secure India a position, much unlikely to lose from.

Outstanding innings from Rohit. Made the track look a lot easier than I suspect it is.

Meanwhile, Rohit Sharma in the press conference also spilled the beans about his approach. “We knew about how the pitch was prepared and that it was going to turn. We had good training sessions before today and we trained according to what we were going to expect,” he said.

“When you’re playing on turning pitches, you have to be proactive; you can’t be reactive. Getting on top of the bowler, making sure you’re ahead of him was very, very crucial. So made little adjustments based on that and understanding if it’s turning then how big it is turning, whether it’s bouncing or keeping low. Those are the things I considered before making any shot-making decisions,” Rohit added.

Further explaining his shot selection and his ploy to keep English bowlers at bay, he said “I have seen Moeen Ali bowl a lot. He actually bowls very well in the rough and the sweep is a shot that can frustrate a bowler if you are playing that shot well. There’s not much the bowler can do from there, or the pitch can do from there. And it was a safer option to take as well because both fielders were on the boundary, so even if you top-edged, it was going to fall safe. Those were the ideas and thoughts behind the sweep shots. It was a percentage shot to play as well because he was bowling outside off-stump, so the LBW doesn’t come into play.

“And when Leach was bowling, he was bowling stump to stump, so it was important for me to use my feet, play with the turn and not with a straight ball facing him… with the turn slightly angled. I made sure that I pushed the ball between covers and point.”

The carefully laid out plans allowed Rohit other options when the spinners erred in length, allowing him the options of a cut or loft. And the puffs of dust or the pitch’s demons were otherworldly for a while. Or so Rohit made it seem.