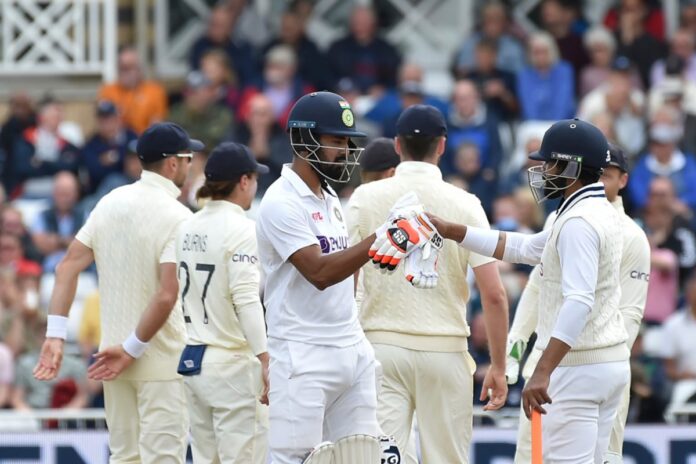 The Indian team was successful in obtaining a crucial first-innings lead of 95 on Day 3 of the First Test at Trent Bridge on Friday. Led by opener KL Rahul and all-rounder Ravindra Jadeja with the bat, team India survived through the middle-order scare before building up past England’s 183 run-total. Despite the rain-breaks that made players rush in and out of the dressing room every now and then, Indians managed to get a stronghold going into Day 4.

As on Day 2 when the rain intervened, India was left in a spot of bother at 125/4. More than the equation, it was the kind of wickets the experiences of Pujara, Kohli, and Rahane had gifted to the opposition. Rohit Sharma and KL Rahul had a brilliant opening stand of 97 runs before the former was held at Deep Third Man off a seemingly harmless bouncer. The strong middle order followed suit with scores of 4, 0, 5 respectively. The well-set Rahul and dynamic Pant were the two left in the middle to counter the whistling swing of Anderson in overcast conditions just when the rain tumbled down.

The break was important in respect of the game, as it allowed the batters to regroup and rest. Day 3 began well with both Rahul and Pant batting well together. While Rahul looked absolutely flawless with his drives and square cuts, Pant played with his own undying aggression. Success for England came 7 overs into the day as Pant was caught in the pursuit of yet another attacking shot. Robinson was the first to make inwards after rain already had a couple of hide-and-seek spells. While the skies cleared up later in the afternoon and as play resumed, India was found wanting of a steady partnership.

Thankfully, they found one in form of Rahul and Jadeja that took India, first beyond the English total and then beyond 200. The G.O.A.T James Anderson had his 620th Test wicket in the form of Rahul (84 of 214 balls) becoming the third-highest wicket-taker in the world. One brought too as Shardul Thakur too, edged one to slip off the fast-bowling legend. It was now up to Jadeja and the tail to try and hang around for a few runs. India has been the worst coming down to batting performances for the last three wickets. However, today the script was meant to change.

Jadeja was the first to take the ante against the England bowlers, bringing up a half-century in process. He was not afraid to take the risk and owned most of the strike in an attempt to score maximum runs. He was dismissed soon after his fifty by Robinson with India 232/8. It was all up to the Indian bowlers to explore their own batting against a brisk pace attack. But to everyone’s surprise, the likes of Shami, Bumrah, and Siraj all contributed decently with the bat taking India to a 278 run total. Sam Curran’s short-pitched gifts and Bumrah’s rampant hitting in the last few overs had propelled India to a 95 run lead, putting them in a commanding position.

India's lower order has given the team a wonderful chance in this game. It has been a major issue in recent years and hopefully, this is the beginning of more little contributions

With a couple of days of play left, and with rain still expected to play a major role in deciding the fate of this Test match, Indians will want to dismiss England as quickly as possible. The hosts are currently well set at 25/0 after 11.1 overs, i.e. at the latest rain intervention. What does Day 4 have in stocks tomorrow? Only time has answers.