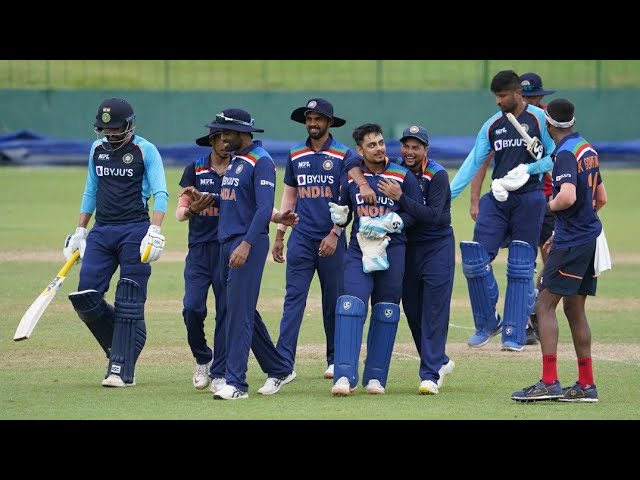 The Indian team in Sri Lanka has been out of quarantine for a while now and has indulged themselves in multiple intra-squad practice games this week. It gave the players the opportunity to play themselves to the conditions in an attempt to stake a claim for a spot in the playing XI. Earlier, coach Rahul Dravid had revealed that not all players would get a go on this tour, making these practice games more crucial.

While the matches are void of any media coverage, BCCI ensures timely updates on Twitter. As per reports, Team Shikhar and Team Bhuvneshwar competed in the first Intra-squad T20I on Monday with the latter completing an easy run-chase of around 160 with more than 2 overs to spare. A half-century from Suryakumar Yadav and a 60+ run opening stand from Prithvi Shaw and Devdutt Paddikal led the charge for Team Bhuvi. Meanwhile, the scoring for Team Shikhar was looked after by Manish Pandey, who returned with a fifty, and the youngsters Ishan Kishan and Ruturaj Gaikwad.

The recap with a twist 🔀

The second practice match was played today after a day’s break, details of which are awaited. In a series of pictures that BCCI shared on Twitter, one could see the Indian youngsters sweat it out in Sri Lanka. Several youngsters including Chetan Sakariya, Suryakumar Yadav, Prithvi Shaw, Kuldeep Yadav, and Hardik Pandya were seen in action today as well. One of these pictures also suggests that all-rounder Hardik Pandya is back with the ball in hand, a sign many Indians will be happy to look at with T20 World Cup 2021 in sight.

Furthermore, BCCI also posted an interview with Ashish Kaushik, the team’s traveling physio talking about how the lads have adapted to hot-humid conditions. He also shed light on the process of keeping players fresh and maintaining their fitness levels. He said, “To perform in these conditions is pretty amazing.”

India will begin their Sti Lanka campaign with the first of the three ODIs on July 13, which will be followed by a three-match T20I series.