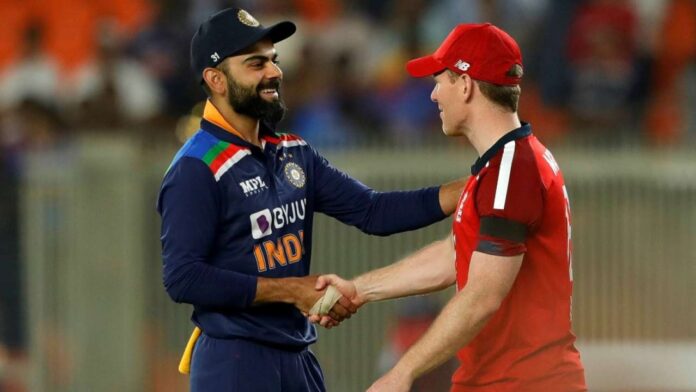 After a fierce, competitive, and thrilling T20I series, the India-England convoy shift base to Pune for the three-match ODI series. In the post COVID era, with Tests, as well as T20Is, getting more preference, and popularity, the One Day Internationals were seemed to be let go throughout the world. But with the World Cup Super League in place and the build-up to the 2023 ODI World Cup already in place, this 3-match ODI series will hold significance. It could potentially be the mode of coming back into form for many non-performing players. Both India and England have gone in with almost a full-strength squad. And especially on the Pune wicket, it wouldn’t be a surprise if the two teams find themselves in the middle of a high-scoring thriller.

Last India played a One Day Internationa was in New Zealand before the COVID19 pandemic. In foreign conditions, the Indians could not manage to do well, losing all three games by a handsome margin. The whitewash affected India’s momentum from a successful T20I series so badly that Indians also went on to lose both the Test matches and crucial points in the World Test Championships. England on the other hand, have had some One Day experience against Ireland in July and against the touring Australians in September. They too did not have a very fruitful one-day season losing once against Ireland and twice against Australia in each of the 3-match series. Going into the forthcoming 3-match series, both teams would therefore look to make a bold statement, emphasizing their One-Day International dominance.

India would look to eliminate the Toss factor, play their best XI in the First ODI:

Virat Kohli who opened the innings alongside Rohit Sharma declared that he would shift down back to No.3 in the ODIs. Shikhar Dhawan, Rohit’s long-standing partner will take his guard at the top, with possibly a few new faces getting a game in the middle order. It would be interesting to see if India opts for KL Rahul over the in-form Rishabh Pant. Both as a batsman as well as the wicket-keeper in white-ball cricket, KL Rahul has done exceedingly well in the last couple of years. However, his recent form in the T20Is could see him start on the bench, only to feature later in the series. India also has the option of playing Suryakumar Yadav over Shreyas Iyer, but the latter is likely to retain his No.5 positions, at least at the top.

Indian bowling will see the return of Bhuvneshwar Kumar to the longer white-ball formats as well. While Shardul Thakur is almost certain to play second fiddle to Bhuvi, one of T Natarajan and Mohammad Siraj could find a place in the Indian pace bowling unit. The team management will also have to make the tougher decision of choosing between Washington Sundar and Krunal Pandya, both worthy and capable with the bat at No.7. Sundar has bowled well in tandem alongside Yuzvendra Chahal, India’s other spinner in the XI, but it is the domestic form of Krunal Pandya that could earn him another India call-up. The toss could also play a key role, but Virat Kohli and India would be eager to let it not affect their approach and mindset.

In Root and Archer’s absence, England could find the ODI series a little difficult:

The 2019 World Champions have enjoyed tremendous success in the last 2 years. Though the team has lost 3 of its 4 One Day Internationals, Eoin Morgan’s England has revolutionized one-day cricket to a great effect. Morgan himself, alongside the other senior pros including Bairstow, Buttler, Stokes, and Root have handled England very well and together have produced stellar performances one after the another. But in absence of the resting Joe Root, England will have a huge void to fill. Joe Root has been key to the English ODI success, and his absence is sure to be felt during the ongoing series. England has included the likes of Liam Livingstone and Sam Billings, one of whom could find a place in the XI on Tuesday.

Just like the batting, England will have their problems with the ball with Jofra Archer back home nursing his elbow injury. The express pace and tall bounce from Archer and Wood made the Indians struggle for their runs in the T20Is at Ahmedabad and if the past at Pune is to be believed, it could well trouble them there as well. In Archer’s absence, Reece Topley or Tom Curran might partner Mark Wood, with Adil Rashid and Moeen Ali filling up the two spinner slots. England will also have an option to choose between Sam Curran and Matthew Parkinson depending on the pitch and weather conditions.