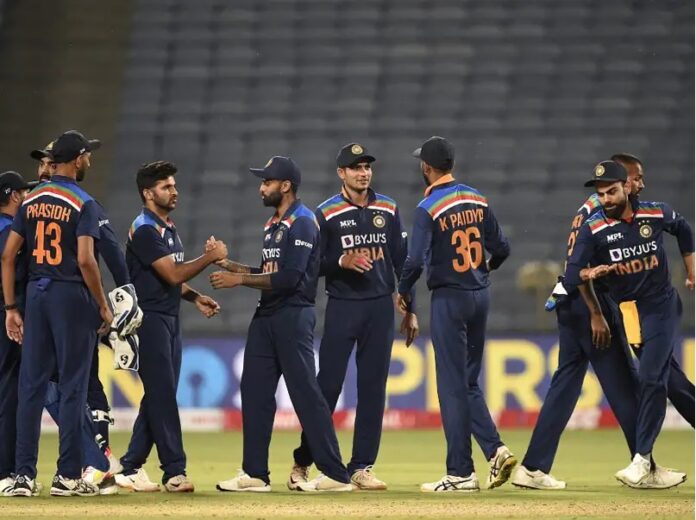 The Indian team for the first time since 2020 won the first match of the series taking a 1-0 lead. The topsy-turvy game against England at Pune the other day, was as Virat Kohli put it – “One of India’s sweetest wins from all times.” While it was always easy to let the match slip away to an occasional English upper hold, India found ways to come back every single time. Their batting clicked, with the ‘out-of-form players getting a confident outing, and the resurgence of the bowlers summed it up facilitating the 51-run win. But the job is only half done. The Indian cricket team’s hunger to win and succeed is ubiquitously well-known and the team will only look to keep their juggernaut rolling in the Second ODI at Pune on Friday.

Both Virat Kohli and Eoin Morgan how the England wicket was conducive to batting and the seemingly high 318-target was only a sub-par total as per their assessment. Historically, Pune has been a high-scoring ground and the second ODI is expected to be no less as well. However, the Indian bowlers showed how hitting the right lengths earned rich dividends. The England bowlers as well in their initial spell looked threatening with the seaming ball, promoting an even contest.

Virat would look to end the century drought, another debut on cards for Suryakumar:

It’s been 42 innings since Virat Kohli scored his last international centuries. He’s played a few crucial and match-winning knocks in the said time but hasn’t quite been able to convert those 50s into big hundreds. Going into the second ODI with some rich form, he would be eager to end the drought of centuries and thereby also set up another staggering win for India. The others in the Indian batting order, openers – Rohit Sharma and Shikhar Dhawan, KL Rahul, ad the Pandya brothers will also look to make their opportunities count. Both KL Rahul and Krunal Pandya were sensational in the last ten overs of the previous game. Not only did they bring up their half-centuries but also reached there in super-quick time propelling India beyond 300. It is this confidence and belief with which the two will intend to come out on Friday.

The bowlers on the other hand too had an eventful outing. As it turned out, they outplayed the English batsmen, except for the opening partnership. Coming back from 135/0 in 14.2 overs to dismiss them at 251 was a super-human effort spear-headed by another debutant, Prasidh Krishna, and the ever-so-impressive Shardul Thakur. To repeat that kind of performance with the ball could potentially win this game for India single-handedly as well. While India is unlikely to change their impeccable fast bowling attack, they might opt for the spin of Chahal for Kuldeep. India will also be forced to make one change in the middle order. Shreyas Iyer who injured himself in the first game has been ruled out of action for a minimum of six weeks. His fellow Mumbai teammate, and India’s most impressive debutant, Suryakumar Yadav could get his cap in the longer white-ball format over Shubhman Gill. However, it’d be interesting to see how he approaches his batting given the kind of floating role Iyer plays at 4.

The English captain Eoin Morgan is all set to miss the second ODI with an injury. Wicket-keeper Jos Buttler has been named his replacement for the match. Though the change in leadership is unlikely to affect any dynamics of the team, it’d be interesting to see how Buttler employs his tactics and strategies against the surging Indian batsmen. The English Cricket Board also confirmed that Liam Livingstone will make his ODI debut in the middle order, with most people suspecting Jos Buttler to move a place up the order. Meanwhile, Billings who also injured himself while fielding in the first game is expected to be replaced by T20 sensation Dawid Malan.

“I had the hand re-dressed before the start of training today but it quickly became apparent that I found myself protecting the injury and getting into the wrong positions to catch the ball,” ECB’s website quoted Morgan as saying. “There’s nowhere to hide on the field in international cricket these days, especially in limited-over formats so it didn’t require any great thought to make myself unavailable. It was a freak injury and it’s extremely frustrating but there’s nothing I can do about it. It’s now just a case of letting the cut heal. I have every confidence in Jos and the rest of the squad coping without me.”

The England bowlers did decently well in the first game, especially with the new ball. Though they could only cap up their effort with a solitary wicket in the first 15 overs, they will look to make deeper inroads in the second ODI. Given how Sam Curran troubled the Indians early on, England could be tempted to play Reece Topley over Tom Curran. The spinners Moeen Ali and Adil Rashid would also be keen on not giving away too many runs, facilitating a release in pressure, as observed the other day. On the batting front, a lot will depend on the England top-order with the likes of Bairstow, Roy and Stokes expected to play a marathon inning. The tourists would look to close in on the hosts and corner them out before they shut their door of chances to win the series.