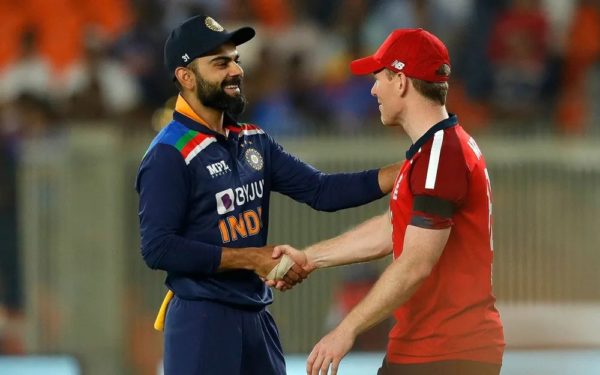 England edged India out despite Virat Kohli’s masterstroke in the 3rd T20I the other day at Ahmedabad to take a crucial 2-1 lead in the 5-match series. While toss has been a massive factor in each of the three games so far, either of the two teams would look to battle against its nemesis in the two games. The square has shown a glimpse of pace, sluggishness, and bounce in its three times of asking respectively. It would therefore be interesting to see how it behaves the fourth time around, and how the teams utilize its offerings.

After a couple of games in 50% capacity ground, BCCI announced that the remaining T20Is will be played behind closed doors. Both India and England would therefore need to find their own ways to keep themselves pumped up and charged throughout the 40 overs.

India expected to go all-out in a ‘Make or Break’ situation:

Trailing 2-1, the Indian team will have a task at hand. Their immediate concern to address will be that of their diminishing top-order. The Indians have lost three wickets within the powerplay twice this series, and the same has led to their downfall on both occasions. India has tried 3 opening combinations in the three encounters but is expected to continue with KL Rahul and Rohit Sharma at the top going into the final two T20Is. The Indian captain, as well as the batting coach, have openly defended Rahul and arguably India’s best T20 batter from recent times will have multiple points to prove to himself.

The only Indian meanwhile who seemed at extreme ease maneuvering the English bowlers to all parts is Virat Kohli himself. After a duck in the first game, he has bounced back with scores of 73* and 77* respectively and has just seemed to belong to every situation that he’s walked in. His innings from the other day are perhaps regarded as one of his best, despite India not winning the match. The skipper would also be expecting support from the bowlers, performing much as they did in the 2nd T20I. Therefore, going into this crucial encounter, India is not expected to do many changes. The only one possible – swapping the two debutants between themselves.

England would look to seal the T20I series:

The England team has been successful in burying the demons from the Test series, performing exceedingly well in the first three T20Is. In the first and third especially, the England bowlers have been right on target, not allowing any of the Indian batters to settle in. They have been disciplined, calculative, and have mixed their length well. Jofra Archer and Mark Wood’s exploit of pace early on and Jordan’s change of pace at the back end of the innings has been key to holding the Indians from scoring big shots. Though Virat Kohli has still found ways to continue scoring, the English bowling attack has looked relentless and questioning against everyone else.

Going into the 4th T20I, the England team would look to seal the series with a win on Thursday. Eoin Morgan has handled all his options well and the availability of both Buttler and Bairstow at the top has aided the team brilliantly. Jason Roy too has been fairly consistent with starts, helping England gain the initial momentum. It is highly unlikely for the England team to bring in changes, in their XI for the next game.