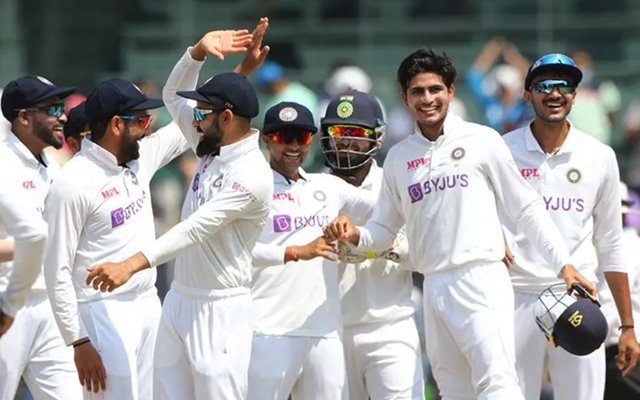 Indian team reigned supreme over the Englishmen in the Second Test at Chennai, winning by 317 runs. On a pitch that offered turn and was criticized by many on the first two days, the Indian batsmen showed the world its true value. The fact that the Indians could manage around 300 runs in both innings, erased all ‘rank-turner’ criticisms and highlighted the technical disparity between the two teams. In sub-continental conditions, spin bowling is an art, and so is the ability to counter it. The Indians, exemplary of their prowess with spin bowling, outplayed England in all three departments to level the series 1-1.

It all began on the first morning where Stuart Broad only in his first spell, got a ball to nip back in, taking along some dust off the deck with it. The dry-ish wicket showed signs of wear and tear from the very beginning, but never seemed unfit to play on. The approach of the Indian batsmen, and especially the attacking style of Rohit Sharma – in his crucial innings of 161 – was proof that batting on this track was possible. However, bowlers were deemed to have an upper hand if they remained consistent. The wayward bowling from the Englishmen in the first innings can therefore be termed as the culprit for letting India put a solid score of 329 in the first innings. Along with Sharma, contributions from Rahane and Pant also helped India cruise along.

A few other complaints from the deck were answered further when the Indians took ground with the bat again. The technique of Virat Kohli, his approach to the game, his crisp footwork, sound defense, and lucid mindset were again a masterclass for the Englishmen to learn from. With him, Ravichandran Ashwin as well showed his class with the bat. The homeboy looked keen on scoring runs at every opportunity and used the sweeps to good effect. He also played well with the tail to bring up his 5th Test match century. Once again, the England batting unit was showed the way to bat on spin tracks and more importantly, had clarified to the world that the pitch was not as bad as it was said to be. Just like how swing-bowling does in English conditions, this tiring wicket in the hot and humid Chennai stadium tested the batsmen to their very basics.

On either side of the Indian batting workshop, lay a dismal England batting scorecard. Their failure especially in the first innings, brought to the eye, a plethora of technical and skill-level discrepancies. There was an evident flaw in the approach of the England batsmen. Yes, the relatively experienced Indian bowlers were double as experienced as the rookie England spinners but the visitors clearly lacked application and skill. They were very tentative with the footwork, failed to pick the ball off the hand, often committed onto the front-foot early, and never seemed to gather the understanding of the pitch.

A fifer from Ashwin in the first innings and one from Axar in the second did not seem to take a lot of effort. The England team had the highest partnership of 38 due course of this Test, that too courtesy of hard-hitting Moeen Ali for the last wicket. England was graced by a flat deck and a favorable toss in the First Test. However, to continue winning in India, it is almost imperative to know to face as well as bowl spin bowling. England might have also suffered from their own rotation policy, not allowing its bowlers consistent runs with the ball. The two off-spinners, Moeen Ali and Dom Bess have played alternately and if the word going by is to be trusted, Moeen Ali will fly back home before the next Test. Going into the Day-Night Pink ball Test in Ahmedabad, England would therefore look to get all their concerns resolved and turn up being a better team overall.

The one good thing, too strong to be missed though, is the emergence of the two keepers from this Chennai Test. Rishabh Pant and Ben Foakes, baring a very rare missed chance, were excellent behind the stumps. Both of them were on their toes, quick and alert behind the sticks, making it much more challenging for the opposition batsmen. As for Rishabh Pant, his cheers and conversations from behind the stumps kept every Indian crowd excited.