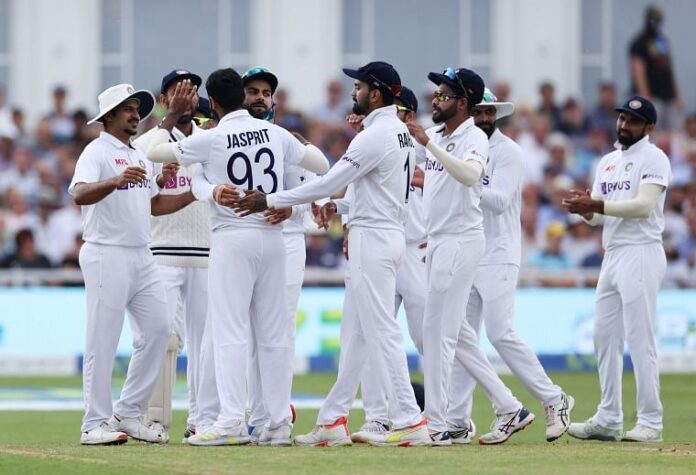 The Trent Bridge, filled with more than 18000 spectators witnessed one of the most eventful opening days of Test cricket. England, after a decent start, lost their way to the brilliance of the Indian bowlers. They were caught wanting for runs impatiently, with multiple batters giving it away cheaply after Tea. Needless to say, Indians dominated the proceedings on Day 1 of the First Test

While England missed their veteran all-rounder Ben Stokes in the middle order, the onus lay on the openers to lend a decent start. However, Bumrah caught Rory Burns in front of the stumps in the very first over putting the hosts on the back foot. The Indians continued the pressure, not allowing easy runs and maintaining some serious discipline. Mohammad Shami was the pick of the bowlers early on but failed to be amongst wickets until lunch. The second wicket came through the other speedster Mohammad Siraj, who dismissed Crawley caught behind a few overs before lunch.

England went into the break with a score of 60/2 and a well-set Joe Root just beginning to break the shackles. His partner Sibley had settled through and despite the initial troubles suggested some stability. But that wasn’t meant to be. Just like the first session, England lost a wicket early on in the second and was again, under pressure. This time the release came in with Jonny Bairstow and Joe Root who stitched a crucial partnership for the fourth wicket in excess of 70. The Indian bowlers were consistently hitting the good areas but weren’t able to curb the scoring or pick wickets.

Going back to the ace of the morning, Virat Kohli put Shami back into the attack just before Tea and boy he delivered. A close LBW call was initially turned down, perhaps sighting an inside edge. Some impetus from the bowler, and Shardul Thakur from mid-off, however, urged the skipper for a review, a successful one. Bairstow’s dismissal on the stroke of Tea had tilted the game right back in the balance and the escaping Englishmen now weren’t the only happy side heading into the short break.

With the kind of team combination England had opted for, they would bat deep till No.9, a serious concern given how India had struggled to get rid of the tail in 2018. More importantly, Indians were yet to dismiss captain Joe Root. The skipper looked extremely comfortable at the crease, reaching a Test match fifty at a very healthy Strike Rate.

What followed post the Tea session was phenomenal. Shami once again opened the floodgates immediately after resumption. And then, there was no looking back. A well-combined effort from Mohammad Shami, Shardul Thakur, and Jasprit Bumrah reduced England to 160/9, and eventually 183/10 stamping their authority right up on the first day of the five-Test long tourney. Bumrah was the pick of the bowlers picking up 4 wickets, while Shami and Shardul settled for 3 and 2 respectively. The Indian ploy of dropping their most experienced spinner for the fourth bowling option had worked. The decision that looked haywire in the first place had begun to make sense, as the pitch too showed minimal signs of spin on offer.

The mighty Bumrah is back. That WTC final was one of those games all good players experience. This was Bumrah enjoying his bowling and making batting look difficult

In the short session of 13 overs that the Indian openers did manage to play out, India finished 21 for 0 with both the openers unbeaten on 9. Meanwhile, the weather forecast for tomorrow suggests some burst of rain later in the day, India will look to make the most of its opportunities. Getting the first-innings lead will be extremely crucial given the nature of the wicket. The Indian batters with points to prove, to themselves, and to everyone else, would want to get going early on.

If India is to bat more than two sessions tomorrow, England will only be left to play catch-up for the rest of the game.