Fearlessness, aggression, hunger to win and succeed – all these define modern day Indian cricket. However, this ‘never-give-up’ attitude roots back to 1983 in India’s memorable comeback against Zimbabwe. The world had written off Kapil Dev led Indian side even before the tournament began. It was off sheer belief and confidence that those 11 Indian men did wonders. With losses in both their previous games, India stepped onto the field against Zimbabwe with a point to prove. And it was this day, that year that India pulled off an unfathomable win at Tunbridge Wells that inspired generations to follow. Ironically though, the media had boycotted the match and it lived only through select pictures and spoken memories.

Batting first, Indians lost their top 4 batsmen for less than 10 runs. The situation worsened further after Yashpal Sharma’s caught behind dismissal as the scoreboard read 17 for 4. The skipper Kapil Dev stood alone, stranded without any solid partners. Not only the cream but more than half of India’s milk was robbed early by the pace battery of Peter Rawson and Kevin Curran. Fortunately, Dev found a willing partner in Roger Binny as the duo stitched a steady 60 run stand for the sixth wicket. John Traicos dismissed Binny for 22 while Ravi Shastri followed the suite to skipper Duncan Fletcher. Reaching a good score remained a far fetched dream as India now seemed uncertain to even play out their full 60 overs.

“When India lost their fifth wicket at Tunbridge Wells on Saturday morning with the score at 17, the day’s main issue appeared to concern the fate of the picnic lunches,” wrote David Lacey in the Guardian.

The hopes lay on a single thread by the name Kapil Dev. Though he had begun slowly with the bat, he was at a comparative ease negating the threat from the Zimbabwean bowlers. Having brought up his fifty in the 26th over, he began shifting gears. His second fifty came in the next 13 overs while the third in even lesser. His acceleration was extremely rapid, considering the pace and standard of the day. It brought immense joy to the few Indian supporters present. Kapil Dev made optimum use of the ground’s lopsided dimensions by targeting the shorter boundary. 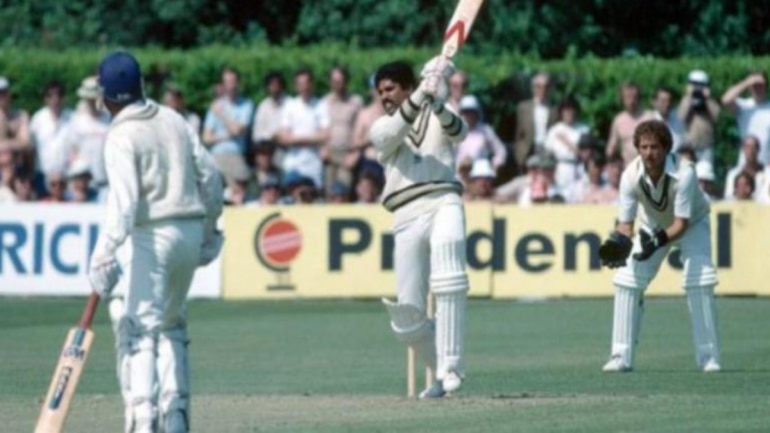 “It was a calculated assault rather than an inspired slog,” wrote Lacey for The Guardian

S Madan Lal gave Kapil company for another 60 runs after Shastri’s wicket. At his dismissal, India were 8-down for 140 in the 44th over. Syed Kirmani, who joined later, was successful at defending most balls that came his way. He scored a vital 24* runs during the process and supported Dev ably in the 126 run stand. In those last 16 overs with Kirmani, Kapil Dev took the bowlers to the cleaners. The supporters who celebrated the Indian misery at the start, searched for shelters from Kapil’s mayhem by the end. In fact, Kapil’s last 75 runs came from only 38 deliveries, a T20-like innings 20 years before the format was even formalized. The all-rounder was efficient at finding the gaps, ensured pinpoint placements and played with the field and the shorter boundary intelligently. Mind you, all of that taking no undue risk and retaining an absolute sense of gravity of the situation.

Kapil Dev ended with a knock of 175* from 138 balls with a frightening strike rate of 126.81. He smashed 16 fours and cleared the boundary as many as 6 times. His innings took India to 266/8 in their 60 overs, a score beyond par given India’s struggle initially. In the second innings, the Indian bowling led by Madan Lal and Roger Binny took full advantage of the overhead conditions. Despite a steady start, they rattled Zimbabwe in the middle overs and bowled them out for 235, 31 runs short of the target. It is arguably one of the most thrilling victories that Indian cricket has ever witnessed. It was a start of a revolution and provided the Indian team with the needed boost. A boost that powered them through, to rally past Australia, England and West Indies in the following matches and lift the prestigious Prudential World Cup of 1983.

“The Zimbabwe match was one match where, the entire team started feeling, we can beat top four teams. On given day, we can beat anybody,” Dev said in a video shared by ICC on Twitter. “That inning gave the team reassurance that we have the ability that we can win under any circumstances, and we can bounce back from any situation.”

Kapil Dev’s 175* is still counted among the most breath-taking innings in ODI cricket ever. The excitement, enthusiasm, encouragement, energy, ecstasy and exhilaration that it brought on the face of a cricket fan is immeasurable. This innings was not only special for that one match, but iconic in the grander scheme of things too! On June 18, 1983, Kapil Dev marked a turnaround (for better) in Indian cricket.