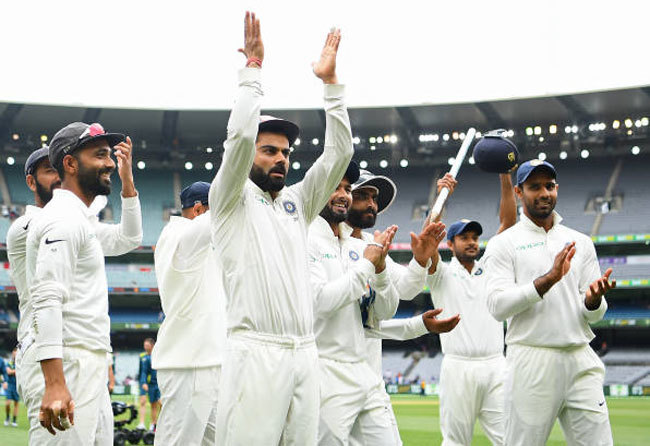 BCCI announced the 32-member squad for the India’s Tour of Australia 2020-21 after the Senior National Selection Committee’s virtual meet on Monday. The Virat Kohli-led side is set to play 3 T20Is, 3 ODIs and 4 Tests down under starting November 27. Though the team does sport a couple of new names in limited-overs as well as the Test format, they will miss the services of veterans Rohit Sharma and Ishant Sharma following their injuries. Bhuvneshwar Kumar who also left the IPL midwaya

While the Indian vice-captain suffered a hamstring injury in Mumbai Indians’ match against Kings XI Punjab, Ishant Sharma was ruled out courtesy a strain suffered during practice in the on-going Indian Premier league (IPL). According to BCCI’s statement, the progress of the two Indian mainstays will be monitored but they will not travel with the team to Australia. It is said that the news guarantees curtains to Rohit Sharma’s IPL journey this year as well.

Indian Team for the White-Ball Series:

The Tamil Nadu mystery-spinner and architect, Varun Chakravarthy received his maiden call-up for the national side. The KKR-spinner has been in form this season and has performed exceedingly well. His five-wicket haul the other day against the Delhi Capitals is said to have sealed him the place in contention. Sanju Samson, who is yet to get back to form after an early flourish this season also kept his place in the side as the second wicket-keeper. Mayank Agarwal, the other impressive youngster this season, has also confirmed his place in the T20 squad and is likely to make his debut up the order alongside Shikhar Dhawan.

The Indian team has settled into a stable balance with the likes of Shreyas Iyer, Manish Pandey and KL Rahul holding up the middle order. The later boost of Hardik Pandya, who will miss his brother Krunal’s company this time around, is also good to have.

India has had an impressive run in Tests. Despite a disturbing 2-0 whitewash against the Kiwis earlier this year, the team is still at the top of the World Test Championships table. The riches of Pujara, Rahane and the ability of Vihari down the order have helped Virat Kohli relax and even prosper in his role as captain. The Indian pace battery as well has been well equipped and has struck most often. Their resurgence under Kohli to pick up all 20 wickets most times has been a pleasing site to savour.

The opening trio of Mayank Agarwal, Prithvi Shaw and Shubhman Gill have retained their spot in the squad. Rishabh Pant too has been selected as the wicket-keeper alongside Wriddhiman Saha while the welcome change has come in, in the bowling department. The selectors have shown immense trust in Navdeep Saini choosing him for all the three formats. His RCB teammate Mohammad Siraj as well has been roped in as a possible replacement for Ishant Sharma. Kuldeep Yadav has been included as the third spinner but is unlikely to feature in the XI.

Interestingly, BCCI also announced that the four Indian pacers – Karthik Tyagi, Kamlesh Nagarkoti, T Natarajan and Ishan Porel will also travel with the team for practice and exposure. They will also fill in the places for reserves in the team. Meanwhile coaches Ravi Shastri, Vikra Rathore, Bharat Arun and Test specialists Cheteshwar Pujara and Hanuma Vihari have arrived in Dubai to join the team.

The resurrection of Indian cricket post the pandemic has been phenomenal and the Tour of Australia is sure to add even more value. As for Virat Kohli, his men as well as the fans from around the globe, though void of hostile fans, the tour promises to be an exciting, promising and a well-fought contest.

And as is for the Indians, “The cricketing Winter Mornings are back!”