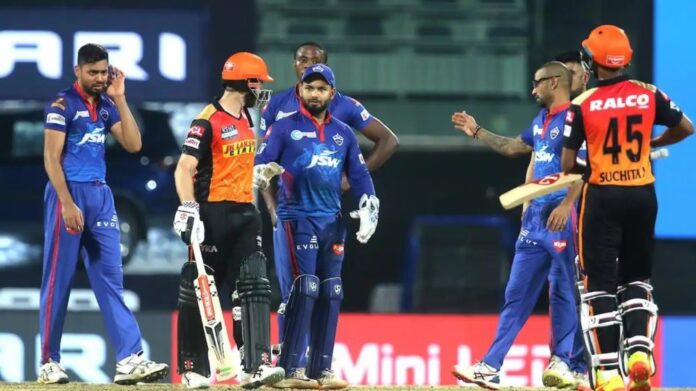 The difference in the approach of the two teams, both at the top of the table, was evident with the kind of team selection they went in with. While CSK reinforced their side with an extra spinner, RCB replaced one of theirs with a pace bowler. And as it’s always been, MS Dhoni came out as a better accessor of the pitch, with the Mumbai wicket uncharacteristically holding up when bowled slower. Bangalore was put under pressure straight away in the powerplay by the two Chennai openers, Ruturaj and du Plessis, but it was soon later that the scoring rate dropped and also resulted in a few crucial wickets. Harshal Patel entering to bowl the final over had figures of 3-0-11-3 but his day wasn’t meant to be. Ravindra Jadeja got onto the purple cap holder like an avalanche hitting Harshal for as many as 37 in a single over. The miracle included 5 sixes and a four and was just short of IPL’s all-time highest record of 38. The mayhem also allowed Chennai to post a 188 run target, that looked well beyond par on the Mumbai wicket.

The only way for RCB to get through it was a good start, and they did get one through Devdutt Padikkal and Virat Kohli. However, once Virat Kohli departed in the 5th over, the RCB king-pins fell down like a domino effect. The experiment of sending Sundar up the order did not work yet again, but it seemed very unlikely to have affected the outcome of the game. In the middle overs, Jadeja and Tahir in tandem dismantled the RCB middle order. The miracle-man Ravindra Jadeja picked up 3-13 in his three overs and also contributed in a couple of key run-outs. By the end of 20 overs, courtesy of the more than ‘bits-and-pieces’ allrounder, RCB were restricted to a mere 118, lending CSK a 69 run win. The win pushed them to the top of the table, while brought RCB down to third place.

The Delhi Capitals were set to bat first on the Chennai wicket. They started exceedingly well in form of Shaw and broke through the powerplay losing no wicket. The first break for SRH came in the 11th over when Rashid Khan foxed Shikhar Dhawan with a beauty. Shaw too followed his partner the immediate next over having completed an impressive half-century. Captain Rishabh Pant, and veteran Steve Smith now had the job of ensuring a finish and taking their team to a safe target. Against a rather feeble SRH middle order, a minimum of 150 was needed to be put on. Courtesy of some smart gameplay by both men at the crease and courtesy of some acceleration at the death, Delhi managed to set a 160-run target.

The chase was meant to be exciting and on the Chennai wicket. Jonny Bairstow started it off with some extravagant hitting but soon ran David Warner out in the due process. The wicket of Bairstow also came in the powerplay 28 runs later with SRH 56/2. What transpired post that was no short of a miracle. Every single player who stepped in could not even collect the DC spinners of their hand and struggled by and large against them. SRH kept on losing wickets at regular intervals. They had all but lost hope, courtesy of one of the world’s finest cricketers – Kane Williamson. The NZ captain played the situation more than the scorecard or the result and finally yield fruit as he took the team close to success. With the kind of simplicity, grace, risk-free shots, well-thought placements, and toying at the field that Williamson could do from one end, all other SRH batters, except Suchith’, remained pathetic till the very end. It was only in the final over against Rabada that Williamson missed out on the win by a single run.

What it also meant though was that the match would go into the one-over eliminator. Williamson, the crisis man walked into the centre to face Axar Patel, an interesting spinner choice by Delhi Capitals. Axar gave away only 7 runs in the 6 balls, keeping it flatter and not allowing the batter to get under the ball. A short run from Warner on the last ball ended the SRH batting stint and it was time for Rashid Khan to show his prowess with the ball. Unfortunately, though, Rashid could only contain the runs till the last ball and SRH ended up losing the game after a couple of leg-byes.

Overall it was a game that emphasized quality cricket from both sides, especially Williamson, till the Super Over. And as it turned out, it was once again a short-run and a super-over that’s cost them the game.

Just about the opposite of what happened over the weekend, Monday was relatively bland and uneventful as the two teams battled out an average contest. While both the teams committed plenty of mistakes with the bat and in the field, the team with comparatively lesser mistakes and a slightly better control saw it through. Other than a few excellent catches in the field, there wasn’t much for either side to celebrate. However, the game serves great importance in the context of the entire tournament and could well prove to be the decider as time progresses.

Punjab having put to bat first by Eoin Morgan, found themselves into trouble pretty quickly. The batters in pursuit of quick runs tried too much too soon and ended up being bamboozled one after the other. KL Rahul was dismissed in the last over of powerplay by Shivam Mavi and soon after, Cummins found the edge of Chris Gayle on review. The Kolkata bowlers had not only picked up two early wickets but also kept the Punjab batters in check. Youngster Shivam Mavi was in the forefront of it bowling all his 4 overs up top in a single spell for only 13 runs. He, alongside Cummins, set up the stage well for the spinners to be introduced. Both Chakravarthy and Narine were phenomenal bowling in tandem in the middle overs, and the 3 crucial wickets between them were perhaps the final nail in the coffin for Punjab batting.

A late outburst from Jordan helped PBKS still set a 124 run target, inarguably one of the easiest on any surface. However, KKR did not benign quite well. They lost Gill, Rana, and Narine in quick succession struggling 17/3. Punjab bowlers, Henriques, Arshdeep, and Shami all looked in the proper control but things were meant to change, the momentum was meant to shift. Led by Rahul Tripathi and Eoin Morgan, KKR continued steadily without taking any undue risks and keeping the required run-rate under 6 throughout. They also took on a few bowlers selectively to release pressure if any. The kind of solidarity and confidence from MOrgan was largely unknown throughout this tournament but the fact that he continued and guided his team to a win despite the wickets of Tripathi and Russell by the end, speaks volumes about what coming back into a form meant for the KKR captain.

Yes, the game did not have many exciting elements other than a magnificent catch by Bishnoi, but overall in the context of the IPL 2021, this game could well be the decider in hindsight.