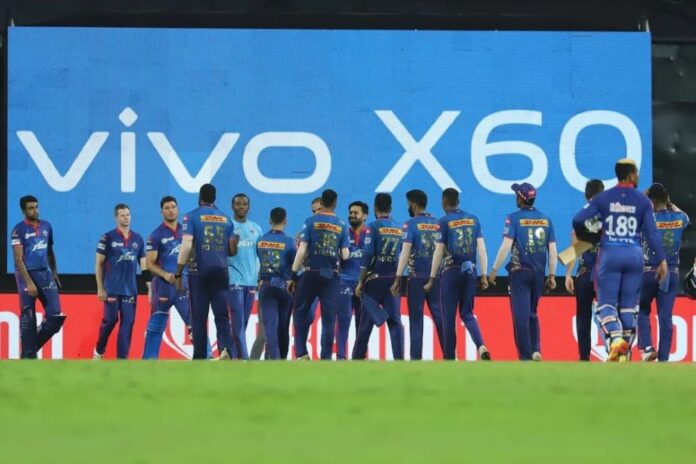 Delhi Capitals having arrived in Chennai only in the afternoon got the better of their counter-parts Mumbai, finally this year after having a go four times in the last season. It was a well-compiled and well-structured win for the Delhi Capitals, as the batsmen kept their cool and played to the best of their abilities. It was an all-around effort across the department from the Rishabh Pant-led Delhi side, who climb on to No.2 in the points table leveled with RCB on points.

The work-horse Mishra set Delhi up with the ball:

Mumbai had a good start with the bat, despite the early loss of Quinton de Kock. Both Rohit and Surya looked in great touch but couldn’t quite capitalize on their moments. Surya was out caught off Avesh in the 7th over and soon after, the well-set Rohit Sharma followed. The wicket of Rohit Sharma opened the floodgates for the Delhi bowlers, and especially Amit Mishra to spin a web around the Mumbai batters. Mishra who had gone for plenty in his first overcame back brilliantly to dismiss the MI captain and Hardik Pandya, both in space of 3 deliveries.

Meanwhile, Lalit Yadav who was brought into the attack from the other end did not allow the MI batters to get going either. He kept it tight and controlled and was also awarded by the wicket of Krunal Pandya. The downfall continued as Mishra then got the better of Kieron Pollard with a vicious wrong-one. MI was reduced to 84/6 in the 12th over with an uphill task ahead. Ishan Kishan and Jayant Yadav at the crease, tried to play out a few balls and hit some runs but only managed to strike it at a run-a-ball. Soon after, Kishan was dismissed by the miracle-man Mishra again leaving MI 123/7 in the 18th over. The next 2.3 overs for MI could only produce 14 more runs as they finished 137/9 in their 20 overs.

A Matured and Tempered run-chase:

Yes MI was almost 15-20 runs short of the par score, but the job was only half done yet. It was imperative for Delhi Capitals to not lose too many wickets and play each and every ball to its merit. They were also aided with some luck as Dhawan’s grab from Pandya in the very first over was termed illegal in the first over. However, Mumbai fought back picking up Shaw in the immediate next over by Jayant Yadav.

That brought the Aussie maestro Steve Smith to the crease, and alongside Dhawan, he stitched a very crucial stand in the middle overs. The duo did not take any undue risks, ensured consistent strike rotation, and punished only the occasional poor deliveries. The required run-rate not being too high helped the cause as well. The batsman who followed Smith at No.4, Lalit Yadav, was also watchful and played a matured innings to take Delhi Capitals home. Mumbai over the past couple of games had managed to choke their opponents in the death overs, but given the temperament and authority shown by the Delhi batters, they could not do much this time around.

Outstanding, sensible run-chase from @DelhiCapitals. To adjust to the conditions so quickly after playing in Mumbai is admirable.

Bumrah and Pollard also bowled a few no-balls in the last two overs making the run-chase extremely easy and comfortable. The chase not only gave Delhi the required impetus to get back to their winning ways but also emphasized a few weak links in the Mumbai camp. The middle-order for MI has lost the approach, that is frequently attached to their style, and has been unable to finishing games well of late. Having said that, these are only the initial days in the tournament and the comeback-kings could well be scripting one, yet again, this season,