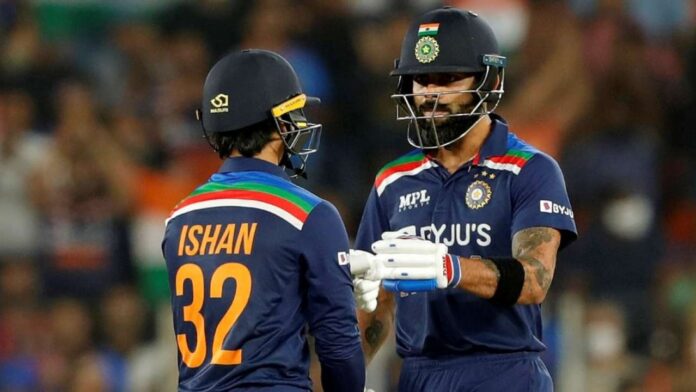 The debutant Ishan Kishan starred with an impressive half-century in India’s commanding win against England in the Second T20I at Ahmedabad. He seemed to be at extra-ordinary ease hitting all around the ground with minimal effort. The fact, that Kishan also had the Indian captain for support also helped him blossom further. Kohli, who himself remained unbeaten in another run chase, stitched a crucial 94 run stand with Kishan after Curran’s wicket-maiden in the first over.

Virat Kohli:
“When you play in the IPL with such dominance like he (Ishan Kishan) has and he is a fearless character and he knew that he was hitting the ball well and he is very calculated and not restless. Today that counterattacking innings from him and that partnership was needed.”

A relatively sluggish wicket at Motera, helped India’s cause enabling a smoother run-chase. The Indians had ample time to place the ball in gaps or even hit big. Kishan, who hit as many as 4 maximums in his knock, was well-calculated. It was only the second time, an Indian batsman had scored a half-century in a T20I debut. Perhaps, the youngster also helped Kohli settle into a groove after a nervous start. The maestro, however, gained complete control of his game later on and let the entire run-chase revolve around his own batting.

What a dream debut for @ishankishan51 absolutely fearless about his game ! That’s the beauty of playing ipl at a young age you just used to the atmosphere and you go and express your self ! !! And skipper is back with some class of his own !!@imVkohli #ENGvIND t20

Early on, the bowlers had won their battle against the Englishmen restricting their score to only 164. The pace, that rather was the reason for India’s downfall in the first game, was taken off completely by the Indian bowlers. They made England batsman work hard for every single run, made the boundaries more difficult to strike, and eventually picked wickets out of the resulting panic. While Sundar and Chahal bowled well throughout the middle overs, picking three crucial wickets between them, Bhuvneshwar and Shardul were exceptional at the death. Hardik Pandya also chipped in with a decent 4-over spell, his first in international cricket since 2019.

England’s only batter to show some signs of aggression and comfort, despite not quite being at his best, was Jason Roy. Coming into the series with multiple points to prove, and with a potential place in the team at stake, Roy has been impressive in both the T20Is. He seemed to be the only one today, comfortable in attacking the Indian bowlers. There were vital contributions from Morgan, Bairstow, and Malan as well, but none with the needed pace and momentum.

It would be fair to say that India and England swapped roles as compared to the last match, and so did the pace and sluggishness of the wicket. Stroke-making though has gotten easier with time in either match, a phenomenon often related to the moisture and dew on the surface.

Eoin Morgan:
“We were probably in and around par, but India bowled well and there’s slightly less pace today on the pitch. They put us on the back foot from the start and pace off the ball is always challenging for players. There’s always an advantage in chasing statistically and the disappointing area is we couldn’t counter the opposition attack in the first ten overs”

The win for India poises the five-match series evenly, increasing the excitement for the three blockbusters to come. While both teams will have a few calls to make in the upcoming matches, given their rotation policies, it is a headache for another day. The quality of cricket on display throughout the Test, as well as the T20I series, has been top-notch and the three T20Is to come are likely to be no different.

Indian fans meanwhile, will continue to have an eye on Ishan Kishan and the unexplored prowess of Suryakumar Yadav. I’m sure, they too would be eager to contribute to the team’s success.