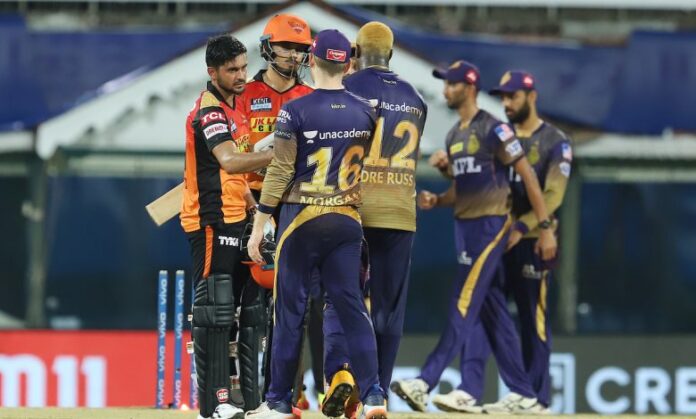 How often do we see a complete game of cricket with no blunders and no silly mistakes from either side? Kolkata against Hyderabad at Chepauk was one such was perhaps one of the most beautiful cricketing games that one will come across. Though Hyderabad lost by 10 runs, there isn’t a lot for the team to think about. Except for a couple of natural failures, they were extremely good with the bat and had all the ingredients to make a winning statement any other day. After all, this is the beauty of the IPL, and wouldn’t be surprising to see a few more such games in the future.

Many boxes ticked for @KKRiders. So many stars there and yet, they found others to play decisive roles. Rana, Tripathi and Prasidh Krishna. Like the look of the team.

It started with a batting masterclass from the Kolkata Knight Riders’ openers, Nitish Rana and Shubhman Gill who got them off to a good start and well carried forward by Rana and Tripathi later on. Rana in fact went on to score a magnificent 80 including a few crisp drives and fearless pulls. Incidentally, his scores from the last six innings follow the pattern – 80, 0, 87, 0, 81, 0 – perhaps, suggesting his score to come. Meanwhile, Tripathi, Rana’s partner in that 93 run partnership for the 2nd wicket, scored at a brisk pace and did not bulge down from going against the Hyderabad fast as well as spin bowlers. He countered the threat of Rashid well and also took the likes of Sandeep Sharma and Vijay Shankar apart in the middle overs. His half-century set up the foundation for KKR to score beyond the average score of around 170.

Another cameo that perhaps affected the game was that from Dinesh Karthik. Much like the 8 ball knock he played in the Nidahas Trophy final, Dinesh Karthik began his onslaught fright from the word go. His 21 runs of just 9 balls, including a big 17 run over of Bhuvneshwar Kumar gave the required impetus to the KKR batting at the death. Courtesy of his cameo, KKR ended up with 187, at least 10-15 runs over the par score. Two paced at times, the track in Chennai still had something for the bowlers in it and with a strong KKR bowling attack, the Sunrisers had an uphill task at hand.

Sunrisers Hyderabad, on the other hand, did not begin their innings quite well. Warner was dismissed to a peach of a delivery by Prasidh Krishna, while Saha chopped on to Shakib al Hasan in the third over. Struggling two down in the powerplay, Manish Pandey was joined in by a surprise No.4, Jonny Bairstow at the crease. The two began cautiously not taking too many risks but putting the bad balls away. The acceleration only began later in the 8th over with Bairstow scoring 15 of Russell. He switched gears with relative ease and went on to also bring up his 6th IPL half-century, and perhaps giving the Orange Army some hope to get over the line. However, he hit one straight to Rana at the backward point off Cummins ending the 92 run-stand for the third wicket.

Coming in for a new batsman was never going to be easy, meaning Manish Pandey was expected to take charge of the innings from thereon. He tried to take on the KKR bowlers and also succeeded to a fair extent early on. However, he couldn’t quite shift gears as easily as Bairstow or Rana had done earlier. The consistent fall of wickets on the other end did not help the cause either. Nabi and Shankar departed in quick succession with SRH still needing 38 of the last two overs. Young Samad had joined Pandey in the middle as Cummins marked his runup to bowl the penultimate over. To everyone’s surprise, it was the Samad, who managed to hit those long boundaries as opposed to the well-set Manish Pandey. Samad hit a couple of clean sixes off Cummins bringing the equation down to 22 of the last over.

The exciting contest, still pretty much in the balance, was only meant to fall apart for the Sunrisers from thereon. The on-field duo did not manage to counter Russell’s impressive yorkers as Kolkata ended up scoring only 177 in their 20 overs. More was expected out of someone like Manish Pandey but he played a very impressive and crucial knock irrespective of the result. A power-packed show from Rashid Khan in the first innings, the ability of Samad by the end, and the undying form of Bairstow were the few positives that SRH will take along to the next game against RCB on Wednesday.

Meanwhile, KKR will face MI next Tuesday at the same venue with the hope of repeating the same performance against the reputed Mumbai batting lineup. The Kolkata bowlers too will play a crucial role in containing Mumbai, and especially one could well see more use of Harbhajan with the ball. Nevertheless, one only hopes that the quality of cricket on display in this IPL increases with each and every passing game.