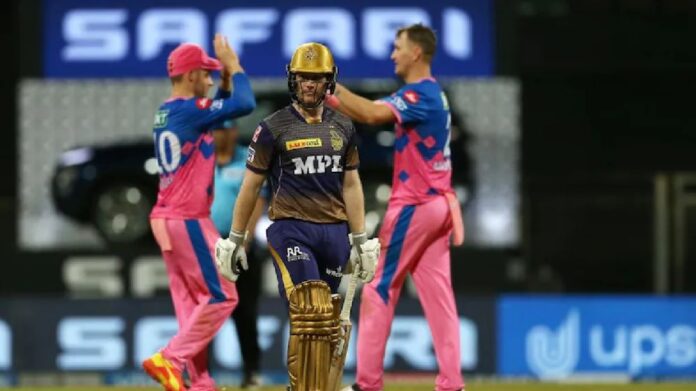 After a disastrous loss against Rajasthan in Mumbai, the Kolkata Knight Riders find themselves at the bottom of the table with a solitary win in the 5 games. In order to be anywhere close to qualification, Kolkata will now need to win at least 6 of their last 9 games in an unforeseen situation. There’s been a lot of talk about their failed strategies and execution but in order to script a comeback, Kolkata needs to get back to their drawing board and start anew and afresh.

One of the only two players to have done decently with the bat for Kolkata is their opener, Nitish Rana. But even he, on Saturday, looked completely out of sorts, not being able to time or place the ball as he wanted. The syndrome hit every other member of the Knight Riders setup as none could get good starts. The top scorer for Kolkata on a Mumbai deck was the other consistent, Rahul Tripathi with 36. Finishing at 133/9 in their 20 overs, Knight Riders were at least 30 short of par and needed brilliance with the ball to win the game.

Early wicket in a low-scoring defense is key, but not when you dropped sitters on the park. Shubhman Gill dropped Yashashvi Jaiswal off Shivam Mavi in the very first over, and Kolkata seemed down and out throughout the game, since then. They had some occasional moments with Varun Chakravarty picking up a couple of wickets, but none of the bowlers looked threatening and Samson-led Rajasthan eventually had an easy win. While Rajasthan would have cherished the rare win for them this season, Kolkata finds themselves struggling without a fixed plan or tactic in place.

The think-tank involving the likes of Brendon McCullum, Kyle Mills, Abhishek Nayar, and others, will have a lot of work to do in the background. The role of senior pros in the team, Dinesh Karthik, captain Eoin Morgan, Andre Russell will also be crucial for the Kolkata Knight Riders in pursuit of changing their momentum. Having said that, for a champion team like them, it’ll only take a couple of good matches to get back into form.

The most important aspect in rebuilding this team would be defining roles to each and every player, a phenomenon that someone like RCB has done well through the first 4 games of the tournament. KKR will also have to back their players and not shuffle them much in the playing XI as well as the batting order. Fortunately for KKR, this stage has graced them much early in the tournament.

The change in venues could also help them get their mindset right. The underexplored Narendra Modi Stadium is suited for high scores of what limited it had on offer against England last month. Therefore, Ahmedabad will be critical to Kolkata’s playoff chances and the team will look to step in with confidence, determination and hopefully, a renewed spirit and intention.