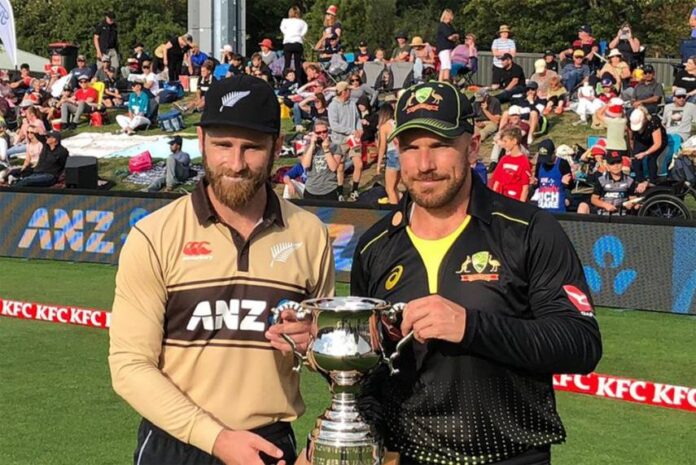 New Zealand banked on brilliance from the flamboyant, Devon Conway to beat the Australians in the First T20I by a 53 run margin. The left-hander, scoring his 5th consecutive fifty in T20 cricket was close to a well-deserved hundred as he denied the second-run on the last ball of the innings. Ironically, Conway had done the difficult part of hitting Kane Richardson for a six and four of the previous two deliveries but could not manage another run off the last ball, finishing on 99*.

Conway walked onto the crease with Kiwis in a spot of bother early on. However, he was watchful with his approach and took risks only when needed. On a difficult, swinging wicket, he rode the bounce well, got to the pitch of the ball against the spinners, and scored efficiently all-around the ground throughout. His innings were a perfect example of building solid innings on the Christchurch wicket. He almost eliminated the equation of the wicket from the game and more importantly, powered New Zealand from 19/3 to 181/5, a safe total most days.

Devon Conway now has as many as three half-centuries in only the first five T20Is and hasn’t been dismissed for more than 350 runs in T20 cricket. Talking about his form, the South African born Kiwi said, “You’ve just got to ride that wave as long as it lasts, but [I am] pretty happy; it’s a good start to the series, and [we have] just got to keep the momentum going. For me, the key to my batting is just playing strong shots and running hard between the wickets. [I’m] not looking too much into it and just enjoying the moment.”

New Zealand skipper, Kane Williamson also showered praise upon his team’s most recent recruits, “An incredible knock [it was],” he said. “It was obviously a really tough start for us with the bat and to see those partnerships through the middle order led by Devon with an unbelievable 99 on a surface that starting on wasn’t all that easy. We saw that with a bit of swing in our innings as well. An incredible knock and a great effort to get to that 180-mark.”

The knock from Convay thereby also allowed the bowlers to go all out with their defenses. They enjoyed the freedom to pitch the ball up, get it to move more in the air as well as off the deck, and do wonders. The Australians were reduced to 19/4 in the first 5 overs and only played catch-up in the run-chase that followed. Courtesy of a late fightback from Agar, the Australians could salvage some pride scoring 131 before the felling of the last wicket.

Ish Sodhi was the pick of the Kiwi bowlers picking up 4 wickets in his 4 overs. Whereas the initial damage was caused symmetrically by Southee and Boult. Together the bowling attack for NZ clicked equally well as their middle order and set their pavement to a victory.

Overall, the hosts had completely outplayed their neighbors and the tour for Finchy’s men had begun with all wrong happenings. The only positive for Australia meanwhile was all-rounder Mitchell Marsh, who showed glimpses of form in his 45-run knock. Talking to the press after the match, Marsh emphasized the importance of Conway’s innings under pressure and lauded the Kiwi bowlers for their staggering start.

“It was an incredible innings (from Conway). He is obviously someone we’ll have to make sure we do a lot of homework over the next few days. On days like that, you have to take your hat off and say well done. There’s no doubt all our bowling group was well planned; he just had a great day.”

“The way they (NZ bowlers- Southee and Boult) swung the ball – they probably swung it for seven or eight overs which, in T20 cricket, is pretty rare but we know they are world-class swing bowlers. They have done it for the last 10 years, those two. We’ll have to combat that in the next few games if it swings.”

Seeing the lighter side of a superb knock, Indian spinner R Ashwin tweeted:

Devon Conway is just 4 days late, but what a knock 👏👏👏 #AUSvNZ

Going into the 5-match T20I series, NZ has taken the crucial 1-0 lead and Finch’s Australia will now be forced to play the catch-up equation yet again.