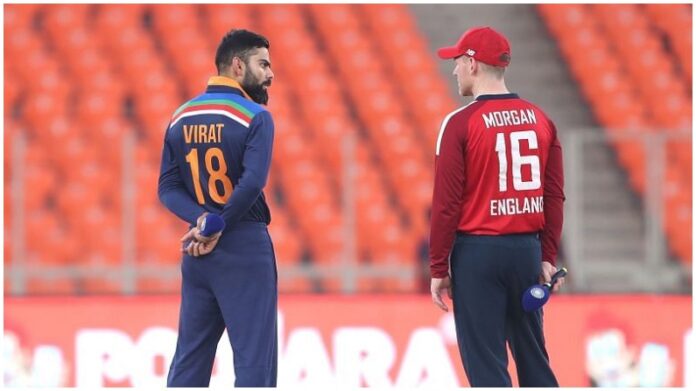 “This is one of our (India’s) sweetest wins in the recent past,” said Virat Kohli in the post-match presentation and it is almost impossible to not agree to the same. With Jonny Bairstow and Jason Roy literally massacring the Indian bowling, an Indian win was only a far sight. But the kind of comeback staged by the Indian bowlers was phenomenal, picking up all the English wickets for just 116 runs. England once 135/0 in 14.2 overs was dismissed for 251 (42.1 overs).

Virat Kohli:
“This one is right up there with any other. Getting nine wickets so quickly is outstanding. To come back into the game the way they did is brilliant. I’m a really, really proud man right now. The team showed great character and intensity.”

The authority, pride, and joy in Virat Kohli’s voice was an indication of how brave and how confident has the team been in due course of this match. Despite putting up in excess of 300 on the board, both the captains agreed that it was a sub-par total, and given the England players had not given their wickets away, it could have been a thrilling contest. Pretty much through the first half of the second innings, Bairstow and Roy dominated the Indian bowling scoring in excess of 9 runs an over. A boundary each over had almost become a routine and with the required rate under 6, it all looked under control for the hosts. They had taken the debutant Prasidh Krishna for plenty and except for Bhuvneshwar Kumar, everyone else recorded expensive first spells.

However, the nemesis in the opening partnership was brought by the debutant Krishna himself. Completely against the run of play, in his second spell, Prasidh Krishna shortened his length and floated the ball more towards the batsman. Roy having misjudged the bounce on the wicket sliced it straight to Suryakumar Yadav at backward point, who juggled but clung on for the crucial dismissal. In the immediate next over, Krishna followed it up with the wicket of Ben Stokes bringing India back into the mix. But the work had only just begun. A longish England batting lineup awaited the Indian bowlers, who for the first time in the match seemed to dominate proceedings from either end. Both Shardul and Krishna had found their respective lengths and together began exerting pressure on the English players. The duo picked up seven wickets amongst them, laying the foundation to a pleasing victory. Prasidh Krishna in fact walked off with India’s best-ever bowling figures on debut (8.1-1-54-4).

One other debutant who shined, with the bat, was Krunal Pandya. After representing India in the shortest formats, the elder of the Pandya brothers worked his way out of domestic cricket to earn a maiden ODI call-up. The southpaw came in courtesy of a tremendous Vijay Hazare Trophy performance and almost looked like he belonged to the international scene. After a few quick wickets had hampered India post-Dhawan-Kohli’s century run stand, Krunal along with KL Rahul built up the innings well and then unleashed himself onto the scene with a blistering fifty. In pursuit of the milestone, dedicated to his late father, Krunal also became the fastest ever to a half-century on an ODI debut. His aid KL Rahul too brought up his half-century in quick time as the duo added 112 off just 57 for the sixth wicket partnership and took India to a competitive total.

The man of the match though was awarded to Shikhar Dhawan for his valiant knock of 98, opening the innings for India. The England bowlers Sam Curran and Mark Wood were extremely good with the new ball not allowing the Indian batters to score freely. Dhawan, having seen the difficult phase through, joined forces with the Indian captain for a beautifully stitched 105 run partnership. It was these crunch moments where the Indian team showed patience and composure that helped them win the game with eventual ease. It was indeed one of India’s greatest comeback wins of all time.

This match has ebbed and flowed too much….the moment you think one team is looking in control, the opposition bounces back. Doesn’t happen that often in ODI cricket these days. #IndvEng

India now takes a lead in the opening match of the series for the very first time in this tourney. With a couple of more games to come from the same Pune stadium, one expects more and more high-scoring encounters but with a hint of help to the faster bowlers. It’ll be also exciting to see how both the teams cope up with their share of injuries and what is the team combination like going into the next ODI on Friday.