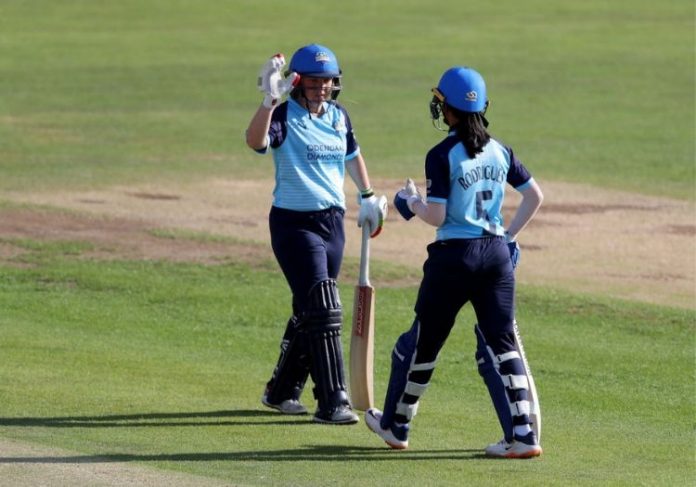 The Kia Super League was a successful tournament as Western Storm defeated Southern Vipers to win the title for the 2nd time. In this year’s edition, Jemimah Rodrigues and Deepti Sharma took part while Smriti Mandhana and Harmanpreet Kaur continued their contracts for their respective franchises.

With this being the last edition of Kia Super League, it was a great performance by the Indian players who showed their class with the bat. Smriti Mandhana and Harmanpreet Kaur have taken part in previous Kia Super League editions while Deepti Sharma and Jemimah Rodrigues impressed with stroke play for their respective franchise.

Here we look at the performance of 4 Indian players in Kia Super League 2019.

1. Jemimah Rodrigues
Playing in her maiden Kia Super League, the young right-handed batter Jemimah Rodrigues impressed one and all with her batting. In 2019 edition, she played for Yorkshire Diamonds and was the 2nd leading run-getter with 401 runs in 11 matches ( 11 innings) with the best score of 112*. It was a great tournament for her as she scored 1 century and 2 half-centuries.
She scored the fastest century in the tournament in a great knock of 112 off 58 balls. Despite her efforts, Yorkshire Diamonds could not reach the finals.

2. Smriti Mandhana
The young left-handed opener batter from India, Smriti Mandhana impressed once again with her aggressive style of batting. She scored 268 runs from 11 matches ( 11 innings) with 2 half-centuries. She had the best score of 72. Despite her not scoring big runs in the tournament, Western Storm went on to win the title.

Smriti Mandhana registered successive half-centuries in victories against Yorkshire Diamonds at the top. After that, she failed to score many runs. In the last 5 matches of the tournament, her highest score was 24. In the finals against Southern Vipers, she did not open her account.

She was the top scorer in last year’s edition with 421 runs from 10 matches ( 9 innings) with 1 century and 2 half-centuries.

3. Harmanpreet Kaur
The explosive right-handed batter Harmanpreet Kaur played for Lancashire Thunder in the 2019 edition. She scored 261 runs from 10 matches (10 innings) with the best score of 58*. Kaur scored 2 half-centuries in the tournament.

4. Deepti Sharma
The young all-rounder Deepti Sharma had a decent outing in her debut Kia Super League season. She played for Western Storm in this year’s edition.
With the bat, Deepti Sharma scored 106 runs and scored valuable knocks lower down the order. She played a key role in helping Western Storm win the title by scoring 39 runs in the finals against Southern Vipers.
Deepti Sharma also contributed well with the ball taking 9 wickets with his off-spin. It was a brilliant performance by the young all-rounder. It augers well for Indian Cricket as she will play a key role in the upcoming matches for women in Blue.