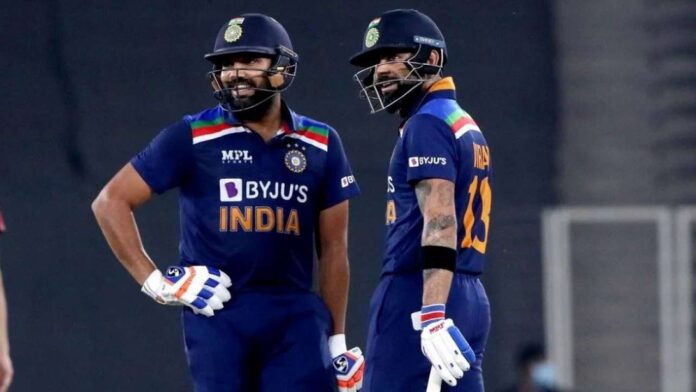 Virat Kohli was almost forced to open in the fifth and the series-deciding T20I against England on Saturday. He alongside Rohit Sharma formed perhaps India’s dream pair as the duo opened for the first time since 2018. It was rather the kind of start that they helped India with that made everyone wonder why the same experiment was not done earlier. The two, playing together, at the top also opened up many options for India lower down in the order.

Rohit Sharma with his inherent aggressive nature was well complimented by Kohli’s characteristic watchful start. The pitch, with a hint of extra pace and bounce, helped the ball come onto the bat nicely, and it was not a long after the first over that the runs had started flowing. Both the batsman looked in sublime touch and India’s first 50 run opening partnership of the series came inside the batting powerplay. In fact, the duo went on to score 94 in just 9 overs with Rohit being the aggressor. His knock of 64 gave Kohli the freedom to take his time and settle into a good groove to capitalize more in the second half. Virat’s unbeaten knock of 80 eventually proved to be match-winning and helped India set up a 225 run target – their highest score ever against England in T20Is.

What the Virat-Rohit combination also allowed is to play the explosive Suryakumar Yadav at No.3. The Mumbaikar who scored a half-century in the first time of asking in the 4th T20I is being talked about a lot in recent times. Virat himself has been vocal about how Surya is an X-factor in the time with an insane ability to hit the ball hard from the word go. His grind in domestic cricket as well as the IPL for years, has finally paid off and is yielding him rich defends on the stage that matters. Needless to say, if groomed and managed well, Suryakumar Yadav could well be India’s ace going into the T20 World Cup.

It could then also facilitate the floater Hardik Pandya to play at No.4 along with Rishabh Pant and Shreyas Iyer completing the Indian middle order. The three could potentially shuffle amongst them in any required combination and still seem as threatening. The void created at No. 7 could then be filled with Ravindra Jadeja when he returns. It will not only allow India to have a batting depth up to No. 7 but will also give them a choice of playing four proper full-time bowlers. The move of Virat opening the batting will therefore open India, a window of opportunity to structure their team according to the wicket and the opposition without any restrictions.

So what do people think about Rohit Sharma and Virat Kohli opening the batting for India in T20 cricket! And given that Virat will open for @RCBTweets too, maybe this is where we will see from here onwards.

India going into the 2021 ICC T20 World Cup are likely to start as favorites, especially in home conditions. On Indian pitches, the availability of a sixth bowling option is often weighed in gold. With relatively smaller boundaries, good batting wickets, and the presence of dew on most evenings, going in with only 5 bowlers could prove costly. India themselves, in their two losses of the series, did face the problem of not having the extra bowling option. The need to cover up for one’s overs on his bad day could perhaps decide the fate of the game. Also, under the lights with dew around, it is generally difficult for the spinners to grip the ball, resulting in frequent errors and a hindrance in the discipline. Therefore, the choice of opting for someone else in such cases is a boon, and could also prove match-winning.

Virat Kohli:
” I am going to open in the IPL as well. Have batted in different positions in the past. But I feel we have a solid middle-order now. Will definitely like to partner Rohit at the top. Other guys feel a lot more confident when one of us is still in and is set.”

It is these reasons and these aspects, that were once hidden behind the reality, that make Virat’s move to bat at the top so crucial. India with the said combination can even strengthen their bench with good options, after the return of Bumrah and Shami. The presence of Natarajan, Chahar, Kishan, Sundar, and the much-awaited resurgence of KL Rahul could complete India’s 15 member squad for the World Cup. For now, Virat’s above announcement from the post-match presentation is a heartening one and he, as an opener in T20Is, could well be India’s needed impetus to end the ICC Trophy draught of the last 8 years.