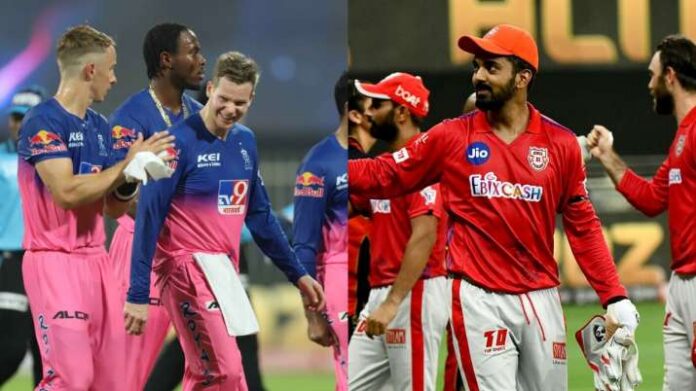 We are hardly 10 days into the 2020 edition of Indian Premier League and the world has witnessed a few of its closest matches already. The encounter between the Kings XI Punjab and Rajasthan Royals at Sharjah was one of the matches to remember. The two teams were involved in an absolute runfest with 450 runs scored in the 40 overs. Either teams had a few performers who took responsibility with sole intention of taking their team home. Though Rajasthan emerged victorious, the match was full of game-changing moments. The topsy-turvy ride of momentum and winning chances had each and everyone around the globe on edge of their seats. Here’s a look at the key junctures of one of the best cricketing matches IPL has ever witnessed.

The two friends from Karnataka, KL Rahul and Mayank Agarawal went on a friendly tour taking on every bowler that came their way. They added as many as 183 for the first wicket in only 16.3 overs hitting bowlers to all parts of the ground. KL Rahul coming out of a hundred in the last match continued his form to score yet another half-century. His knock of 69 though, could only play a second fiddle to Agarwal who went on to score his maiden IPL century. It was also the second fastest by an Indian in IPL, coming off just 45 deliveries consisting of a few stunning shots all around the ground.

2Rajasthan’s comeback with the ball:

The strategic time-out came in the 14th over giving Rajasthan to regroup and strategize to restrict their free-flowing opposition. Smith’s men also managed to curtail the run flow by some margin. Rajpoot, Curran and Archer all persisted with the outside-off corridor and made the use of their lengths well. There were occasional boundaries but they were successful in reducing the run-rate overall. The pressure of maintaining the scoring rate was evident on the batters who also succumbed to attempting a few big hits. After Rahul and Mayank departed, Pooran and Maxwell did try to take charge but only managed to reach 224, perhaps 15-20 runs short of what they expected to be at.

3Smith and Samson give Rajasthan the needed start:

A few years back, Jos Buttler’s promotion up the order for Rajasthan added a new dimension to his approach to the game. Similarly, in the first two matches of this season, Steve Smith has proved his worth as a valuable opener. Honing the duties for the first time in his career, Smith scored a valiant half century last match. He backed it up with yet another 50+ score today with his partner-in-crime, Sanju Samson for company. The duo got together after the wicket of Buttler in the third over and stitched an 81 run stand in just 34 deliveries. Smith’s impactful hitting with the bat early on also set young Samson up for a big score to continue.

4Tewatia makes everyone think his promotion was an untimely one:

The left handed all-rounder Rahul Tewatia was promoted up the order to everyone’s surprise. The decision of the management to send him ahead of an experienced Uthappa seemed to backfire as he took time to settle down. At one point, Tewatia was batting at a strike rate in the 40s having played more than 12 balls. Samson on the other hand continued toiling the bowlers hard to all parts. It felt like Rajasthan had lost plot and Punjab saw an opening to find roads inwards. Tewatia struggled to even hit the middle of the bat hitting a solitary six off his first 22 balls.

5The magic strikes in late for Rajasthan, the zero is now a hero:

Having seen Tewatia struggle in the initial part of his innings, Samson decided to go big taking on the bowling of Glenn Maxwell. He managed to hit a couple of sixes but soon perished to the cause holding out in the deep. The experienced Uthappa who came in next could not get his timing going either, making everyone in the dugout and the fans feel some pressure. Rajasthan, once able to keep the required rate around 11-12 now needed 51 of the last three overs. Sheldon Cottrell and Shami had the responsibility to bowl the deciding overs. The left hander who came onto bowl in the 18th over witnessed an unimaginable miracle. Tewatia hit Cottrell for five sixes in the over almost as if there was a sudden switch in fortunes.

Mr @rahultewatia02 na bhai na 😅 thanks for missing one ball ! What a game congratulations to rr for a spectacular win !!! #RRvKXIP @mayankcricket great knock @IamSanjuSamson brilliant !

Tewatia hit the balls crisp & clean and connected like no one in the innings ever could. Cottrell and Kings XI in general had no answer to Tewatia’s hitting. All of a sudden there the target looked achievable with 21 needed of the last two overs.

Meanwhile, the world also witnessed some exceptional piece of fileding by Nicholas Pooran under pressure. “It is the best fielding effort in T20 cricket ever!” said Kevin Pietersen on air as Pooran flicked a seeming six back on the field saving crucial runs for his side.

6Is there a twist in the tale?:

Uthappa was caught on the boundary on the first ball of the penultimate over off Shami. The match was sure to go down to the wire but no one knew who would manage to hold their nerve. Interestingly, in another unusual promotion, Jofra Archer was sent to presumably finish off the innings with a band. And my word, did he make it look easy. Archer smashed Shami for two consecutive sixes before giving Tewatia the strike off the fourth ball. Tewatia followed him with yet another six, this time also bringing his maiden IPL fifty. He was however caught off the last ball of the over in an attempt to clear the fence yet again. Did it mean a twist in the tail yet again?

With two needed of the Murugan Ashwin over, Rajasthan banked on young Riyan Parag to do the job. However, the youngster yorked himself on the first ball and got bowled on the second trying to play across the line. Defending two off the last ball is most times impossible but given the turns the match had witnessed, anything seemed achievable. Resistance from Punjab came very late though as the new batsman Tom Curran took only one ball to hit it to the fence winning the match comprehensively by four wickets.

It marked the highest ever run-chase in the history of the IPL. It is also the second time that Kings XI lost a close match at the very end. Both teams had a lot of positives as well as negatives to take, only difference being the two points that Rajasthan managed to gain. The Indian Premier League (IPL) has already shown a glimpse of its strength, quality and ability and it’s only about time that another thriller greets the eye.

Rahul Tewatia: “That was the worst first 20 balls that I have ever played. I was hitting the ball very good in the nets, so I had belief in myself and kept going.  I thought I had to believe in myself. It was a matter of one six, after that, I got going. Five in an over went amazing.”