Rohit Sharma is considered as the best opener in limited-overs at the moment. He made his ODI debut for India on 23rd June 2007. In the initial days, he played in the middle order. Till the age of 26, Rohit played a total of 108 matches and scored 2840 with 19 fifties and 3 centuries.

After being asked to open the innings in Champions Trophy 2013, Rohit has completely transformed into one of the best batsmen in the limited-overs side especially ODI format. He has 8 scores of 150 plus in ODIs which is the most by any batsman. Apart from this, the explosive right-handed batsman is the only player to score 3 double centuries in ODI cricket. On 16 different occasions, he has scores of 125+ – which is 2nd most by any player in the world.

Since 2014, Rohit Sharma has the highest individual score by an Indian batsman in ODI. He is the only player to score most centuries in a single World Cup edition. Rohit has 6 centuries in World Cups which is equal to Sachin Tendulkar.

Rohit Sharma mostly depends on the timing of the ball sweetly which looks pleasing to the eye. His ability to put the pressure on bowlers makes him one of the dangerous batsmen in the world.

His biggest positive is that the ability to give him some time and then put pressure back on the oppositions against pacers and spinners which makes him one of the dangerous batsmen in the limited-overs format.

On his 33rd birthday today, we look at the 5 best knocks played by Rohit Sharma in international cricket. 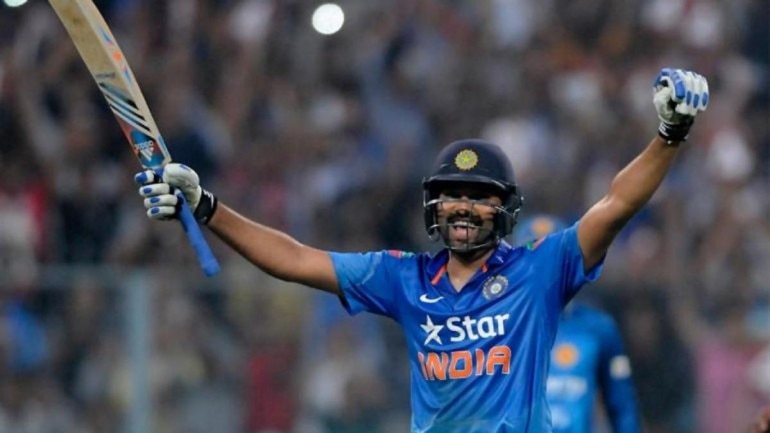 Rohit Sharma produced one of the best knocks in ODI cricket to date. This knock was played against Sri Lanka played at iconic Eden Gardens, Kolkata on 13th November 2014. Indian captain Virat Kohli won the toss and decided to bat first.

Rohit was cautious in the beginning and dropped by Thisara Perera on 4. After losing 2 quick wickets of Rahane and Rayudu, Rohit began to time the ball. He looked in complete control to reach his fifty off 72 balls. After reaching his fifty, Rohit began to accelerate the innings with aggressive stroke-making and created panic among Sri Lankan bowlers. He reached his century off 100 balls. In the next 25 balls, Rohit showed his array of stroke play and completed 150. Rohit and Kohli added 202 runs for the 3rd wicket.

Rohit Sharma took the center stage and completed his 2nd double century in ODIs off 151 balls. In the next 15 balls, he showed his hitting power to reach 250 off 166 balls. He was finally dismissed for a superb 264 off 173 balls off the last balls with 33 fours and 9 sixes which helped India post a massive total of 404 for 5. India bowled out Sri Lanka for 251. For his 264, Rohit was awarded the man of the match.

This knock of Rohit Sharma will be remembered for a long time and the record could not be broken for some time.

Rohit Sharma registered his highest Test score of 212 in the first innings of the third Test match played at JSCA Stadium, Ranchi from 19th October 2019. Indian captain Virat Kohli won the toss and decided to bat first. It was not an ideal start for the hosts as wickets of Mayank Agarwal, Cheteshwar Pujara and Virat to be reduced at 39 for 3. Rohit Sharma faced lots of questions against Rabada and Vernon Philander.

After the initial struggle, Rohit looked in fine touch taking on South African pacers and spinners. He completed his fifty off 86 balls. His knock ensured that India was taken out of trouble. Rohit never looked back and controlled the innings reaching his century off 130 balls. India were 224 for 3 with Rohit not out on 117. On the 2nd day, Rohit continued his positive intent to reach his 150 off 199 balls. He and Rahane added a massive 267 runs stand for the 4th wicket. He completed his 2nd double century of the series from 249 balls. Eventually, the opener was dismissed for a superb 212 off 255 balls with 28 fours and 6 sixes. India declared their innings on 497 for 9. The hosts won the match by an innings and 202 runs. For his superb 212, Rohit was awarded the man of the match.

Rohit Sharma made a strong comeback in the Test matches as he was given a chance to open the innings. He scored 529 runs from 3 matches ( 4 innings) with 3 centuries. 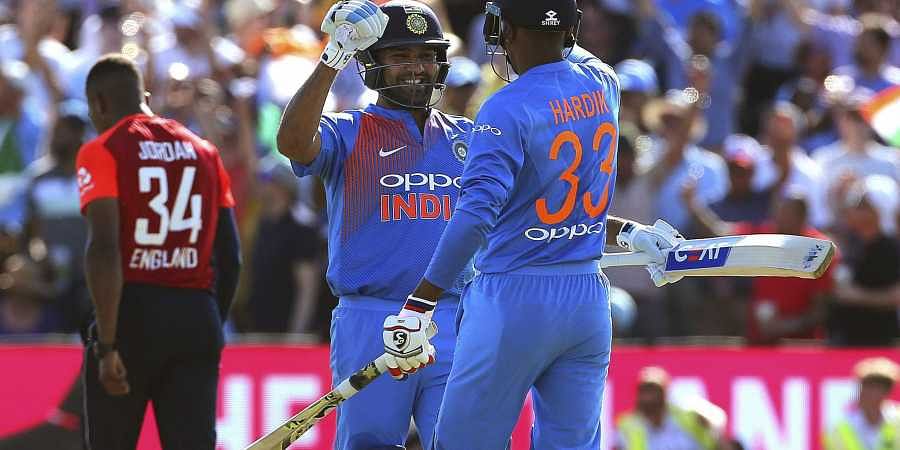 Rohit Sharma produced one of the best innings in the 3rd and deciding T20I match of the series played at County Ground, Bristol on 8th July 2018. Chasing down 199 runs to win, India lost an early wicket of Shikhar Dhawan cheaply.

Rohit Sharma was simply sensational with his stroke play putting England bowlers under immense pressure. India scored 70 for 2 at the end of six overs. It was an amazing display of batting as Rohit reached his fifty off just 28 balls. He smashed the England bowlers to all parts of the ground. The experienced duo of Kohli and Rohit added 89 runs for the 3rd wicket. Hardik Pandya came to the crease and took the pressure from Rohit.

The experience of Rohit came to the fore as he completed his century off 56 balls and remained not out. During his knock, he smashed 11 fours and 5 sixes. India chased down the target with 7 wickets remaining and 8 balls to spare. 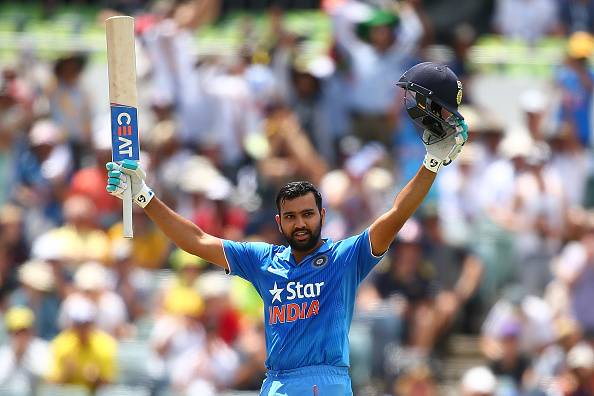 Rohit got off to a decent start with lovely boundaries, before Shikhar Dhawan was dismissed cheaply. He rotated the strike and hit the bad balls away for boundaries and reached his fifty off 63 balls. It was an amazing display of batting by the opener took on Scott Boland and other Australian bowlers. Rohit reached his century off 122 balls. After completing his century, he accelerated the innings to reach his 150 off 155 balls. With some lusty hits in death overs, Rohit remained not out on 171 off 163 balls with 13 fours and 7 sixes. His knock helped India post 309 for 3.

Rohit was simply sensational with his stroke play and showed his power-hitting. Despite his knock, Australia won the match by 5 wickets with 4 balls to spare. 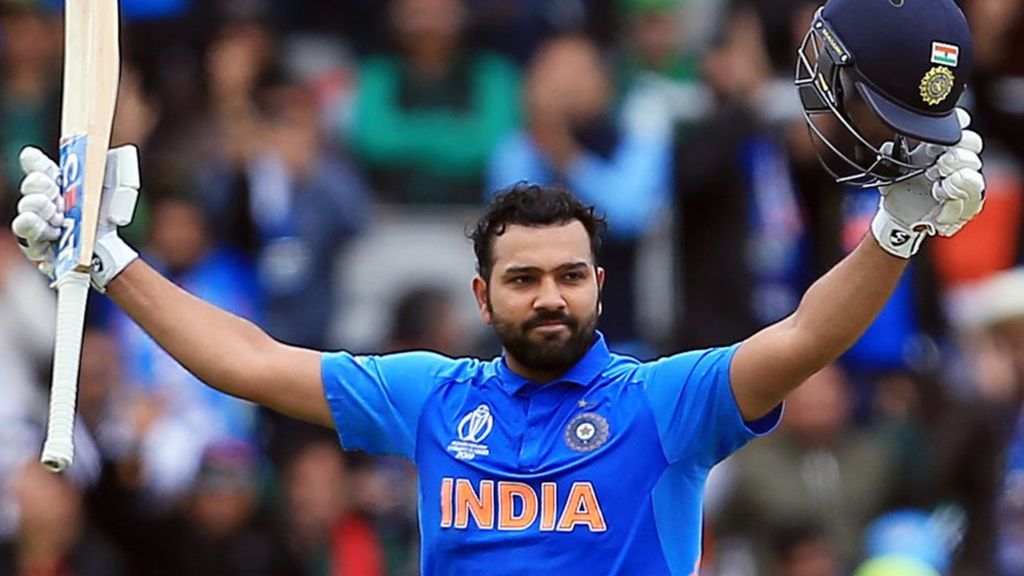 After a match-winning knock of 122* against South Africa, Rohit proved his worth against Pakistan at Old Trafford, Manchester on 16th June 2019. Pakistan captain Sarfraz Ahmed won the toss and decided to field first.

Rohit Sharma was cautious at the beginning but took on the Pakistani bowling line up. He was involved in a mix-up, but Fakhar Zaman throw at the wrong made gave Rohit a chance. After the chance, the opener played with positive intent against Shadab Khan. It was a great display of batting as Rohit reached his fifty off 34 balls.

He and KL Rahul added 136 runs for the opening wicket which laid a strong foundation for a massive total. Rohit continued to make batting look easy taking singles and hitting occasional boundaries against Pakistan spinners and pacers. He completed his century off 85 balls with a single. After reaching his 100, Rohit created more pressure on the Pakistani bowling line. He was finally dismissed trying to hit a paddle from Hasan Ali for 140 off 113 balls which include 14 fours and 3 sixes. Thanks to his knock, India posted 336 for 5 in 50 overs and won the match by 89 runs via Duckworth Lewis Method. For his knock, Rohit Sharma was awarded the man of the match.

Special Knock: Apart from his 100* not out against England, Rohit Sharma made his first T20I century against South Africa at Dharamshala on 2nd October. He made 106 off 66 balls in that match.

He holds the record of the joint-fastest century as he made 118 off 43 balls against Sri Lanka which included 12 fours and 10 sixes. On 6th November 2018, Rohit broke the record of Colin Munro of most centuries in T20 cricket. He smashed 111* off 61 balls with 8 fours and 7 sixes. In all these matches, Rohit was named the man of the match.

Rohit Sharma had a brilliant 2019 year in ODIs. He was the leading runs scorer in 50 overs format with 1490 runs from 28 matches (27 innings) with 7 centuries and 6 half-centuries. Out of these 7 centuries, 5 of them came in the World Cup.

Rohit has become the backbone of the Indian batting line up in ODIs especially in big tournaments. He scored centuries against Australia, New Zealand, England, West Indies.