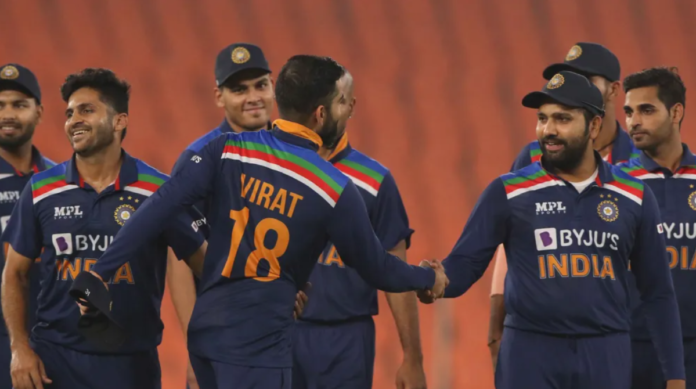 The Narendra Modi Cricket Stadium finally witnessed India defend a total, the first time any team did that in this series. Unlike the first three games, where the ‘Win the Toss – Bowl First – Chase’ mould yield riches, the fourth T20I offered some support to the bowlers in the second innings. Indians were good in either half of the game with Suryakumar Yadav and Shreyas Iyer leading charge with the bat and the Indian pacers leading it with the ball.

Rohit Sharma departed early and the Suryakumar Yadav walked in for his first international innings. But little did he himself know that he would open an account with a six. To a ball aimed into the body by Jodra Archer, Surya swivelled across to play a calypso hoic over long leg for six. And that is how India’s revelation with the bat began. The young Mumbaikar put up crucial stands with Rahul and Pant, manipulating the situation well and hitting the bowlers to all parts. The most exquisite of his shots were the backfoot punches, emphasizing the amount of time he had on the ball. However, it was the same long leg fence where he was eventually held by Dawid Malan. The dismissal raised eyebrows and flaked criticism from all corners of the world, after a seemingly evident bump ball was given out – reasoned ‘not conclusive’.

Despite both Rohit and Kohli misfiring, the stage was set for India’s middle order to pack a punch. 180 looked like a par score on the surface, and Pant and Iyer did help India get there. The little 3-ball stint from Shardul Thakur at the very end also proved useful, giving India a few more runs to bowl at. Overall, India certainly looked in the rhythm and played the situations well. Even with the ball, the impetus was laid by Bhuvneshwar Kumar’s maiden over and Hardik Pandya’s impressive spell with the new balls. Though the two spinners did go for runs in the middle overs, the Indian bowlers kept chipping in England wickets at regular intervals.

The only English threats, Bairstow and Stokes scored briskly off the spinners in the middle overs. While Bairstow was undone by the spin of Chahar, Thakur got the better of Stokes with a slower delivery. He also went on to dismiss Eoin Morgan the very next delivery making it two-in-two and pocketing the match for India then and there. With just three overs left and the English tail exposed, it was only a question of discipline and accuracy for the Indian bowlers. Each of Hardik, Bhuvneshwar and Shardul bowled exceedingly well keeping the England lower order 8 short of the target. They showed great skills with the wet ball and ensured that the ‘pouring’ dew did not affect the outcome of the game.

Big positives for India today: SKY and Shreyas batting freely, and Shardul emerging as a player of all-round talents But also, the craftiness of Pandya, the bowler, and the return of Bhuvi. The last of those is so important.

A win for India sets up the series well for a photo-finish. Both teams have had their share of fortune, blunders and brilliancies but it will all come down to the decider and the team’s approach. It would also be interesting if the toss plays a part in the final T20I on Saturday. But given the conditions today, one expects no less than a nail-biting and a thrilling finish.