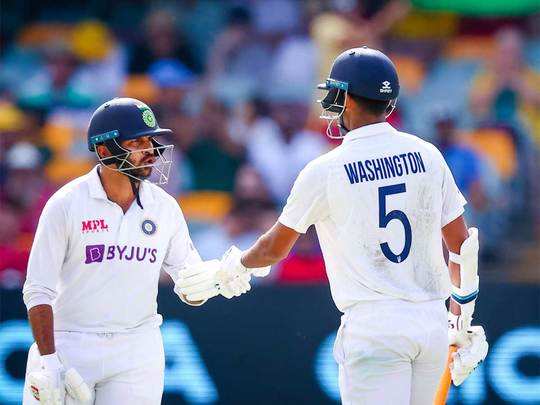 Has India found their like-to-like replacement for Ravindra Jadeja? Is Shardul Thakur the seam-bowling all-rounder that India has been looking for? Well, a single innings is too early to judge and too early for much to be expected. But just what was on display at the Gabba on Sunday was impressive, authoritative, and pleasantly assuring.

Washington Sundar on debut and Shardul Thakur in only his second Test innings were exposed to the Australian bowling attack with India trailing by over 150. Given the fragility of the Indian lower middle order and a non-wagging Indian tail, a giant lead beckoned Australia. However, the two young Indian batsmen at the crease were determined to fight till their very last. Sundar with his last first-class match played in 2018 and Thakur with a first-class average of only 16 was watchful but did not let the loose balls get away without punishment. They capitalized well on each and every scoring opportunity, negated the occasional short-ball extremely well and to everyone’s surprise, drove crisply through the off as well as the on. A few of Thakur’s off and on-drives in fact were almost Kohli-esque by what everyone felt on air.

On the other hand, a few of Sundar’s cut shots behind square, drives through the covers, and the technique to especially counter Nathon Lyon was phenomenal. The one particular sweep that he hit off Lyon for a six post-Thakur’s dismissal was perhaps the highlight of his illustrious innings. Either batsman reached their maiden half-century and irritated the tiring Australian bowlers. The two added 123 for the seventh wicket and helped India to reduce the seemingly mammoth lead to a mere 33 runs. The contribution of these two youngsters once again went on to prove the mettle of the Indian team as a whole. As they have throughout the series, India once again inspired a late comeback to possibly even guarantee at least a draw at fortress-Gabba with the rains predicted on Day 4 and 5.

There are still a couple of things to not fail to mention whenever we talk about this Indian side. One, the effort Ravi Shastri and Virat Kohli have put to build in this side, across formats, cannot be neglected. In Tests, the same Indian side that virtually never picked up 20 wickets overseas, has done it almost always in the last couple of years. The side that could never replicate the Indian batting of the 2000s has resurrected themselves through the transition and the Indian side that marked a statement overseas under Ganguly and Dravid and started winning individual Tests under Dhoni has now made it a habit to conquer the series. The credit also goes to the players who’ve believed, updated, and prepared themselves to perform at the highest level.

The other reason for India’s comebacks in the last 3 Tests is Ajinkya Rahane’s calm and composed head. He has executed all his plans well, has been intuitive with the captaincy, and importantly, has made the most optimum use of all available resources. “The bowler’s captain”, as Ishant Sharma described him, has persisted with long bowling spells to produce a wicket more often than not. It will still be unfair to compare Rahane and Kohli and give any food for a replacement thought, but just the fact that the Indian vice-captain has proved to be an efficient and aggressive leader himself is enough for Indian cricket to prosper.

Back to the Gabba Test, India, who failed to take wickets before the end of the day’s play, will look to restrict the Aussies to as minimum as possible. The moisture in the morning and the predicted overseas conditions throughout the day are sure to aid the Indian speedsters and wickets could well be only around the corner. The unpredictable weather at Gabba is expected to play a spoilsport. In that case, India might be able to defend their title rather easily, albeit in the fashion they wouldn’t have preferred.

Having said, at the end of it whatever be the result, the India tour of Australia 2020-21 has set a great template defining Test cricket for generations to come.