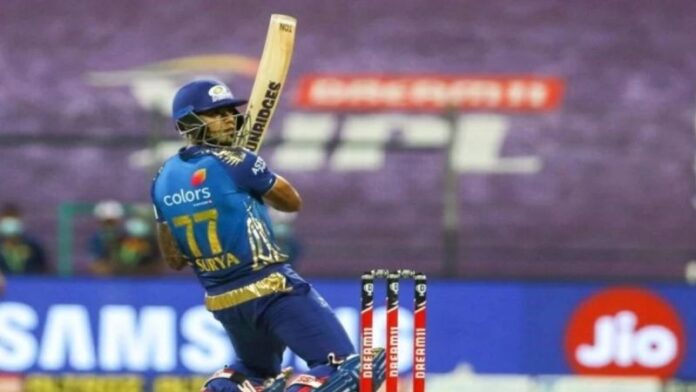 Mumbai Indians rode on heroics from Jasprit Bumrah and Suryakumar Yadav to trash the Royal Challengers Bangalore by five wickets. The win almost guarantees Mumbai a Playoff qualification, a fact unlikely to be changed. What it also does is that it puts Bangalore on spot needing a win to qualify and two to secure a Top 2 spot from the remaining two games. It also opens up an unprecedented scenario of five teams finishing up with 16 points with NRR deciding fate.

RCB choked with the Bat:

Put into bat by MI’s stand-in captain Kieron Pollard, Bangalore openers Paddikal and Philippe began briskly. The young duo hit their shots freely and took on the attack to the bowlers. They also countered the spin of Pandya and Chahar well to score at a good pace in the powerplay. Philippe was impressive with his footwork against the spinners only to be out stumped in the 7th over. However, the determinance and grit of Paddikal saw RCB through. The left hander was elegant on the OFF, exuberant on the ON and magnificent straight down the ground. He also brought his fourth fifty of the tournament due course of his innings of 74. It set the tone well and kept the momentum going even after Kolhi’s dismissal.

The Royal Challengers Bangalore have had an eternal problem of losing their plot in the middle overs this year. Despite honing the likes of Virat and ABD in their top 4, the team has struggled to keep the scoreboard going in the middle overs. They have also lost wickets at crucial junctures of the game creating a hiatus by the death. However, the hiatus this time was more induced than created. Jasprit Bumrah and captain Kieron Pollard combined well to put RCB onto the backfoot in a matter of two overs. RCB lost as many as 4 wickets for 7 runs and enabled a complete shift of momentum. That phase right there was the turning point of the game and Bangalore had absolutely no coming back from there.

The only way out was wickets in the power play. The unavailability of a certain Navdeep Saini did hurt but the Mumbai batsmen were anyways too experienced to be deceived.

SKY’s the limit for the Mumbai Indians:

It’s interesting how Mumbai Indians have produced one match winner after the other over the years. They have had a balanced combination for a couple of years and have always found a go-to person every game. This time, it was Suryakumar Yadav the young Mumbaikar coming to the fore. Despite timely dismissals on the other end, SKY kept the asking rate in check and released pressure off the new batsman. His unbeaten knock of 79* pocketed the game for MI and perhaps made a bold statement considering his omission from the recently announced Indian squad for the Australian tour. Surya, in his celebration after hitting the winning runs, also gestured a ‘Main Hoon Na’ emotion indicating that the young man is here to stay.

Being a technically sound player of spin bowling, Surya was mesmerizing with his sweeps and uncharacteristically brilliant with the lofted cover drives. He also exemplified technique attacking the experienced Chahal, hitting inside out with the spin rather than playing straight to his stock ball outside-off. Though Chahal managed to dismiss a couple of batsmen on the other end, him going for runs demoralised the RCB bowling. The likes of Dale Steyn and Mohammad Siraj went for plenty in their second spell and so did their dependable all-rounder Chris Morris. Suryakumar finishing the match with a lofted extra-cover drive was only an apt justice for his match-winning contributions.

The Battle for the Playoffs:

The general notion in and around IPL is that a team only needs to win 8 games to qualify for the Playoffs. However this year, the things have turned up much more exciting with a chance of MI, RCB, DC, KXIP and KKR all ending up with 8 wins. The year has been immensely productive with regards to the number of close games and nail-biting finishes and this possible close call with the points table might once again reiterate the reason why IPL is considered to be the best in the world.

As it has been throughout this season, for us fans and story-tellers, the India Premier League (IPL) this year promises a great story to tell.