Under the captaincy of Virat Kohli, the Indian Cricket Team registered an emphatic 3-0 whitewash win over South Africa in the recently concluded Test series. It was a team performance by the number 1 ranked Test side who outplayed the African side in all departments. They registered their 11th successive home series win.

Apart from the first innings in Vizag where South Africa scored 431, the Indian batsmen and bowlers dominated the South African team at Pune and Ranchi. Every team contributed to the team’s success which led to such a great performance from Virat Kohli led side. The Indian team is on the top of the points table in the ICC Test Championship with 240 points. 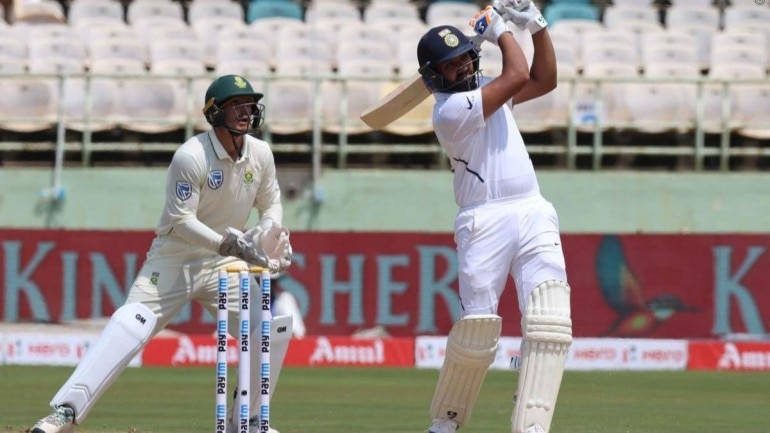 After being successful in ODI and T20I format, Rohit Sharma was given a chance to open the innings in the Test series against South Africa. He struggled initially against Rabada and Vernon Philander with the new ball in the first Test match at Vizag. Rohit then showed his class putting the South African bowlers under pressure.

He took on South African spinners and never allowed them to settle. It was an amazing display of batting by Rohit who remained not out on 115. On the 2nd day, he continued his aggressive approach and was finally dismissed for a brilliant 176 off 244 balls with 23 fours and 6 sixes. He and Mayank Agarwal added 317 runs which laid a strong foundation for a big total.

In the 2nd innings also, Rohit Sharma took the time initially and then put the South African bowlers under pressure with an array of stroke play. He scored a quickfire 129 off 147 balls with 10 fours and 7 sixes. His knock helped India declare their innings on 323 for 4. For his twin centuries, Rohit was named the man of the match.

In the second Test match played at Pune, Rohit Sharma was dismissed cheaply for 14 by a beauty from Kagiso Rabada. Despite his failure, India posted a massive total of 601 for 5 declared.

Rohit showed great composure in the third Test match at Ranchi. The pitch had a lot of movement and India had lost wickets of Mayank Agarwal, Cheteshwar Pujara, and Virat Kohli. After going past the new ball, Rohit took on South African bowlers and remained not out on 117. He continued his positive approach on the 2nd day also and completed his maiden double century in Test matches. Rohit was finally dismissed for career-best 212 off 255 balls with 28 fours and 6 sixes. After a disappointing Test series in West Indies, Mayank Agarwal was playing his first home series in Test matches and proved his worth. He made his Test debut against Australia at MCG and succeeded against top-quality bowling.

In the first Test match at Vizag, Mayank struggled against Rabada and Philander. He was simply sensational with his stroke play against the pacers and spinners. At the end of day 1, Mayank remained not out was not out on 84. He continued his positive intent on the 2nd day also with aggressive stroke play and making life tough for South African bowlers. Mayank posted his career-best score of 215 off 371 balls with 23 fours and 6 sixes. In the 2nd innings, he failed and scored just 7 runs.

In the 2nd Test match played at Pune, he struggled against the new ball again. It was a good opening spell by Kagiso Rabada and Vernon Philander. With Rohit dismissed, he remained steady with his technique to reach his century. He scored 108 off 195 balls with 16 fours and 2 sixes. His knock laid a strong foundation to build a massive total.

He was dismissed cheaply by Kagiso Rabada in the first innings of the 3rd Test match. In the entire series, Mayank scored 340 runs from 4 innings.

Ravindra Jadeja has proved his worth as an all-rounder with both bat and ball in the Test series against South Africa. He was promoted at number 6 ahead of Ravichandran Ashwin and Wriddhiman Saha and did a remarkable job.

In the first Test at Vizag against South Africa, Jadeja remained not out in both innings with scores of 30 and quick-fire 40 off 32 balls. He played with positive intent and took on South African bowlers.

Jadeja again showed his class in the first innings of the 2nd Test at Pune. He came to the crease and took the attack against a tired South African bowling line making 91 off 104 balls with 8 fours and 2 sixes. After his dismissal, Kohli declared their innings on 601 for 5.

In the first innings of the third Test at Ranchi, Jadeja scored 51 off 119 balls. He scored a total of 212 runs from 4 innings.

He was exceptional with his bowling during the Test series. In the first innings of the first Test at Vizag, Jadeja gave away 124 runs and took just 2 wickets. He came back strongly in the 2nd innings picking 4 for 87 helping India breaking the backbone of South African batting line up on the final day.

In the first innings of 2nd Test at Pune, Ravindra Jadeja picked 1 wicket for 81 in 36 overs. He bowled with good line and length in 2nd innings with figures of 3 for 52 in 21.2 overs. It was a disciplined bowling effort by Jadeja who never allowed South African batsmen to score runs easily.

After India declared their innings on 497 for 9 in the first innings of 3rd Test at Ranchi, Jadeja bowled with great accuracy with figures of 2 for 19 in 14 overs. In the 2nd innings, he created pressure on South African batsmen to take 1 for 36. Jadeja took a total of 13 wickets and was one of the key reasons why India whitewashed South Africa. Mohammed Shami continued his superb bowling form on good batting pitches that were produced in the Test series against South Africa. After being underutilized in the first innings at Vizag, Shami stunned the visitors with great reverse swing bowling dismissing Bavuma, Faf du Plessis, de Kock with beauties, and finished figures of 5 for 35 helping India register a massive 203 runs win.

After India posted 601 for 5 in the first innings of the Pune Test, Mohammed Shami produced a lethal spell dismissing Nortje and Bavuma on 3rd day. He finished with figures of 2/44 in 17 overs. Following on, Shami picked 1 wicket for 34 runs in 9 overs.

The third Test at Ranchi saw some brilliant bowling by Mohammed Shami who troubled the South African batsmen with quick pace. After declaring their innings on 497 for 9, Shami got big wicket of Dean Elgar on day 2 and then dismissed Dane Piedt. He finished with figures of 2 for 22 in 10 overs.

Deciding to follow on, Shami was at his lethal best-taking wickets of Zubayr Hamza, Faf du Plessis, and Temba Bavuma. He created so much pressure along with Umesh Yadav and finished with figures of 3/10 in 10 overs.

Mohammed Shami took 13 wickets from 6 innings and made sure that India whitewashed South Africa by winning the third Test by an innings and 202 runs. Umesh Yadav was bought as a replacement for Jasprit Bumrah. He was not included in the playing XI for the first Test match played at Vizag.

With the conditions in Pune helpful for fast bowlers, Virat Kohli included Umesh Yadav in the playing XI. After India posted 601 for 5 declared, Yadav got wickets of Aiden Markram, Dean Elgar, and de Bruyn. He bowled with pace and troubled the South African batsmen with a swing. Yadav finished with figures of 3/37 in 13 overs.

In the 2nd innings too, Yadav again was at his lethal best-taking wickets of de Bruyn, Vernon Philander, and Kagiso Rabada. He ended with figures of 3/22 in 8 overs.

After an impressive 2nd Test, Yadav was retained in the playing for the 3rd Test at Ranchi. While batting, Yadav entertained the Ranchi crowd with a quickfire 31 off 10 balls. After posting 497 for 9 declare, the pace bowler stunned Quinton de Kock with a deadly bouncer. He got South African captain Faf du Plessis with a beauty and then got the wicket of debutant Geroge Linde. Umesh Yadav took 3 for 40 in 9 overs.

Deciding to follow on, Yadav again was on the mark with a beauty to dismiss de Kock. He got the wicket of Heinrich Klassen and made life tough for South Africans. Umesh took 2 for 35 in 9 overs.

Umesh Yadav has been not given a chance to play in the XI for quite some time but impressed with his bowling against South Africa with 11 wickets from 2 matches ( 4 innings).