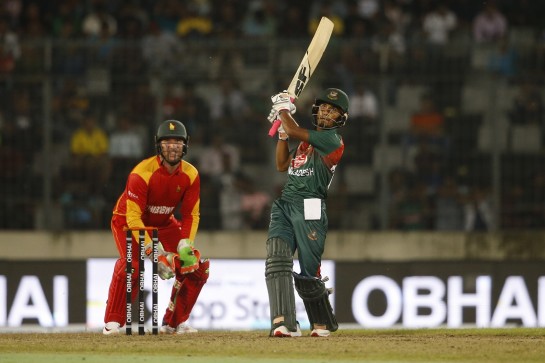 Thanks to Afif Hossain and Mossadek Hossain partnership, Bangladesh registered a thrilling 3 wicket win in the opening match of the Tri-series played at Sher-e Bangla Stadium, Mirpur on Friday.

In a rain-curtailed match reduced to 18 overs a side, Bangladesh captain Shakib AL Hasan won the toss and decided to bowl first. It was a great start for the hosts as Taijul Islam got breakthrough getting the wicket of Brendon Taylor for 6. Zimbabwe captain Hamilton Masakadza took on Bangladeshi bowlers. The power play overs were reduced to 5 overs. At the end of 5 overs, Zimbabwe were 30 for 1.

After the power play overs, Zimbabwe captain played some lovely strokes. The Bangladeshi bowlers made a strong comeback to pick wickets of Craig Ervine, Maskadaza, Sean Williams and Timcyen Maruma leave Zimbabwe in tatters at 63 for 5. Ryan Burl and Mutombodzi steadied the Zimbabwean innings taking singles and hitting occasional boundaries. Burl was in simply great touch against Bangladeshi captain Shakib AL Hasan hitting him for 30 runs and reached his 50 of 28 balls. There were floodlights failure which halted the innings. It was an amazing hitting by Burl and Mutombodzi who added 81 unbeaten runs for the 6th wicket. Zimbabwe posted a competitive total of 144 for 5.

Chasing the target of 145 runs to win, Bangladeshi openers Liton Das and Soumya Sarkar got the team off to a steady start adding 26 runs. Chatara and Jarvis broke the backbone of the Bangladeshi batting line up reducing them to 29 for 4. Bangladesh scored 34 for 4 at the end of 5 overs.

Zimbabwe bowlers put Bangladesh under immense pressure and left them in tatters at 60 for 6. The young Afif Hossain playing his 2nd match showed class with power hitting and created pressure on Zimbabwe bowlers. Mosaddek Hossain also gave him full support. It was a brilliant display of batting by Afif who reached his fifty off just 24 balls. In the last over Afif was dismissed for 52 of 26 balls. Afif and Mossadek Hossain added 82 runs for the 7th wicket. Mohammad Saifuddin hit the winning run to help Bangladesh register a thrilling 3 wicket win.

The 2nd match of the Tri-series will be played between Zimbabwe and Afghanistan tomorrow at the same stadium.