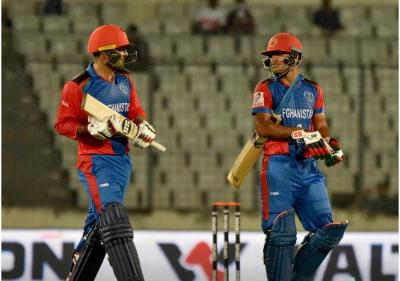 Afghanistan began the Tri-series with a comprehensive 28-run in the 2nd match played at Sher-e- Bangla Stadium, Mirpur on Saturday. Najibullah thrashed the Zimbabwean bowlers as Afghanistan scored 197-5 before their bowlers restricted Zimbabwe to 169-7 to equal their own record of 11 consecutive wins in T20 Internationals.

Zimbabwe captain Hamilton Masakadza won the toss and decided to field first. The debutant Rahmanullah Garbaz and Hazratullah Zazai played with positive intent taking on Zimbabwe bowlers. Gurbaz survived few chances and continued to hit big shots. Tendai Chatara got the breakthrough dismissing Zazai for 13. Both Afghanistan openers added 57 in 5.4 overs. At the end of 6 overs, Afghanistan were 58 for 1.

Sean Williams got the wicket of Gurbaz to stop the flow of runs. The Zimbabwe bowlers kept the lid and reduced Afghanistan to 90 for 4. Najibullah Zadran and Mohammad Nabi wreaked havoc with 7 sixes in 7 balls which created so much pressure on Zimbabwe bowlers. The explosive Zadran reached his 50 of 22 balls. Mohammad Nabi also played a blinder of an innings scoring 38 of 18 balls. Zadran and Nabi added 107 runs off 40 balls. Nabi was dismissed off the last ball by Chatara. Afghanistan posted 197 for 5 in 20 overs.
Chasing the target of 198 runs to win, Brendon Taylor put the pressure on the Afghanistan bowlers. Zimbabwe captain Masakadza was run out for 3 in a mix-up. Zimbabwe openers added 25 runs for the opening wicket. At the end of 6 overs, Zimbabwe was struggling at 42 for 3.

After the power play overs, Mutombozi and Burl put on 37 runs for the 5th wicket. Regis Chakabva scored a quickfire 42 off 22 balls but it was enough for Zimbabwe to go past the line. Neil Madizva also played some lovely strokes which were not enough. Zimbabwe ended at 169 for 7. Rashid Khan and Fareed Ahmed took 2 wickets each. Afghanistan won the match by 29 runs.

The next match will see Afghanistan take on Bangladesh at Dhaka tomorrow.