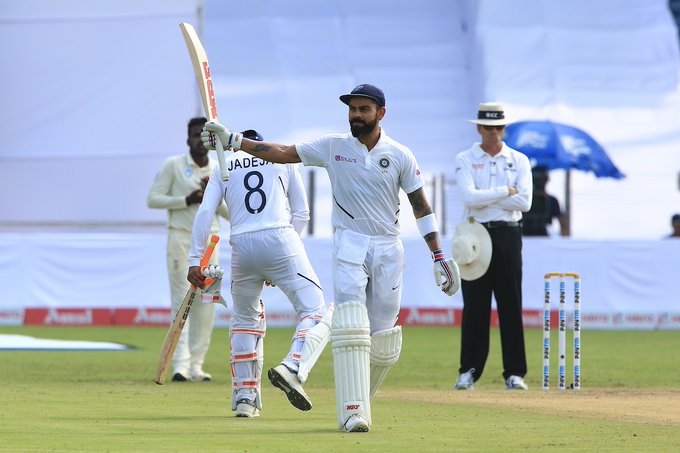 Thanks to Virat Kohli 254 and Ravindra Jadeja 91 runs , the Indian Cricket Team ended the 2nd day against South Africa in a commanding position played at MCA Stadium, Pune on Friday.

Starting on the overnight score of 273 for 3, Virat Kohli and Ajinkya Rahane faced some tough questions against Vernon Philander and Kagiso Rabada. The Indian captain looked solid with his defensive technique while Rahane struggled to score runs. After the initial first hour, Rahane completed his fifty off 141 balls while Kohli reached his 26th Test century off 173 balls. It was a brilliant partnership by both these experienced batsmen. India went into lunch break at 356 for 3.

After the lunch break, Kohli and Rahane continued to grind the South African bowlers down with good defensive technique. Maharaj got breakthrough for South Africa dismissing Rahane for 59. Kohli and Rahane added 178 runs for the 4th wicket. Ravindra Jadeja was promoted ahead of Saha and Ashwin. Kohli on the other hand continued to play on his merry way to reach 150 off 241 balls. India went into the tea break at a commanding position at 473 for 4.

Kohli and Jadeja increased the scoring rate after tea break which deflated the South African bowling line up more. Kohli reached his double century off 295 balls while Jadeja made his fifty off 79 balls. Kohli was lucky to survive a chance as was caught by Faf du Plessis but Muthuswamy had overstepped. The Indian captain continued to pile on the misery reaching his 250 off 334 balls. To reach his century, Ravindra Jadeja was dismissed for a quickfire 91 off 104 balls. Jadeja and Virat Kohli added 225 runs for the 5th wicket. India declared their innings on a massive total of 601 for 5.

It was perfect start for the Indian team as Umesh Yadav got the breakthrough dismissing Aiden Markram. Yadav produced another wicket for India as he dismissed Dean Elgar cheaply. Bavuma and de Bryun played few good strokes before Mohammed Shami got Bavuma out with a review. Nortje helped South Africa to the 2nd day at 36 for 3.