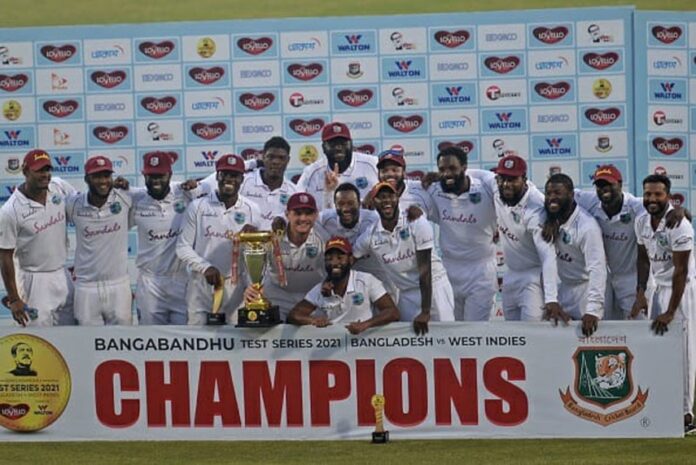 Jomel Warrican caught the edge of Mehidy Hasan’s bat and the untiring, Rakheem Cornwall completed a good low catch to his right to send tremors of joy through the West Indian islands. The West Indies cricket team, void of its veterans whitewashed Bangladesh 2-0 in their own backyard. Much like what the Indians did in Australia, the Windies completed a series win in the sub-continent. Once again, on the verge of being written off, West Indies have made a bold statement with sheer cricketing brilliance.

Kraig Brathwaite, the captain in the post-match presentation said, “People will be proud. People wrote us off. But we kept it simple, enjoyed it. And proved them wrong.” The belief, the pride, and more importantly, the determination in the voice of the skipper symbolized the character that the team structured itself with. The two victories as well were of contrasting nature with the cricket of the highest quality. One, chasing the highest-ever target in sub-continental conditions and the other defending a modest, yet trick total on a slowish track. One where a debutant, Kyle Mayers, opened the floodgates on the Bangladesh bowlers, while the other, one of the experienced players of the squad bowling a marathon to seal the deal.

There was not a single West Indian player to underperform throughout the Test series. The number 4, Nkrumah Bonner – also the adjudged Man of the Series – anchored the Windies innings most times and allowed the Windies batting to revolve around him. He was crisp with his footwork, looked stable at the crease, and did not allow the bad balls to go unpunished. The likes of Kyle Mayers, Joshua De Silva, as also captain Kraigg Brathwaite played crucial roles in uplifting the team from testing situations. Kyle Mayers’ double century in the First Test was arguably one of the best innings a second innings of a Test match had ever seen. The keeper-batsman De Silva too hid behind the milestone knocks of Bonner and Mayers, played a crucial role being the glue to Windies’ bounded batting line-up.

The same pivot in the bowling department was provided by Rakheem Cornwall. The off-spinner with his high-arm and open chested action kept coming at hosts one after the other. He bowled insanely long spells, ran marathons of spin bowling almost all day, headlined the press-conferences, and took wickets on a stage that he just seemed meant to be. Cornwall’s 9 wicket haul and especially the 30 consecutive overs spell in the 2nd Test (to go along countless hours in the slips) challenged the temperament of the Bangladesh batsmen. Also ably supported by the left-arm spin of Jomel Warrican and gentle off-spin of Kraigg Brathwaite, Windies pacers were left with very little to do. The kind of spin attack that emerged from the lands of tall-aggressive-fast pacers and hard hitters emphasized the depth of cricket in the West Indies.

It surely has to rank as one of the greatest achievements in recent years for @windiescricket to win both test matches here in Bangladesh. Kraig Braithwaite was outstanding as a captain today. Well played gentlemen🙌🙌🙌🙌.

Was it really the most perfect West Indies Test series ever? Certainly not. There were patches where the visitors struggled badly, with the bat, with the ball, or even in the field. The number of extras West Indies conceded in the Second Test, the kind of dismissals even set batsmen had, missed chances, opportunities, and injury issues, this series had it all. But it was the grit, temperament, determination, and more importantly the sound belief and execution that won them the series.

It pretty much also summarizes what Test cricket has been for the last month and a half across the globe. If this does not define Test Cricket and if this does not make you fall in love with the sport, I don’t know what will.