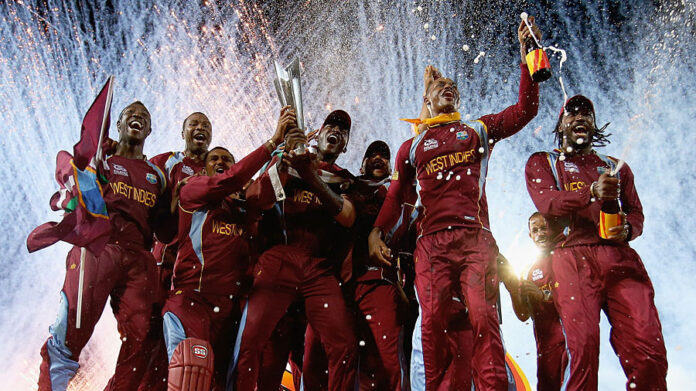 West Indies will begin their defense of the ICC T20 World Cup crown later this year. A phenomenon that barely held ground a few months ago has suddenly gained enough promise to make it look possible. In the last couple of months, the Windies team welcomed their T20 superstars back in the team and since then, they’ve looked as threatening as ever. The return of the likes of Gayle, Russell, Bravo, Fletcher, and Simmons has been inspirational.

They might have lost the series against South Africa 2-3, but the fightback against Australia winning the series 4-1 was reminiscent of the West Indies we have known in the past. Right from the very top where they possess the luxury of choosing between Lendall Simmons, Evin Lewis, and Andre Fletcher, the team is filled with multiple match-winners, each capable of turning the game single-handedly. Chris Gayle in his new avatar at No.3 hasn’t had a consistent run in the 8 games, but he’s made his presence felt in the team’s needs. In the third T20I against Australia, Gayle smacked a 38-ball 67 to see the team through after early wickets. The 42-year has also been amidst wickets with his occasional bowling and is in all readiness to take the UAE by storm.

Trust and Belief in the senior players are the key:

The team as well has put a lot of trust in these senior players, giving them well-defined roles. Both Keiron Pollard and Phil Simmons have connected with the returning pros and have valued their rich presence.

The 42-year Universe Boss in a post-match conference after his match-winning innings said, “I want to dedicate this half-century and milestone to West Indies, my team-mates, especially Kieron Pollard. We had a team meeting before the game and…he let me know where I stand within this team and he wanted me to go and express myself. So I’m very grateful for that pep talk because sometimes it doesn’t matter how great you are, you need a bit of a talk sometimes.

“I have to commend those senior guys, they played a fantastic part with what happened today. With this strength and unity, we’re playing some great all-around cricket and I’m really pleased to win this series.”

Moving down in the batting order from Gayle, one is likely to encounter serious threats in form of Nicolas Pooran, Kieron Pollard, Andre Russell, Dwayne Bravo, and Fabian Allen. The likes of Darren Bravo, Jason Holder, Shimron Hetmeyer amongst others are also in serious contention of getting multiple chances in the build-up to the World Cup. The number of big-hitters that this Windies batting lineup possesses is unreal. Each of the middle-order batters has created an impact sometime or the other, in the last 10 games they’ve played. Even together as a unit, they’ve complemented each other, allowed each other enough time to settle in, and have been quick to pounce on opportunities to score and rotate strike. The emergence of Fabian Allen as a pinch-hitter at No.7 or 8 has been a blessing as well.

The fact that other than Pooran, the wicket-keeper, each of the next four middle-order players are all-rounders adds an interesting dimension to the squad. West Indies currently have a leeway of experimenting freely with the No.8 slot with the liberty to choose absolutely anyone.

The upcoming bowling magicians for the West Indies:

With the all-rounders covering up most of the Windies’ bowling, the team combination would not allow more than two to three bowlers to take part. It’ll therefore be interesting to see how they manage the surplus options available. Obed McCoy and Hayden Walsh Jr. have been mighty impressive in the games they played in and are likely to walk into the side without any fuss. The third bowling option, if the Windies wish to go with, will then be a choice between the likes of Sheldon Cottrell, Oshane Thomas, the veteran Fidel Edwards, and Akeal Hosein.

Pace on the ball early on, and pace off it at the end are skills that each of the Windies bowlers have mastered. The change of pace and trajectory from the spinners has been impressive right through this season. Might not be as threatening and as heavy on paper as their batting line-up but the West Indies bowlers with their current form are quite capable of producing magic on the field.

West Indies will set off on their journey for the title defense in Group 1 alongside Australia, England, South Africa, and the two qualifiers. ‘Group of Death’ as it seems to be, will test the West Indies power-hitters to the bits but could well set them up early to have a successful tournament.

Every time one writes the Windies off in international cricket, they find a way of coming back at it. Be it Test cricket, ODI cricket, or their favorite T20 cricket, the calypso kings for sure know the recipe of making it count when required. The two-time World T20 Champions under Kieron Pollard are here again to make a bold statement, and well, if fortune favors they might indeed make one.