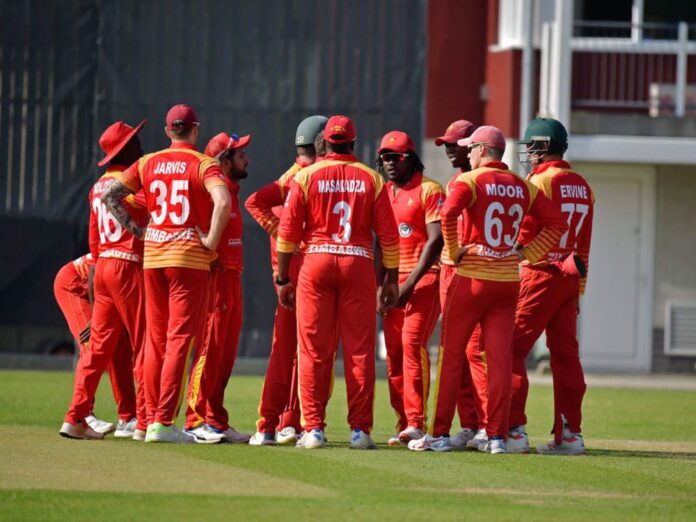 Zimbabwe cricketer and all-rounder Ryal Burl posted a picture of him gluing his shoes in order to play cricket. The left-hander exclaimed that the entire team went through the gluing process pretty much before every series. Burl, in his tweet, requested a sponsor for the Zimbabwe cricket team to help them play to their best potential, void of any logistical issues.

Any chance we can get a sponsor so we don’t have to glue our shoes back after every series 😢 @newbalance @NewBalance_SA @NBCricket @ICAssociation pic.twitter.com/HH1hxzPC0m

His appeal was heard by multiple fans from over the world as messages of help started pouring in. The footwear giant Puma too replied to Burl saying they got it covered, suggestive of their interest to sponsor the cricketer. Moments later, Burl put up a tweet thanking everyone who offered help and thereby announcing his signing with Puma for footwear. The international cricketer, however, brought to light the current condition of the poor cricket boards.

I am so proud to announce that I’ll be joining the @pumacricket team. This is all due to the help and support from the fans over the last 24 hours. I couldn’t be more grateful to you all. Thanks so much @PUMA

Zimbabwe cricket has not been in the riches financially in the international cricket world. After being suspended in 2019 and disallowed to take part in the T20 World Cup Qualifiers later that year, Zimbabwe was reinstated by the ICC in 2020. Following this, the cricket board also scheduled a few games, both home and away against the international teams of Sri Lanka, Pakistan, Afghanistan, and Bangladesh. They were also the first in 12 years to travel to Pakistan for a full-fledged cricket series last year, and also host them for a brief series recently. Having said that, the cricket board hasn’t improved much financially.

The African nation was one of the driving forces in international cricket in the early 2000s with the likes of Heath Streak, Alistair Campbell, Andy, and Grant Flower, Tatenda Taibu, Henry Olonga, and Neil Johnson, but failed to produce stars consistently post their retirement. While there still exist a few famous faces like the keeper-batsman Brendon Taylor in the side, the team hasn’t had a lot to cheer about in recent years. They fell out of the automatic qualification spots for the World Cup and have also failed to even qualify for its last few iterations.

Since 2010, Zimbabwe has won only 6 ODI series with Bangladesh and Sri Lanka being the only notable oppositions they have beaten. They have made it to the news from time to time be it for beating Pakistan in a T20 game last month or bringing India down to a vulnerable position in the 2015 World Cup match, collectively the team has lacked the consistency and the match-winning capability. Pakistan’s former cricketer Ramiz Raja recently talked about how playing with teams like Zimbabwe would affect the viewership for Pakistan Cricket in the future.

Being looked down upon by many, the resurgence of Zimbabwe cricket now depends on their cricket board’s stability financially. It is highly unfortunate to see players go to social media for help for even the basic sporting needs. Perhaps, it is up to the ‘Big Three’ and the ICC to believe and get, not only Zimbabwe but also the other smaller boards together for the development of the game.